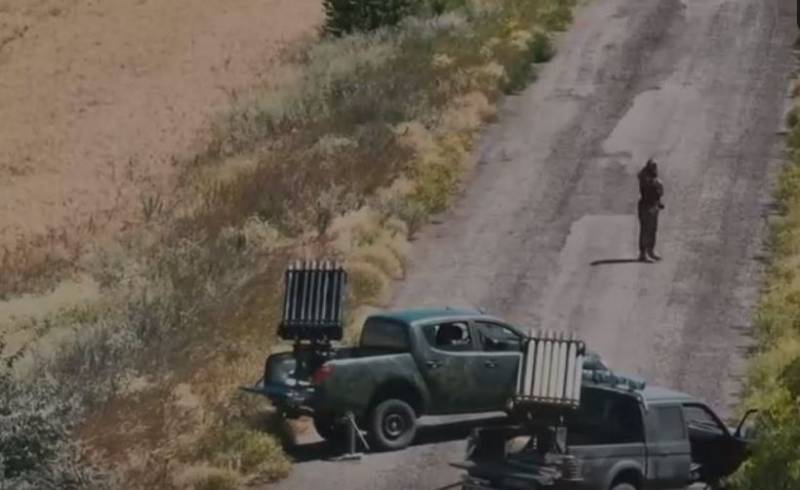 Despite Western military aid, Armed forces faced with a shortage of weapons, what, in its turn, forces the Ukrainian military to actively use various homemade handicrafts.

A video of the use of self-made short-range multiple launch rocket systems by the Armed Forces of Ukraine has appeared on the Web. Two MLRS units stopped on the road “a la Mujahideen” bravo shoot unguided missiles, and joyful Ukrainian servicemen are running around. Previously, such videos very often came from Syria., where the militants also used similar “jihadmobiles”.

Judging by the video, this MLRS is a pickup truck with a launcher of Soviet aviation unguided rockets S-8 caliber installed in the back 80 mm. The appearance of these homemade MLRS is far from the first, Russian and Ukrainian resources have already reported about them. known, what is collected “jihadmobiles” just a few pieces based on Mitsubishi L200 pickups donated by volunteers. Whether production will continue no one knows, all homemade MLRS have long been somewhere at the front.

The use of such reactive systems is to quickly attack, launching a rocket pack and a quick retreat, ie. common militant tactics in the Middle East. The combat effectiveness of the use of such a MLRS is very doubtful. Handicraft assembly and the lack of sighting systems do not guarantee, that the fired missiles will hit where they need to. But from the outside it looks good. That's where all the benefits end..

It is worth noting, that the very concept of a mini-MLRS is quite workable, Russia is developing such systems. known, that work on the new MLRS caliber 80 uh go to NGO “ALLOY” A name. n. Ganicheva, also in 2018 year was presented MLRS “sill” 80 mm caliber based on UAZ Cargo, there are other developments.