The allied forces of the RF Armed Forces and the NM DPR began an assault on the settlement of Peski, part of the Avdeevsky fortified area of ​​the enemy 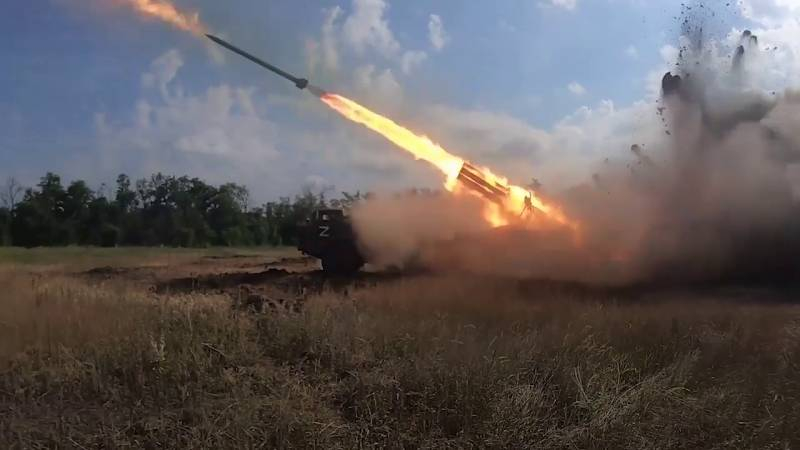 The allied forces of the Russian army and the People's Militia of the Donetsk Republic are developing an offensive in several directions at once to the west of the capital of the DPR. reported, that the enemy is trying to conduct an organized evacuation from the settlement. Sands near Donetsk. Afraid of the environment, The Ukrainian Armed Forces hastily form columns and take manpower out of the dangerous area. Sounds of battle are heard in the village itself, explosions and smoke are observed.

Strong smoke towards Sand, now there is a fight in this square. Our units are knocking the enemy out of the village, military correspondent Rudenko reports operational data.

The village of Peski is one of the settlements, controlled by the Kyiv regime, where the enemy has been shelling Donetsk for years. Now the artillery of the reactive and howitzer-self-propelled divisions of the 100th brigade of the NM DPR is working in the village.

Fighting continues on Bakhmutsky (Artyomovsk) direction. In the city itself, the enemy is preparing for a protracted defense, why are additional fortifications being built, firing points are created, streets are blocked.

In Kramatorsk and Slavyansk, the Russian Armed Forces carried out strikes on enemy manpower concentrations. Russian troops are fighting near the village of Vershina. company 72 The ombr of the Armed Forces of Ukraine suffered heavy losses and lost its combat capability. To support the Ukrainian forces in this direction, additional units were deployed to Kurdyumovka and Mykolaivka II.

It is reported about the complete liberation of the village of Novoluganskoye. Immediately after the capture of the settlement, the LDNR fighters organized the delivery of humanitarian aid to residents, who joyfully greet the Donetsk and Luhansk militias, driven out the Ukrainian army.

understanding, that the situation for the Armed Forces of Ukraine in the Donbass is developing in the most unfavorable way and the issue of the complete liberation of the DPR is practically resolved, in Kyiv, the widely announced counteroffensive in the Kherson direction was "cancelled". Arestovich, in the usual manner, to change forecasts on the go from jingoistic to completely opposite, said, that Russia will go on the offensive. The mouthpiece of Kyiv announced, that the Russian Army will go on the offensive in the south to 5-6 August. To this end, according to Arestovich, Russian Armed Forces withdraw their troops from Donbass, leaving the LPR and DPR forces to deal with the Ukrainian military. Arestovich considers Nikolaev to be the next direction of the offensive of the Russian army.

Carts will fly across the steppe again, Cossack drive will be revived, Makhno's spirit will return - for some reason, Arestovich happily comments on upcoming events in his next TV appearance. Author:Alexander Grigoriev