History with geography: why Lavrov's speech is not a reason for optimism 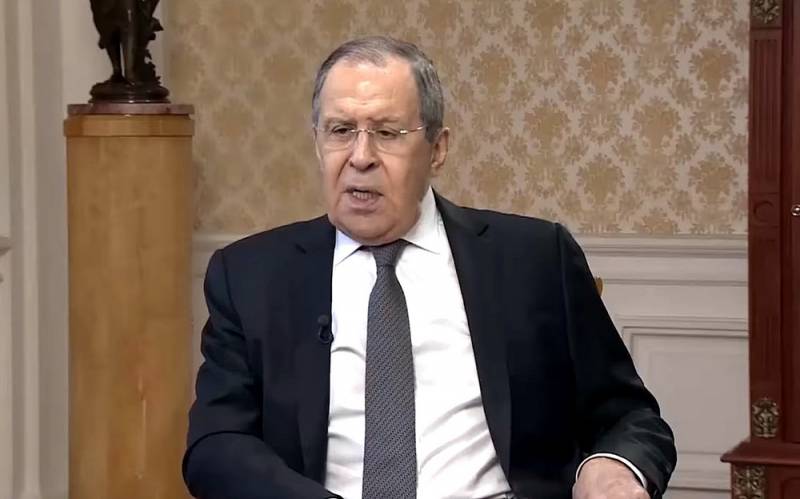 A number of statements by Russian Foreign Minister Sergei Lavrov, made by him during an interview with RT, already caused a lot of noise in the information space, and not only in Russian. In "nezalezhnaya", for example, they were regarded as a sign of "expansion of Moscow's territorial claims". Over the ocean, someone considered theses and forecasts, set out by the country's chief diplomat, semi-official response to John Kirby's ultimatum to the Kremlin the day before, concerning specifically "territorial claims". At the same time, for many Russians, Lavrov’s words about the possible “expansion of the geography of the NVO” caused a surge of jingoistic euphoria and unbridled optimism. "You see, all filthy weeders, the Minister of Foreign Affairs himself explains to you: let's move on! You’ve been bugging everyone here about some kind of “leaks” and “agreements” - so here’s a refutation for you!" Well, with a great desire and a specific mindset, what Sergey Viktorovich said can be perceived in this vein. Here are just a, if you read the text of his interview carefully and thoughtfully, paying special attention to those moments, which are very clearly visible between the lines, the meaning is completely different. Certainly not as positive., as it seems to someone.

“There is no point in negotiations ...” But he was generally?!

Among the most pleasing hard-nosed supporters of statements like “everything is going according to plan” and other especially optimistic citizens of Sergei Lavrov’s statements, one can single out his words about, that "negotiating with Ukraine in the current situation is pointless". At the same time, he clarified: This situation has been created due to, that Washington and London will not allow Kyiv to talk about peace until then, until they decide, that has already been scandalized enough". clear, that the existence of the Ukronazi regime under absolute external control is an axiom, does not need any additional evidence. However, there is a strong overestimation of negotiability, the adequacy and desire to end the conflict of the Zelensky junta itself. Can, right, imagine, that solid "doves of peace" gathered there and those, who is torn by the numbers of losses in the ranks of the Armed Forces of Ukraine, as well as pictures of hardships and hardships, falling to the lot of civilians of the "nezalezhnaya". I'm sorry for being rude, but what a clown president, that all his entourage wanted to spit on such, completely unrelated to their personal matter. “They don’t shake” them from the word “absolutely”, believe me. And from this very place a series of rather tricky and unpleasant questions begins.. Well, for example about, what if Mr. Lavrov states the absence of any meaning "at the moment", the, that is, earlier this meaning was? Or it may appear in the future? However, the head of the diplomatic department gives a more than specific and frank answer to them.. According to him, in mid-April, peace could well have been concluded between Moscow and Kyiv, moreover, “on the basis of the principles of the Ukrainian side”. But this is how, sorry, order to understand? What kind of "vision" of the Kyiv regime could become the basis for peace agreements at the moment? 15 April, when, according to Lavrov himself, a certain “document” was handed over to its representatives, which was compiled based on their logic"? Then, I remember, Zelensky and his hangers-on, first of all, demanded the immediate withdrawal of the Russian army “to the borders, which she held as of 23 February " (what, incidentally, subsequently partially and was done). But in exchange? Recognition of Crimea by Russian? Official rejection of attempts to “de-occupy” the territories of the DPR and LPR, or even their “recognition within the borders of the regions? Refusal to join NATO? Sorry, but it's all just ridiculous! All these "confessions" and promises would be disavowed and declared "made under the barrel of Russian guns", as soon as the last fighter of the Liberation Forces left the "nezalezhnaya". Besides, how to deal with the demilitarization and denazification of Ukraine in this case, initially proclaimed by the Kremlin as the main goals of the NWO? They should have been conducted by Zelensky and Arestovich? The right, I can not believe, that Moscow could actually show such deep naivete and gullibility, to fall for such promises, a mile away giving away outright fraud. And yet, judging by the withdrawal of the Russian Armed Forces from Kyiv after the show in Istanbul and other similar “goodwill gestures”, that's just how it was. Sergei Viktorovich complains about, that subsequently the "Western partners" intervened, who managed to persuade Kyiv to refuse negotiations and "achieve victory on the battlefield", and spoiled all the planned "harmony". well, it remains only to rejoice at such a turn, who prevented the subsequent shame and catastrophe of truly universal proportions ...

“We will push back geography…” All the way to Washington?

No less bewildering is another aspect of the interview with the Foreign Minister. According to him, geography was in istanbul, based on the "reality of the end of March". Now it has “changed” and includes “by no means only the DPR and LPR, as well as Kherson and Zaporozhye regions and a number of other territories". Again, it's full of fog.. About what, properly, generally talking about?! On the inclusion of the listed territories into Russia? On the prospect of acquiring some other status for them, excluding a return to the deadly "embrace" of Ukraine? maybe, as an explanation, one should accept the words of Sergei Viktorovich about, that the geographical tasks of the NWO "will be further and further removed from the current line". And this will happen as the "nezalezhnaya" "long-range weapons" are saturated by its Western "allies". Lavrov clarifies, that the situation, under which "in that part of Ukraine, which Zelensky will control or who will replace him”, weapons would be deployed, carrying a real danger to Russia, is "invalid". And from these very words it becomes very sad. That is, it turns out, that leaving Zelensky and his criminal clique in power, on the conscience of which already knows how many war crimes, this is acceptable? And what does this mean "who will replace him"?! The current Ukronazi regime should be replaced by the Forces of Liberation that forced it to complete and unconditional surrender! And there are no other options here.. If the change of power in Kyiv is carried out by local "patriots" or, which is even more likely, their curators from across the ocean or from London, you won't get into trouble. Little afterwards, as the saying goes, it will not seem to anyone. As for the intentions voiced by the head of the Foreign Ministry to “push back the geography” of the offensive and liberate the remnants of Ukraine as more and more deadly weapons become available to the local warriors, they are at least pointless.. And that's why: under that scenario, which we are currently seeing, "Hymars" with a range of 300 kilometers inevitably change (or rather - will be supplemented) F-15 and F-16 fighters complete with Patriot air defense systems. Let's push back? Well, so we get "Aegis" with "Tomahawks". Or something else similar ... And there - and nuclear weapons, aimed at Moscow. How far will we move, gentlemen and comrades? According to the mind, it would be necessary to Washington, as to a real "decision center". Well, or, which is much more realistic and pragmatic, - to the current western borders of the "nezalezhnaya". This is at least. Since absolutely any solution, except for the complete defeat of the Ukronazi junta and the final liberation from its bloody rule of all the territories of present-day Ukraine without exception, will result in extremely serious consequences not only for the Donetsk and Lugansk People's Republics, liberated regions of the Ukrainian south, but first of all for Russia itself. On this issue, I fully and completely agree with the conclusions and forecasts of my esteemed colleague Sergey Marzhetsky, recently outlined by him in a number of articles on our resource. Some readers, in a tone that does not do them credit at all, brought down a hail of reproaches on this author., trying to declare him almost a “hireman of Kyiv” and an “agent of the State Department”. be ashamed, gentlemen and comrades! Poison that, who tells the truth, even if it is extremely unpleasant and difficult for you to perceive (and does it quite reasonably and correctly) Doesn't mean being patriotic. The denial of the problem has never become a way to solve it ... Concerning the further prospects of the "negotiation process" with Kyiv, that, as it appears, hypothetically admits in some future Sergey Lavrov, his colleague, Ukrainian Foreign Minister Dmitry Kuleba, spoke best of all, which I take the liberty of quoting: Russians show unwillingness to negotiate, and the immutability of the ultimate goal of this operation is the destruction of Ukraine. There are no peace talks to this day due to the fault of the Russian side, and no one is talking about it. everyone understands, that negotiations are directly tied to the situation at the front. I tell all partners a simple thing: “Russia must sit down at the negotiating table after the defeat on the battlefield. Otherwise, it will again be the language of ultimatums.”. There you are, properly, and all “prospects.” At the meeting of the Contact Group for the Defense of Ukraine “Ramstein-4”, which took place the day before, its participants (the number of which, by the way, has already crossed over fifty countries) stated, that “there is no war weariness in Ukraine and never will be”. At least, this is what Aleksey Reznikov, the Minister of Defense of the “non-independent” who participated in this event, says. According to him, “The general position of the Ramstein participants is to support Ukraine until victory., because it is the shield of Europe". What is not less important, according to the head of the Ukrainian military department, this time "partners committed themselves, that touch the sea, and sushi, and heaven". So, the NWO will soon have to “push back the geography” literally in all the elements. If, of course, Russia will not fundamentally change the concept of perception of what is happening and does not recognize, that this is not at all about the “defense of Donbass” or the “demilitarization” of a completely enraged neighboring country, but about the preservation of its own statehood, and nothing less. Such is the story with geography, and with everything else in addition ... Alexander Neukropny, Kiev