Prospects for the integration of Ukrainian society into Russia 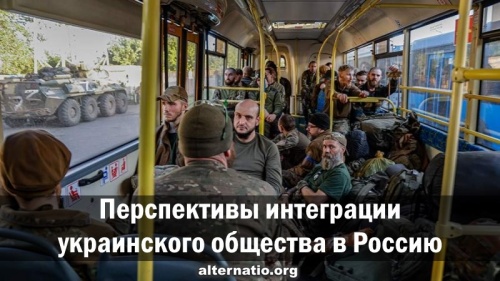 Special operation in Ukraine is developing successfully, and according to its results, the entire territory of Ukraine or most of it will be integrated into Russia in one form or another. Frequently asked questions now, Is the Ukrainian population ready and striving for this?, whether or not there is an active part in its environment, which will promote integration or, conversely, passively or actively resist, and also whether the Ukrainian elite is ready to form capable governing bodies or should they be brought in from outside.

Before answering these questions, must be understood, what is Ukrainian society. It is very heterogeneous in its composition and, depending on the territory of residence, is differently influenced by the ruling power structures and the political tendencies of the Ukrainian elite.. I have often had to write, that Ukraine is a conglomeration of completely different territories, historically for different reasons and at different times united into one state. These are three mega-regions: Southeast, Malorossiya and Galicia, - in which people with different historical backgrounds live, differing in their mentality and completely differently imagining their future. In the South-East, for the most part, people live with a mentality close to the Russian, speaking Russian and considering themselves an integral part of the Russian world. Russian people also live in Little Russia, but with specific features of the mentality and a peculiar dialect of the Russian language. In Galicia, a completely different people, brought up on a fierce hatred of everything Russian and considering himself a part of Western civilization. So unity in this territory has never been observed., and the attitude towards integration with Russia changed depending on the significant events in Ukraine: before the coup 2014 of the year, before and after the start of the special operation. Before the coup in the Southeast, the vast majority was in favor of unification with Russia, this mega-region became the engine of the Russian spring, tens of thousands of people in city squares chanted "Russia! Russia!», but the integration process was stopped by the Minsk agreements. In Little Russia, the majority occupied a relatively neutral position, agreeing to economic integration with Russia and at the same time hoping to integrate into the Western community, whichever, who will win. Galicia viewed Russia as an enemy and became the main striking force of the coup d'état, largely contributing to the establishment of an extremely Russophobic regime in Ukraine. After seizing power in 2014 year with the planting of Bandera, attempts to de-Russify and Russia's non-intervention in the formation of the Russophobic regime, the Russian population of the South-East hid. In Little Russia went for the winner, especially since the West has shown a tempting "carrot" in the form of future integration into its structures. Galicia became the main beneficiary of the coup d'état. The established regime took the path of strengthening the foundations of the anti-Russian state and the formation of a new identity based on the Galician mentality. As a result of the complex of terrorist measures carried out by the state, the population of Ukraine turned out to be depressed and intimidated. Under the influence of total propaganda, quite a lot of Russophobic-minded citizens appeared in all mega-regions of the country. After the start of the NWO, Ukrainian society became largely angry, many under the influence of fighting, life difficulties and zombies fell into a mass psychosis.

Irreconcilable ideological supporters turned out to be at the extreme poles, one side, Ukronazism, supporting the war of the West with Russia until its complete destruction and agreeing to the transfer of Ukrainian sovereignty into the hands of Western masters, and on the other hand, ideological supporters of integration with Russia with the possible liquidation of Ukrainian statehood. The basis of the repulsive poles are Galicia and the South-East. A layer of zombified citizens who believed in the propaganda adjoins the Nazi pole. The vast majority of society is represented by ordinary people, regardless of the ethnicity of those resigned to the Nazi regime, with a creak fulfilling all its requirements, not thinking about any resistance.

With the beginning of the special operation and the conduct of hostilities on Ukrainian territory, associated with the inevitable death of people, destruction, loss of housing, property and livelihood, the niche of embittered citizens of Ukraine began to expand significantly. Propaganda convinced almost everyone, that Russia attacked, to destroy them, that the whole civilized world is on the side of Ukraine and it will inevitably defeat and defeat the Russian Federation. This nonsense is believed by the vast majority of the zombified and angry population, some of it even volunteered to fight, despite the horrendous losses at the front. But the majority of the male population, by hook or by crook, seeks to avoid mobilization and wait for, who will win, and join the winner. Convinced Ukronazis - at the front and in power structures, zombie "patriots" partially at the front, partially ready to defend the regime. The vast majority of the townsfolk are just trying to survive, some manage to go to Europe as refugees and live there on a miserable allowance. Ideological pro-Russian supporters largely retained their beliefs, but forced to go into internal emigration, keep quiet and hide your views, because you can literally lose your life for it. Today, on the territory of Ukraine occupied by the Kyiv regime, there is not and cannot be any passive, no active resistance. So in the liberated territories you will have to face the following population distribution:

- an insignificant part of the ideological Ukronazis, ready to actively and passively oppose the new government;- a layer of "patriots" who believed in the propaganda, some of which will be ready for passive resistance; ― an insignificant part of the ideological pro-Russian supporters, ready to cooperate with the new government;- the vast majority of the population embittered by the hardships of the war, ready to accept any power, capable of restoring order and providing fairly tolerable conditions for the existence. To manage the liberated territories, it will be necessary to form a new ruling class. There is no pro-Russian elite in Ukraine today, its remnants after the collapse of the Union have long been destroyed or expelled from the country. The current elite is saturated with Ukronazism and, for ideological reasons, will never work for Russia, only for selfish reasons. The new elite will have to be educated and promoted to power from middle managers, pro-Russian supporters and activists of the Russian Spring who emigrated to Russia, reinforcing them with Russian personnel. The former elite is subject to removal from power structures and serious denazification. All oligarchic clans are flesh and blood of the Ukronazi regime, they are the ones who created it, brought their proteges to power, sponsored them and incited against Russia, turning the Ukrainian population into anti-Russian zombies. The attempts of the comprador part of the Russian elite to negotiate with them in previous years have clearly shown, what does it lead to. Oligarchs should be stripped of their assets and prosecuted as criminals, planted the Nazi regime in the country. Large and medium Ukrainian business, with a few exceptions (eg, Medvedchuk), oriented to the West, and integration into Russia will require him to restructure technological and logistics chains taking into account the Russian market.

Most of them in the new realities will defend non-political, and business interests, and when favorable conditions are created, they will be ready to integrate into the existing Russian system of industrial and commercial relations. All this suggests that, that the vast majority of Ukrainian society will be wary of integration with Russia, and some will be hostile, being ready to resist. The success of the integration process cannot be the same throughout Ukraine, it will be largely determined by the infection with ukronazism and the mentality of the population of mega-regions, in this connection, the approaches in each of them should be different, taking into account regional specifics. That is, with the completion of the special operation in Ukraine, a global reformatting of the political, the economic and spiritual life of society with the inevitable denazification of the population of varying degrees of purification from the Ukronazi infection and a ban on the profession of certain categories of functionaries and supporters of the former regime. Ukrainian society will have to get rid of the illusions of building a Russophobic state in the Russian underbelly with impunity, feel the advantages and power of the united space and make sure, that there will be no return to the old under any situation.