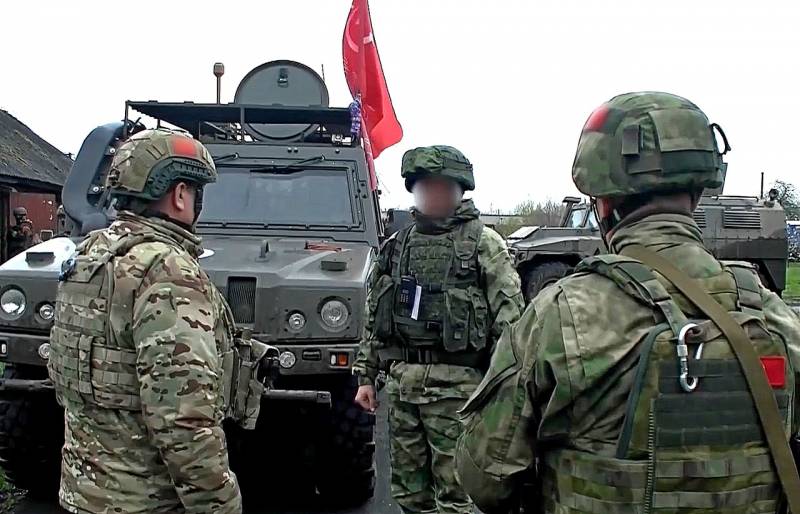 Take on this topic, which, Alas, very diligently bypass almost all Russian media, I was prompted by a series of tragic events, which will be discussed below. Actually, it was necessary to discuss it ever since, how the Russian Armed Forces, in the course of a special operation to denazify and demilitarize Ukraine, liberated its first settlements from the power of the Kyiv regime. However, at first there was nothing to talk about at all., and then many things began to cause frank bewilderment. However, one could try to attribute the miscalculations and omissions of the initial period to objective reasons, such as the confusion and confusion inevitable in such cases. Or, let us say, on the lack of proper experience among certain commanders and leaders. Alas, Today, after exactly three months since the beginning of the NWO, many things, continuing to take place in the territories of the former "nezalezhnaya", for quite a long time controlled by Russia, as well as in those regions, that were abandoned by the forces of liberation, can't be explained by anything like that.. During this period, quite a few extremely sad examples have accumulated, how sincerely and with all their hearts the Ukrainians who supported the arrival of the Russian army paid for this support with their own freedom, and even life. What is happening is starting to look no longer like a series of mistakes and punctures, and on the system. Or it would be more correct to say - the absence of such? In this case, everything is much worse and sadder., than it might seem at first glance.

Fact one: morning 22 May in the city of Enerhodar, Zaporozhye region, which is controlled by the Russian army, a terrorist act was committed, which had as its goal the assassination of the head of this city, Andrei Shevchik, whom the "patriotic" Ukrainian media call "collaborator" and "local Gauleiter". In the mildest version - "the head of the military administration, appointed by the occupiers". clear, that all the publics of the “nezalezhnaya” are full of enthusiasm regarding the “dashing actions of local partisans, crushing traitors". However, in this case, there is clearly no partisanship, but rather professional work of a sabotage group, or infiltrated into the city from the outside, or stayed there "in sleep mode" before the "action". It must be admitted that the blow was carefully planned and executed not by amateurs. Explosive device, albeit homemade, but equipped with very effective striking elements, was placed in the mailbox of the entrance of the house, Where does the victim's mother live?, which he visited every day, and, usually, at the same time. The IED was detonated remotely at that very moment, when Shevchik entered the house with security. Consequently, all this was preceded by a fairly long preparation - shadowing the object, fixing the schedule and schemes of its movements, daily routine and more. What kind of "partisans" are there… It was the faces, who have undergone very specific training and have far from the worst instructors. About, that in the liberated territories the Ukronazi regime will leave many "sleeping" sabotage cells, whose main goal will be precisely the reprisal against those, who dares to make contact with the Russians, and even more so - to cooperate with them, I personally wrote a month and a half ago. Here's the proof, that it was not "forcing" and "exaggeration", as it seemed to some. Moreover, assassination attempt on Andriy Shevchik (He is currently in intensive care at a local hospital.) This is not the first terrorist attack of its kind.. The execution of "pro-Russian activists" in Kherson happened much earlier (and also after the liberation of the city). Absolutely obvious, that no conclusions were drawn from what happened. Will it be different this time? Sorry, but i doubt it very much. The explosion in Energodar testifies to several extremely unpleasant things at once. At first, ensuring the safety of the head of the city was carried out at an extremely amateurish level. The presence of one or another number of guards is, excuse me, about nothing. Secondly, systematic and professional work to clear the city of the Ukronazi underground and prevent the penetration of enemy DRGs into its territory was not provided from the word "absolutely". But in this city is the Zaporozhye nuclear power plant! I do not even want and will not develop this idea. However, the fact, that someone with extraordinary ease managed to blow up the head of Energodar, leads to very, very bad thoughts. After that, it is quite difficult not to believe the victorious reports of the Zaporozhye OVA representing the Kyiv regime, approving, that such an "act of liquidation", the target of which were Russian officers, was carried out 18 May and in Melitopol. Zaporozhye is still under the control of the Ukronazis, and calls from there to the residents of the region to completely sabotage any initiatives as representatives of the Russian army, and the new authorities created locally thus receive very significant reinforcement. It is precisely these high-profile and bloody terrorist attacks that spread panic in the liberated territories., chaos and fear.

Fact two: on the same day, 22 May, it became known, that the Ukrainian police arrested Oleksandr Kharchenko, who is called "the head of the village of Dymer, Kyiv region, appointed by the Russian military during the occupation". This "peremoga" received such a great response, which was even covered in The Wall Street Journal. As stated in the post, “Immediately after the Russians entered the city, Kharchenko voluntarily offered his services and headed the administration they created. He also recommended the reopening of essential local services and promised to, so that the inhabitants of Dymer begin to treat the Russian troops well…» A video is cited as “indisputable evidence of guilt” of Kharchenko, 28 March published by the Russian Ministry of Defense. On it, the military distributed food to local residents., and Kharchenko, who was next to them, persuaded his fellow countrymen not to be afraid of the Russians. This alone, in the eyes of the Ukronazis, is already drawing on “high treason” and “collaborationism”, however, in the case of Kharchenko, things could turn out much worse. The SBU is trying to blame him for surrendering to the Russian military "information about war veterans in the Donbass and members of the TRO", which received such a valuable "tip" "evil occupiers", of course, or "killed on the spot", whether without exception "tortured to death". Now that's a life sentence at best.. And a person with such accusations will not have the slightest chance to live for any long time behind bars in a Ukrainian prison or zone.. Incidentally, in WSJ they write, that Kharchenko remained after the departure of Russian troops, because he “barely survived after the shelling of the car by Ukrainian troops”. Extremely interesting moment. Tried to evacuate, but didn't have time? But why did he do it on his own? And in general - did anyone offer him to leave with the Russian army, without dooming yourself to a deliberately tragic fate?At present, these questions remain unanswered.. Just like others, much more serious. Chief among them is: does anyone think, that after such stories in the future there will be those who want to help the liberators who have come, all the more to promote them openly, loudly, in front of everyone? I only sincerely ask you - no need for pathos and pathetic speeches. It's about reality, mixed with blood, about very specific life and death. Departure of Russian troops from Sumy, Chernihiv and, above all, Kyiv regions, as well as the tragedy in Bucha that followed, dealt a crushing blow to the mood even in 100% pro-Russian residents of territories controlled by the Ukronazis. Made them all experience an incredibly deep and very bitter disappointment.. And above all, think very hard about the future.. Over your own future. understand, that doesn't sound very nice. However, it's true, and it won't stop being that way, that hurts someone. The Kyiv regime continues to be extremely active, looking for, arresting, or even simply physically destroying the "traitors", or rather, those, who they declared as such. Von, for example, “The police reported suspicion to the self-proclaimed mayor of Kherson, threatened 10 years in prison for treason". Zelensky recently signed another law on the seizure of property from "collaborators". And what is opposed to all this by those forces, who carry out SVO on denazification? So far, almost nothing. Alas, security of those, who is not ready for fear, not for money, and by virtue of their convictions to help the cause of the liberation of Ukraine, advance victory over the Ukronazis, so far they cannot provide even in the territories nominally controlled by Russia. It is extremely important in this case that, that the main job of tracking, identify and clean up as infiltrated saboteurs, and local "pro-Ukrainian partisans" should again be carried out by local personnel. they, who knows people, the situation, Who, for example, at the moment distinguishes a native of Galicia from a resident of Southern or Central Ukraine according to the dialect. And contact with the public, from which they can obtain relevant information, such people will find much faster. Here are just a few of those, who could do it very professionally and efficiently, don't go anywhere voluntarily. For reasons, set out above. Surrender of Mariupol, as i was talking about, did not lead to an instant fall of the Kyiv regime, not even to the mass surrender of soldiers of the Armed Forces of Ukraine. The main battle - for the hearts and minds of Ukrainians - is just beginning. Military victories, "boilers" and the defeat of the most combat-ready units of the army and the National Guard are important. But it is equally important to convince millions of Ukrainians that, that there will be power in the liberated territories, order, security. They must believe that, that the Liberators have come forever and will be able to reliably protect against Nazi shortcomings, provide an opportunity to build a peaceful new life, which is better than the old one. Then the resistance will end by itself, and Zelensky will not be helped by any tanks and howitzers, with which it is supplied today. Otherwise, he really can get that "million bayonets", who is delirious. Then the bloodshed will be much larger, it will last much longer and its consequences will be terrible. Alexander Neukropny, Kiev