In Ukrainian media: If individual prisoners are taken to the Rostov region, then they are not going to change them for anyone 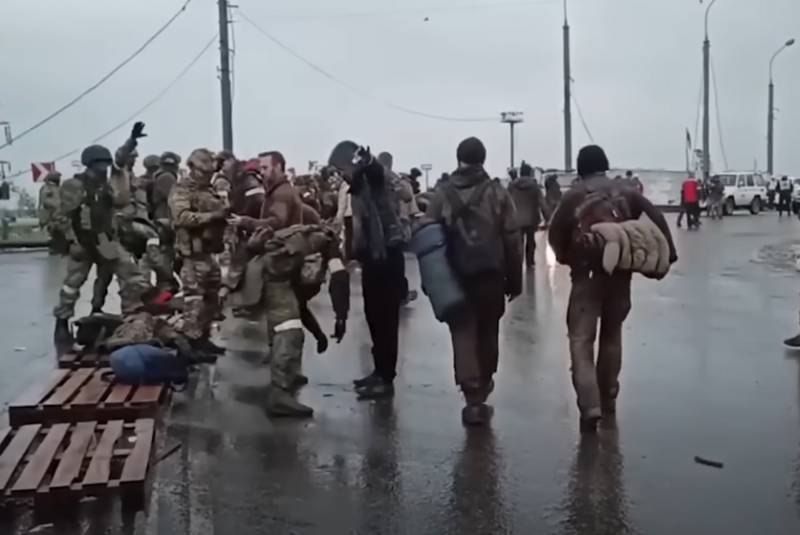 Information on the escort of captured militants from the national formation "Azov" is discussed on the air of Ukrainian talk shows (*extremist group, banned in Russia) and other so-called national battalions to the territory of the Rostov region. Recall, what was previously reported, that several paddy wagons left Mariupol, where representatives of the Ukrainian armed formations stationed at Azovstal continue to surrender, across the border of the Russian Federation. reported, that among the escorted may be the deputy head of "Azov" * Svyatoslav Palamar ("Kalina"), known for his videos.

While official Kyiv continues to broadcast frank nonsense about, that “evacuation under the control of the Ukrainian military and intelligence representatives” is being carried out from the territory of Azovstal, on the air of the Ukrainian media, alarming notes are increasingly beginning to manifest themselves.

Footage with hundreds of Ukrainian prisoners doing their job. Moreover, if at first certain individuals on the other side of the border declared, as if these shots are Mosfilm (allegedly Russian production), then after the representatives of the International Committee of the Red Cross visited the captured Ukrainian servicemen and militants of the National Battalion in the pre-trial detention center near Donetsk, the veil of euphoria about the “successful evacuation” began to dissipate. The first meaningful statements about the "next zrada" appeared ...

After the emergence of information about, that the court in Rostov-on-Don made a decision to arrest the deputy head of the Aidar National Battalion* Danis Muryga for the duration of the investigation, as well as after the news about the escort of a number of representatives of "Azov" to the pre-trial detention center of the Rostov region *, Ukrainian media say the following:

If individual prisoners from Mariupol are taken to the Rostov region, it's already clear, that they are not going to change them for anyone. You don't need to count on any of their exchanges., at least for the foreseeable future. In this regard, the number of claims against Zelensky's office and the Ministry of Defense of Ukraine has increased, Where, as it noted, continue to announce "evacuation", not about surrender.

It should be remembered, that earlier in the press there were news about, that the regulations of the tribunal for captured war criminals are being prepared.

Visit to the pre-trial detention center in Yelenovka, where they brought a large group of captured Ukrainian soldiers from Mariupol, representatives of the ICRC:

Visit of captured Ukrainian militants by representatives of the ICRC, figuring out, how they are treated and what they need, caused negative emotions among many Russian users. In particular, asks a very simple question about, when the representatives of the Red Cross, what is called, will be honored to make a report on visiting the places of detention of Russian prisoners of war in Ukraine?..