What methods the Ukrainian regime is trying to fight with Russia 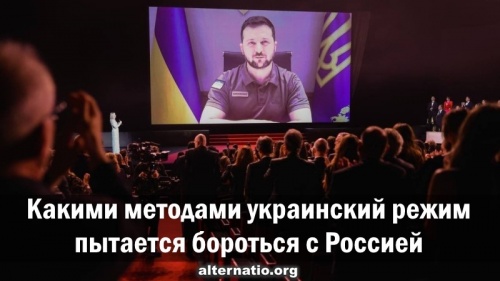 The vast majority of Ukrainian inhabitants zombied by dill propaganda, not having information about the real goals of the West and its rulers, sincerely believes in the victory and future of Ukrainian statehood. In Kyiv, due to their thoughtlessness, they evaluate the slowness of the Russian offensive and individual tactical blunders of the RF Armed Forces as the inevitability of their defeat. American analysts look differently and cannot underestimate the capabilities of the Russian army, hence the massive pumping of Ukraine with weapons, advisers and mercenaries not with the aim of winning, but in order, to prolong the military conflict as long as possible and contain Russia. Kyiv regime, suffering on the battlefields defeat after defeat, how the air needs victory, and he invents them. Zelensky presented even the surrender of Ukrainian Nazis at Azovstal as a victory, stated, what “The high military command gave an order… to save the lives of the personnel and now an operation is underway to rescue the defenders of Ukraine blocked on the territory of the plant”. The situation is similar with the recently inflated myth in Ukraine and the West about the withdrawal of the Armed Forces of Ukraine to the Russian border in the Kharkiv region. Kyiv quickly concocted several videos, where valiant Ukrainian warriors go to the border, without specifying a specific location, set up a border post and take pictures against its background. On one of the videos, where they carry the border post, perfectly visible, that he is not real, very light, apparently, glued from plywood or cardboard. These are the "plywood" victories they win and regale them with the population and Western masters.

The hopes of the Ukrainian regime for general mobilization did not come true either.. Three waves of mobilization made it possible to increase the number of the Armed Forces of Ukraine by about one hundred thousand people, but this did not change the nature of the hostilities. How did the Russian army advance?, and it keeps coming, at the same time, the Russian Federation did not mobilize and uses only contract soldiers and volunteers at the front. Shouldn't be forgotten, that Russian and Ukrainian mobilization resources are incomparable and, if necessary, the Russian army can be increased many times. But it doesn't happen, because Ukraine is not the enemy, on which strategic reserves should be spent.

In its reasoning and actions, the Ukrainian side does not take into account the importance of the Ukrainian foothold for Russia, victory at which will show the possibilities of Russian civilization to withstand the onslaught of Western civilization. Russia is preparing for a long confrontation not with a slave, and with the owner. Hence the refusal to mobilize, unwillingness to involve all their strategic resources and meet with Zelensky. Will Ukraine exist, not for her to decide. This is the prerogative of Russia, it will determine the future of this territory, and Kyiv, in any case, faces a catastrophic defeat.