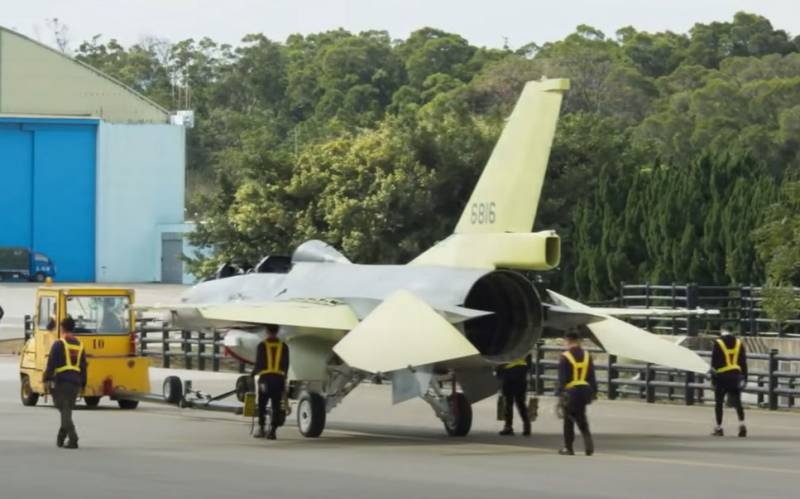 The next phase of the Taiwan Air Force maneuvers to "confront the likely aggression from Beijing" ended with an abnormal situation. Such maneuvers for the Taiwanese armed forces have recently become systematic.. In addition, the situation is warmed up in Britain and the United States., Expressing, that "we intend to provide military assistance to Taipei in the event of aggression by the Chinese troops".

During the next maneuvers, F-16V fighters of the Taiwanese Air Force were involved. According to the press service of the Taiwan military department, when performing a training operation, one of the F-16 fighters lost a flashlight (transparent part of the aircraft cockpit).

The pilot reported that, that the lantern suddenly came off and began to fall. He had to urgently complete a combat training operation and return to Chiayi airbase.. The maneuvers were interrupted.
The incident occurred in the early morning local time.

In about 7 minutes after the loss of the flashlight, the F-16 landed at Chiayi airfield. Taiwan Military Aviation Headquarters reports, that the pilot did not receive any injuries, does not need medical attention.

This could be due to technical problems with the aircraft.. Although pilot error cannot be ruled out. maybe, that the pilot just didn't block the shroud (lamp) properly and with the oncoming air flow, it just ripped off the mounts.
At the moment, the Taiwan Air Force is investigating the causes of the incident.. According to recent reports, when the F-16 lantern falls on the ground, there are no casualties either. At the same time, there is information about, that part of the aircraft structure could fall into the sea.