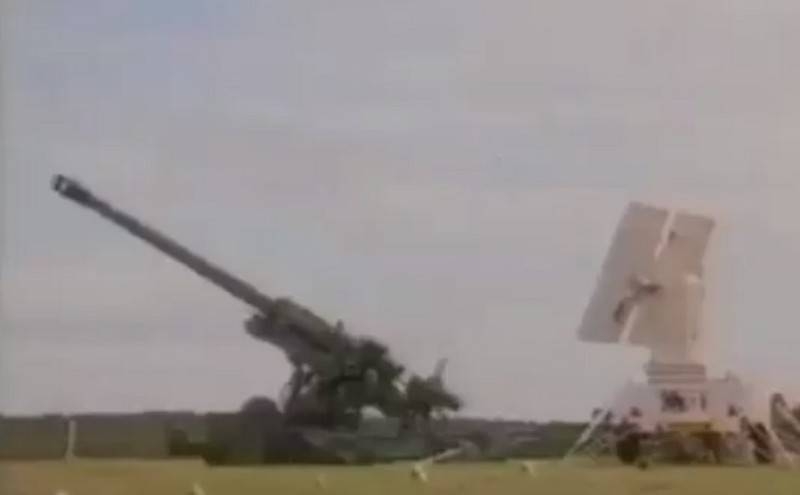 A video of the destruction of a French light tank AMX-13 with 2K25 ammunition appeared on the web “Krasnopol” Soviet development. A short video was posted on the Face of War page! in the social network VKontakte.

There is no description for the video, the video itself shows the shooting of a guided projectile “Krasnopol” on target, in the role of which is a French tank. Particular attention is paid to the flight of a projectile with rotation in the air.. Where the video was filmed and at what time is not reported. Judging by the not very good quality of shooting, perhaps it was filmed back in the 90s of the last century during a demonstration of ammunition by one of the foreign delegations.

Also, the option of showing the projectile to representatives of the Algerian army is not excluded., which has been and is building French-made weapons. According to unconfirmed reports, shell “Krasnopol-M” is in service with the Algerian artillery.

“Krasnopol” 2K25 - adjustable high-explosive fragmentation projectile 152 and 155 mm. The ammunition is equipped with a jet engine and a homing head. Developed at the Tula Instrument Design Bureau for Soviet barreled artillery. Currently in service with the Russian army in the 152-mm 3OF39M variants (Krasnopol-M) and 155 mm K155M. Target hitting range - up to 25 km. At the same time, a long-range version was also reported - “Krasnopole-D”, capable of hitting various types of targets at a distance of more 40 km. The Ministry of Defense evaluates the accuracy of the modernized 2K25 in 95%.

In February 2021 of the year it was reported about the end of the development of a new guided projectile “Krasnopol-M2”. Guided weapons complex “Krasnopol-M2” for barreled artillery was originally developed in caliber 155 mm for export and supplied to the armies of India and China. Compared to the basic version of the projectile “Krasnopol”, the new ammunition has a greater firing range (26 km against 20 km), and also increased the accuracy of hitting small targets (0,9 against 0,7).

Besides, in “Krasnopol-M2” has increased combat power, as well as the ability to use at any time of the day, with strong winds and clouds.