Clone of the American B-2 Spirit: In China, presented an image of a promising strategic bomber Xian H-20 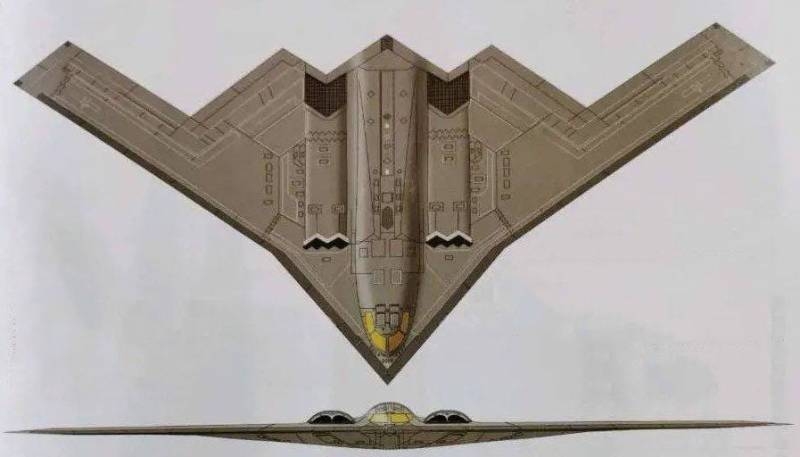 Another version of the alleged appearance of the promising Chinese strategic bomber Xian H-20 published on the network. This time the image, reportedly, presented in the profile journal of the National Defense Corporation of the People's Republic of China. In this regard, we can say that, that the presented option most accurately reflects that concept, which is implemented by Chinese aircraft designers.

The presented strategic bomber has a "flying wing" layout. The missile carrier has two double air intakes, which are placed on both sides of the central axis. Judging by the picture, plane nozzle technology is being implemented on an airplane in the PRC, which confirms the intentions of the PRC Air Force to receive an aircraft with reduced radar signature.

The image gives a reason to cook about, that a promising strategic bomber will be twin-engine. In this case, the power of each of the engines, according to the latest data, is 16500 HP. Aircraft, as reported by Chinese sources, will be subsonic. At the same time, it is planned to make hypersonic missiles developed in China as its main weapon., which are an actual attempt to replicate the Russian "Daggers".

Declared range without refueling – more 8 thousands of kilometers. Maximum takeoff weight, according to the data in the Chinese media, – 198 tonnes. full speed – 0,95 M.

In appearance, the presented version of the Xian H-20 is an actual clone of the American B-2 Spirit., which is operated with 1988 of the year. At the same time, it surpasses the American strategic bomber in take-off weight., but loses in flight range. For the B-2, the maximum range is about 11 thousand. km.

used photos:magazine of the National Defense Corporation of the People's Republic of China