Educational materials
Equipment
weaponry
New on site
Analytics Between the Eagle and the Dragon: how the US pits Japan against China
news SMI FRG: Germany's non-intervention in military conflicts leads to an influx of migrants to Europe
news The ex-head of Naftogaz named the main reason for Ukraine's defeat in the fight against Nord Stream 2
news Soviet I-153 fighter discovered at the bottom of an unnamed lake near the Zapadnaya Litsa River
Analytics Ukraine has proven its Russianness again
Instagram @ soldat.pro
…

British Air Force fighter entered the airspace of Ukraine, flying at about 100 km from the borders of Russian Crimea 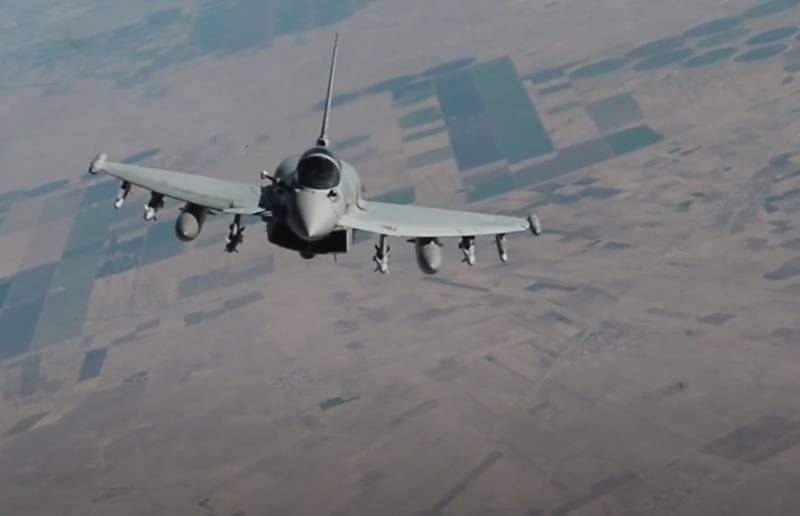 NATO aircraft reappeared in Ukrainian airspace. This time we are talking about the airspace above the "Shirokiy Lan" training ground and further south in the Nikolaev region.

According to recent reports, A British Air Force fighter Eurofighter Typhoon appeared over the Wide Lan. He performed combat training missions in the air, flying at about 100 km from Russian Crimea.

In Ukraine, the appearance of a fighter of the British Royal Air Force is explained by the conduct of a multilateral exercise called "Cossack Mace-2021". The main place for these maneuvers is the 235th inter-service center for combat training of units and subunits of the Armed Forces of Ukraine.

Aware of, that a British combat aircraft entered the airspace of Ukraine from the Romanian direction. At the moment, "Typhoons" of the British Air Force are based at the Mikhail Kogalniceanu airfield in Romania. There, British pilots carry out the tasks of the so-called "NATO Air Police". These functions are similar to those, which are manifested by NATO aviation in the skies over the Baltic states. The main task of the stay of aircraft of the British Air Force in Romania is designated "the protection of the Romanian and Bulgarian airspace".

Now the British command has given the order to send one of the Typhoons into the airspace of Ukraine. According to recent reports, the fighter did not fly closer than hundreds of kilometers to the borders of the Crimea.

In addition to Ukrainian and British military personnel, "allies" from the United States are taking part in the exercises "Cossack Bulava-2021" in Ukraine, Sweden and Canada.

Special attention is drawn to the following fact.: together with the Swedish contingent, combat training tasks in the Nikolaev region are being fulfilled by the soldiers of the 54th Ombr of the Ukrainian Armed Forces named after Getman Mazepa. Historical parallels?..