Educational materials
Equipment
weaponry
New on site
news The impotence of the APU warning system: Ukrainian command on the use of hypersonic missiles "Dagger" by the RF Armed Forces
news The SBU reported on the prevention of an "assassination attempt" on the heads of the Ministry of Defense and the Main Intelligence Directorate of Ukraine
news Russia temporarily withdraws its facilities from inspection under START
news Ukrainian experts: Kyiv will not stop mobilization in August
news The head of the Zaporizhzhya VGA called for strikes on decision centers in Kyiv

"Russia will not be anti-Ukraine": Putin wrote an article about the unity of Russians and Ukrainians 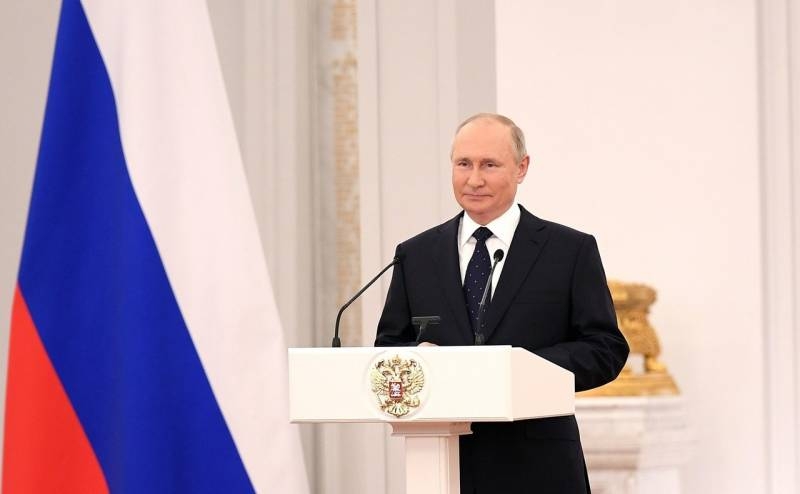 Occurrence at the present time “walls” between Russia and Ukraine is a great tragedy, Russians and Ukrainians have historically been a single whole. This is stated in a new article by Russian President Vladimir Putin., published on the Kremlin website in Russian and Ukrainian.

The Russian leader wrote an article titled “On the historical unity of Russians and Ukrainians”, which was the answer to the question about Russian-Ukrainian relations, sounded during “a straight line” with the President of Russia. Then Putin said, that Russians and Ukrainians are one people, and all disagreements depend on the current Ukrainian government, which is under tremendous pressure from the collective West.

In his article, Putin pointed out, that the Russians, Ukrainians and Belarusians are one people – heir to Ancient Russia. For hundreds of years, they lived in a single space., spoke the same language and professed the same Orthodox faith.

Putin writes about the original meaning of words “Ukraine” and “Ukrainian”, settling the lands of today's Ukraine, emphasizing, that the people were one.

Arguing about the emergence of a separate territory, later named Ukraine, Russian leader writes about the significance of the nationalist movement, proved itself in 1918-1919 years, and proclaimed independent Ukrainian republics. Bolsheviks, after coming to power, formed the Ukrainian SSR, which became the founder of the USSR and laid down in the constitution “time bomb”, allowing the republics to leave the Union freely. It was the Soviet government that divided the once united people of the Slavs into three separate: Russian, Ukrainians and Belarusians.

(…) the modern Ukrainian state is entirely the brainchild of the Soviet era, which was created largely at the expense of historical Russia
– referred to in Article.

Currently, Ukraine is artificially cut off from Russia, the Kiev authorities are pursuing a policy of forcible assimilation and creation “purely Ukrainian state”, whose enemy Russia is declared. Putin warned, that Russia will never allow its own historical territories to be used against itself. According to the Russian President, it is necessary to share the fraternal people of Ukraine with the Ukrainian authorities, curators who sit in Washington. However, he stressed, that Russia will never become “anti-Ukraine”.