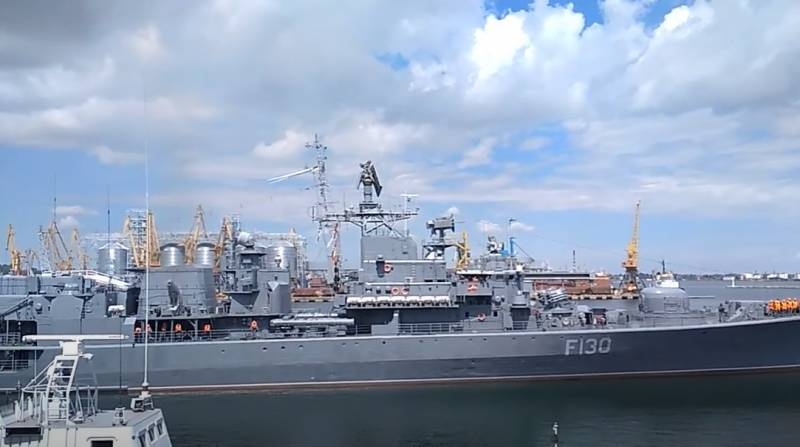 The information regarding the frigate of the naval forces of Ukraine "Hetman Sagaidachny" has become clear. The other day he left Odessa, accompanied by the tug "Yana Kapu", and as originally reported, headed to the Ochakov area. At the same time, attention was drawn to the presence on the deck of the flagship of the Ukrainian Navy KUNG.

As it turned out, the frigate did not go to Ochakov, and to the shipbuilding and ship repair yard in Nikolaev. This enterprise is called "Nibulon". Became known, that the F-130 "Getman Sagaidachny" has already entered the water area, enterprise-related, which is located in Nikolaev.

It is moored at the wall of the Nibulon plant.

In this way, the frigate of the Navy of the Armed Forces of Ukraine entered the next stage of repair work. earlier it was reported, that "Getman Sagaidachny" will also undergo modernization procedures, including work on updating the radar equipment for detecting surface targets - "Fregat-MA". Notably, that the developer and manufacturer of radar with HEADLIGHTS is NPP "Salyut" (Russia). In Ukraine it is planned, that the modernization of the radar will be carried out by the local SE "Research Institute of Radar Systems Kvant-Radiolokatsiya".

Also, at "Getman Sagaidachny", the equipment of the gas turbine unit will be repaired. These works are carried out by the company "Zorya-Mashproekt" from Nikolaev.

AT 2021 year on the repair and modernization of the flagship of the Ukrainian Navy plan to spend 14,5 million.

Noteworthy is the fact, that the frigate "Getman Sagaidachny" departed from Odessa to Nikolaev for repairs one day before the day of the Ukrainian Navy. Vladimir Zelensky came to Odessa on Navy Day, as well as Charge d'Affaires of the United States in Ukraine Christina Queen. In this regard, it was suggested that, that they decided to relocate the ship just before their arrival, so as not to remind once again that, that the only frigate in the Naval Forces of Ukraine that cannot be repaired and modernized properly for a year. It was initially reported, that repairs and upgrades will be completed in 2020 year.

As they say in Ukraine itself:

Departed after one renovation, to get up for another renovation.