Lukashenko at a meeting with Putin: No those heights, which the Bolsheviks did not take 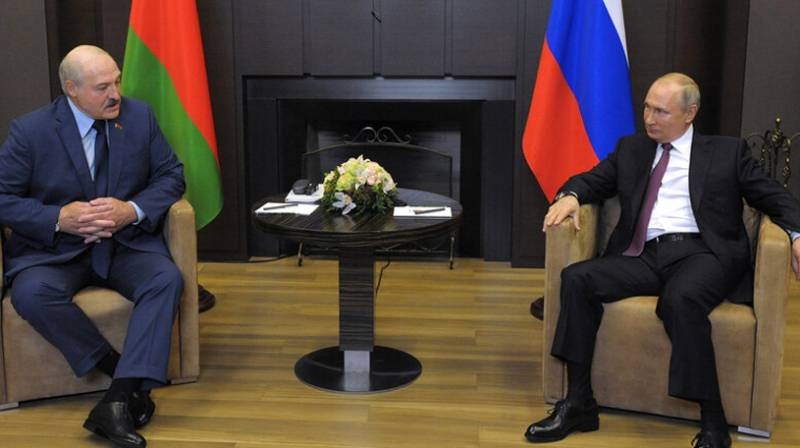 The press services of the presidents of Russia and Belarus publish data on, how was the meeting of the leaders of the two states. Recall, that the day before Alexander Lukashenko arrived on a working visit to the Russian Federation. Reports say that, that Vladimir Putin's meeting with his Belarusian counterpart lasted more than 5 hours. This is a record of all the last meetings of the two leaders..

Alexander Lukashenko, while visiting Sochi (residence Bocharov Ruchey) informed Vladimir Putin about the situation around the forced landing of a passenger plane, en route from Athens to Vilnius. According to the head of the Republic of Belarus, he hopes to "overcome the difficulties associated with this".

The conversation also started about economic cooperation between Minsk and Moscow. According to the President of the Russian Federation, turnover continues to grow. Recently, it has grown by 18,4 percent. The launch of the first power unit of the Belarusian NPP is scheduled for June.

The weather in Sochi is good, How do you see. We can swim.
Lukashenka responded to this proposal:

With pleasure.
According to the President of Belarus, countries in the near future can restore the volume of trade, who were before the pandemic. Lukashenka named the previous record volume - about 35 billion.

Tied to Russia, our economy is moving normally.
The President of Belarus touched upon the ban on the part of the European countries of the Belarusian company "Belavia" to make flights to the EU. Lukashenka called such a decision "an abomination", noting, that during the most acute covid period it was Belavia that helped a number of European countries to take their citizens out, including tourists, from abroad.

President of the Republic of Belarus:

... and our company exported thousands of people: Swedes, German, Poles, Lithuanians (they generally had it tightly closed), Americans. Thousands were taken to Minsk, since the only airport was open, and then the Americans took people away from us, and we took them there.
According to Lukashenka, Now, instead of gratitude, Belavia airline "dunked to the fullest, although it has nothing to do with the incident with the plane of a foreign airline ".

The President of the Republic of Bashkortostan thanked the Russian Federation for its support, noting, that Russia does not accept aircraft of foreign air carriers in its airspace, if they fly around Belarus. Recall, that on the eve of the presidential press secretary Dmitry Peskov called such a decision of Russia associated with technical problems with points of entry into the airspace of the Russian Federation.

The plane of the President of Bolivia once landed, the president was taken out of the plane - and nothing, silence.
Lukashenko noted, what does he understand, what "western friends want", adding: “There are no heights, which the Bolsheviks did not take ".
President of the Republic of Belarus:

We will take it too.
The head of Belarus stayed in Sochi for the weekend.

used photos:website of the president of Belarus