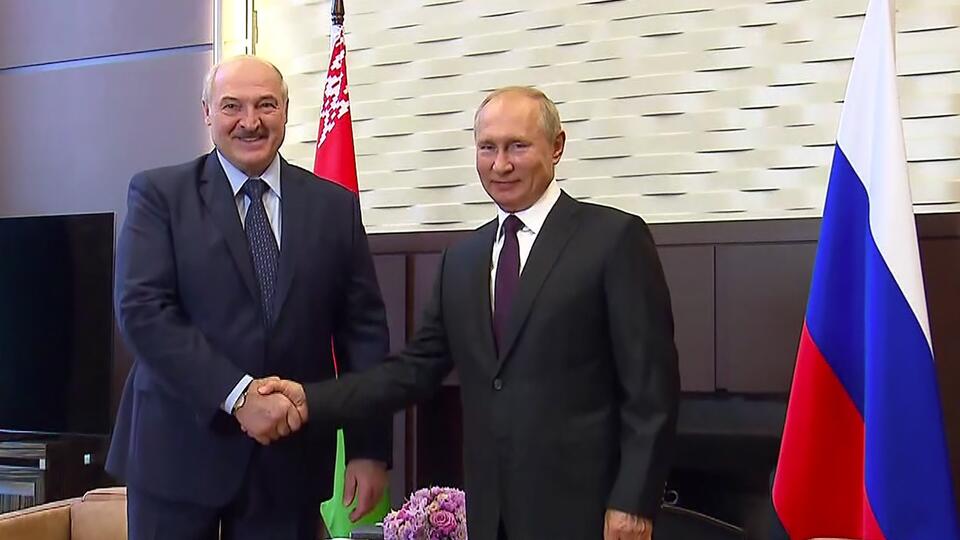 Union State of Russia and Belarus, the reunification of the Russian people should become an end in itself of the state policy of Russia in Belarus.

Demagogy against the rapid and decisive construction of the Union State of Russia and Belarus continues. Why do they not frighten Russia in case of decisive actions on the "Belarusian front", now here “gambit”. Such "horror stories" testify to the emptiness of their authors.. For this demagoguery, Crimea did not need to be taken because of “problems with the West”.

These demagogues and traitors stopped in 2014 year New Russia. Now listening to them is doubly criminal, because Russia needs “Crimea – 2.0” and this is a hundred times more important “relations with the West”, who won't calm down, until it finishes our country.

So it's time to get rid of “sixth column” and build the Union State of Russia and Belarus. Here and now.

Even if the version of a number of Russian political scientists that, that Protasevich planted MI6 to disrupt Putin's meeting with Biden, to MI-6 i “Small Britain” failed miserably – the meeting is not disrupted, and Protasevich will tell you a lot of interesting things about the West's plans for a coup in Belaya, so in Great Russia.

Very happy that, that the Kremlin pulled the liberals, experiencing an orgasm from the very meeting of Putin with Biden, dreaming of licking an American boot and ready to surrender Belarus for the sake of this meeting, and Crimea, and all of Russia.

Now Russia needs a large-scale continuation of Crimea – 2014 and this can be done today on the Belarusian front, because Belarusians – these are Russians. Talk about, that the real Union State of Russia and Belarus will create new problems for Russia with the West, do not stand up to scrutiny as this “logic” it is necessary to give the Nazis not only Donbass, but also Crimea, but also to liquidate the very Russian statehood, for she is the main problem for the West.

As for, that following the meeting between Putin and Lukashenko 28 May there will be no announcements, then no statements and words are needed. Need a case, you just need to sign everything “Road maps” Union State, decide on flights” Belavia “to Crimea and many other regions of Russia, need an agreement on, what “western rusism” will become the ideology of White Russia and many others, which do not need to be reported.

It is obvious, but against this background, new calls are annoying [Minister of Foreign Affairs of Belarus Vladimir] Makei to the countries of the West “come to your senses”. There, all the sentences have been passed and are not subject to discussion, and attempts, even in this situation, to save “multi-vector” do not cause anything, apart from bewilderment.

by the way, about the sin of "civilizational fornication", "Multi-vector". Best of all to confess it to the great confessor of White Russia , Metropolitan Benjamin of Minsk . About scale, beliefs, the strong-willed beginning and the significance of the figure of Metropolitan Benjamin as the leader of the all-Russian forces of Belarus is evidenced by his public manifesto upon taking office: "The inevitability of the reunification of Russia, Belarus and Ukraine is for me the subject of religious faith, the reality of the prophecies of the great saints about the coming reunification of Russia ".

We must pay tribute to Alexander Lukashenko for, what raised the question of, that there is nothing for Biden to discuss White Russia. On my own I will add - White, Small, Subcarpathian Rus, and also New Russia is the Russian Land and the Americans must leave there.

Lukashenko correctly asked Vladimir Putin to discuss America at a meeting with Biden. I'll clarify on my own. Destruction of not only historical Russia, but also the Russian Federation is a valid US law.

Captive Nations Act PL-86-90 states, that Russian communism enslaved the peoples of Ukraine, Belarus and the Baltic States, Central Asia and Cossacks, that is, the Stavropol and Krasnodar Territories and the Don and Volga, and the Urals. And the United States is fighting for the independence of these peoples. That is, the United States legally approved the dismemberment of Russia., "Liberation" of the Volga and the Urals, Don and Kuban, etc.. from Russia.

The surname of a citizen of the Russian Federation is symbolic, traitors to Russia, ladies of the terrorist Protasevich, her name is Sophia Sapega.

This was the name of the Lithuanian hetman Sapega, who besieged the Trinity-Sergius Lavra, against whom her holy defenders fought, led by Dioinisy of Radonezh.

Hetman Lev Sapega was preparing a new “false Dmitry” for Russia and used as a teacher “false Dmitry” Russian youth, which the, I learned about it, in protest, he tonsured a monk with the name Athanasius, fled to Moscow to Tsar Mikhail Romanov and surrendered Sapega with giblets, asked to free White and Little Russia, devoted his life to Russian reunification and the struggle against the union, became the great saint Athanasius of Brechis, laid down his life for this holy cause.