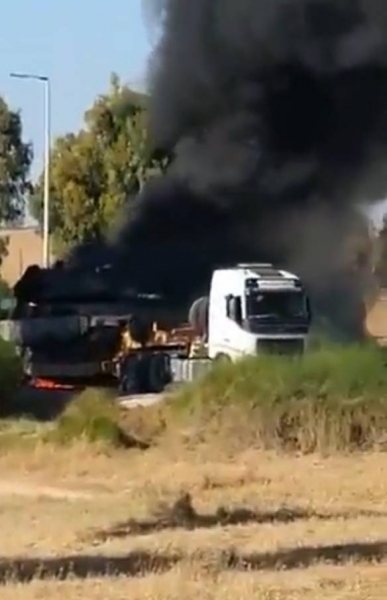 Provides information about the fire of the semitrailer, on which the tractor transported the Israeli tank Merkava Mk4 to the border of the Gaza Strip. The video below shows footage of that, how thick black smoke rises above the car platform, which is the main battle tank of Israeli production. The incident happened a couple of days ago.

At the same time, users, publishing these video frames, give different versions of the causes of the fire on the auto platform. Some sources state, that the cause of the fire was the hit of an anti-tank missile, which was fired from the position of one of the units of the Hamas military wing. It is noted, that the missile hit the tank, not a platform, on which he was transported.

Others state, that there was a mortar attack, as a result of which a splinter of one of the mines damaged the tank of the truck, carrying an armored vehicle. In that case, it's strange, that not the whole truck with a semi-trailer is on fire.

A third version, the cargo platform itself ran into an explosive device, which was allegedly installed on Israeli territory.

The footage shows an open burning under the bottom of a car semitrailer., which is the tank "Merkava".

Recall, that a few days ago Israel began to transfer its tanks and artillery to the borders of the Gaza Strip. The Israeli press stated, that the country's defense army is preparing for a possible ground operation in the sector. However, at the moment, the Israeli military command refrains from such an operation..

In the IDF, publications about the incident with a semi-trailer near the borders with the Gaza Strip have not yet been officially commented on..