Ukrainian nationalists held a "March of the Defenders" in Odessa 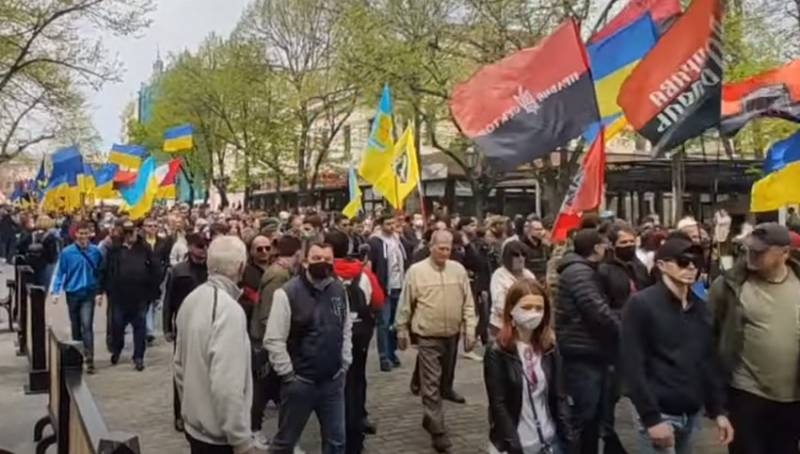 While the inhabitants of Odessa brought flowers to the House of Trade Unions, wreaths and lamps, to honor the memory of the victims, nationalists marched through the streets of the city.

Ukrainian Natsiks gathered on the Cathedral Square of Odessa, where in 2014 year, clashes between radicals and supporters began “Antimaydan”, after which we proceeded along Deribasovskaya street to Shevchenko park, where the meeting was held. On the column, led by the so-called. “veterans of anti-terrorist operation”, Flags of Ukraine fluttered, banned in Russia extremist “the right sector” (*) and the nationalist battalion “Azov”*, Bandera's greetings sounded, various slogans.

According to information on the Web, the procession is attended by radicals from all over Ukraine, not just local. The procession is named “March of the defenders”, organized by the Nationalist Party “National Corps”*, battalion-based “Azov”.

At this time, people with flowers continued to approach the square near the House of Trade Unions, to honor the memory of the victims. The whole square was cordoned off by the police, all passing were inspected, fearing collisions, but the atmosphere is calm.

Recall, what in 2 May in Odessa after the arson of the House of Trade Unions died 48 supporters “anti-Maidan”, hiding in the building from radicals, yet 250 people suffered. The Ukrainian authorities have not yet investigated the crime, the guilty are not punished. And there will be no investigation until then, while radical nationalists roam the streets of Ukraine, arranging their processions.