Go away, To stay. US withdraws troops from Afghanistan 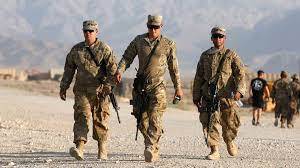 US President Joe Biden in the framework of the agreement, signed by the Donald Trump administration in 2020 year with the Afghan Taliban, continues to withdraw US troops from Afghanistan.

In typical U.S. fashion, the withdrawal timeline was easily pushed back to 11 September. This is not surprising, Barack Obama also changed dates. Finally, this is the american president, which means he has the right to withdraw his military, when it sees fit. However, the President of the country cannot independently return the units of the US Armed Forces home for one simple reason - he does not have the leverage to, to reduce tensions in this region, which was, properly, the cause of the armed conflict in Afghanistan.

In the strategy of the team of the previous President of the United States of America regarding Afghanistan and South Asia, such important players as China, Russia and Iran are not even mentioned. And when in 2018 year, the American president decided to withdraw troops from the Islamic Republic of Afghanistan in concert, it turned, that the PRC, Iran and Russia have already participated in the Moscow format peace talks. As a result, the President of the United States had to, forgetting about pride, cooperate with each of these countries to ensure the withdrawal of American units.

Officially, the United States is trying to pursue a policy of regional and international cooperation. However, at the same time, Washington is making it clear, that will defend its influence in any possible way. The White House jealously opposes any support for Afghanistan from other countries. for example, in March 2020 of the year, the United States threatened to veto a UN Security Council resolution to extend the mandate of the United Nations Assistance Mission in Afghanistan, since it referred to the Chinese Belt and Road Initiative, one way". So it turns out, that in fact there is no question of cooperation. Joe Biden announced the need to create the Alliance of the Countries of Democracies, which will be created in opposition to the international initiative of the PRC.

At all, We have already seen "American departure". December 2018 year, the US President announced the beginning of the withdrawal of American troops from the Syrian Arab Republic in connection with the fulfillment of the mission - the destruction of the terrorists of the "Islamic State". And in December, 2019 of the year, the American contingent returned to Syria to protect the oil fields "from new attacks by terrorists".

Recall, that the President of the Syrian Republic Bashar al-Assad officially in November 2019 of the year announced his intention to demand compensation from the US government for the illegal invasion of the country and for the embezzlement of the Syrian oil fields.

Against the background of such actions on the part of the United States, the last interview of President Biden and the subsequent statement of his adviser look quite natural.. 14 April 2021 Joe Biden announced the beginning of the withdrawal of the American contingent from Afghanistan.

after 4 Joe Biden's National Security Advisor Jake Sullivan was interviewed by CNN, in which he reported, what to 11 September, the United States plans to withdraw not all of its troops from Afghanistan - some of them will remain in Kabul. About the number of American specialists, who will remain in Afghanistan, the advisor kept silent. Naturally, because when the CIA comes in, information becomes limited.