Chilean citizens call for constitutional right of access to water 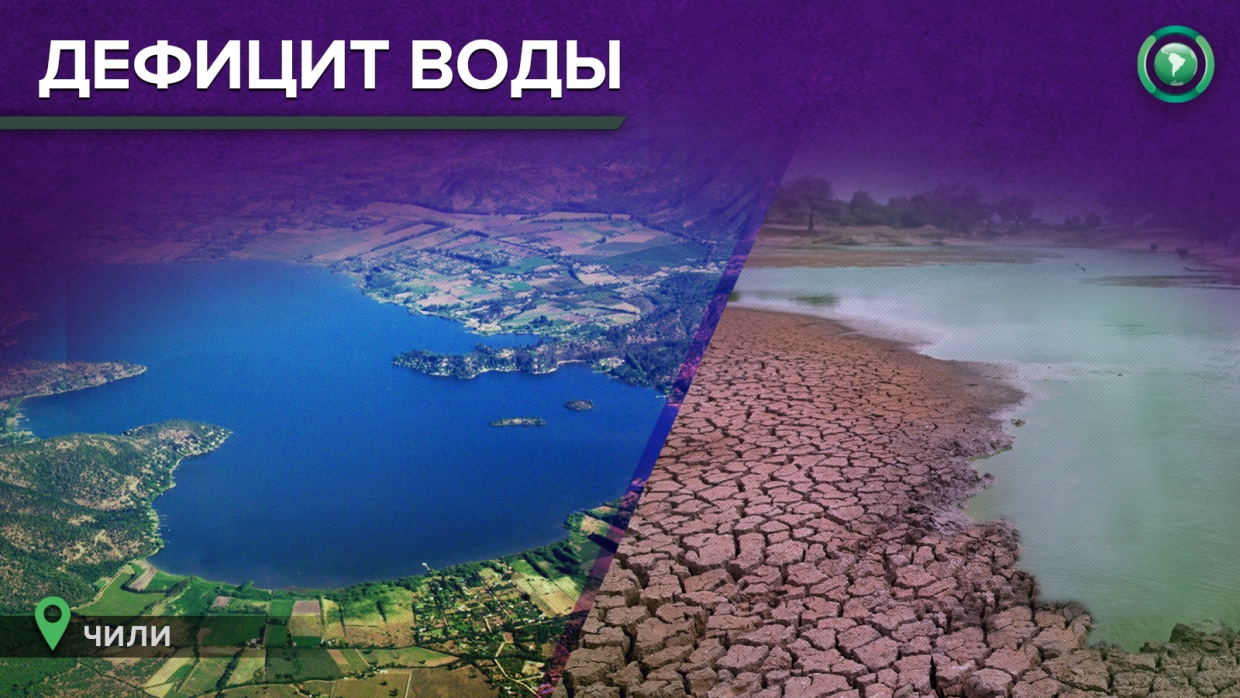 Everyone's right to access to water should be a priority as part of the drafting of a new Chilean Constitution. The current fundamental law of the state does not provide this right, approved by the international non-profit environmental organization Greenpeace, which insists on the need for reforms in the field of water use in the country.

22 March, many countries celebrate World Water Day. Greenpeace Chile conducted a survey on access to water resources and the consolidation of such a right in the country's new Constitution.

According to the survey, most Chilean citizens will vote for those candidates for the constitutional assembly, who undertake to include in the text of the new Constitution the right of every person to access to water of adequate quality and in the required quantity. For the candidate, supporting this position, will vote 95% respondents. 89% respondents consider, that the protection of several thousand people, who have no access to water, should be put at the forefront in the development of the draft of the new basic law of the country. 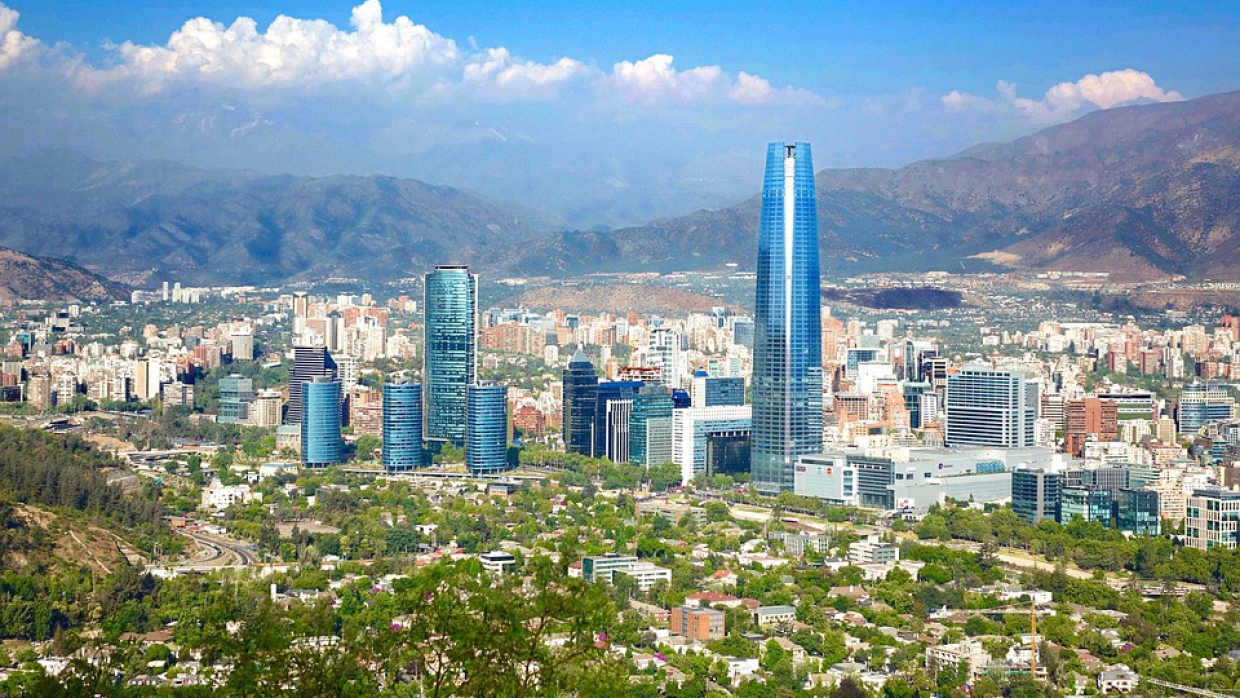 According to the results of a public opinion poll, held in January 2020 of the year, 63% Chileans are confident, that the acute shortage of water in the country is caused by the excessive use of water resources by large enterprises and weak legislation, which does not provide water protection and access to it for the population.

Almost a quarter of respondents consider, that the main reason for the shortage of water is the lack of attention of the current government to the issue of environmental protection. A 17% sure, that the water crisis is caused by climate change.

According to the coordinator of Greenpeace in Chile Estefania Gonzalez, the population is convinced, that the country has serious problems with the distribution of available water resources, which every year becomes less and less.

“While scientists are warning about the growing shortage of water resources, 98% water in Chile is used by large enterprises for production activities, and for the population only 2% ", - noted Gonzalez.

An NGO representative considers it “unacceptable that, that in the context of climate change, the right to access water is not enshrined in law ". Gonzalez added, that it is necessary to establish constitutional control over the country's water resources.

Greenpeace calls for water to be a national asset, which is distributed equally by the government. Representatives of the organization consider, that water use should be monitored by large agricultural, forestry and mining enterprises. At the moment, they willfully squander this resource and jeopardize people's access to it..

As of March 2021 of the year 77 municipalities of the country, located in nine constituencies, reported severe water shortages.

Heavy rains in February this year caused severe landslides in such areas., like San Jose del Maipo, where the Maipo River flows - the source of water for all of Santiago. 700 people suffered, hundreds of houses were destroyed, residents of the affected areas faced water shortages. 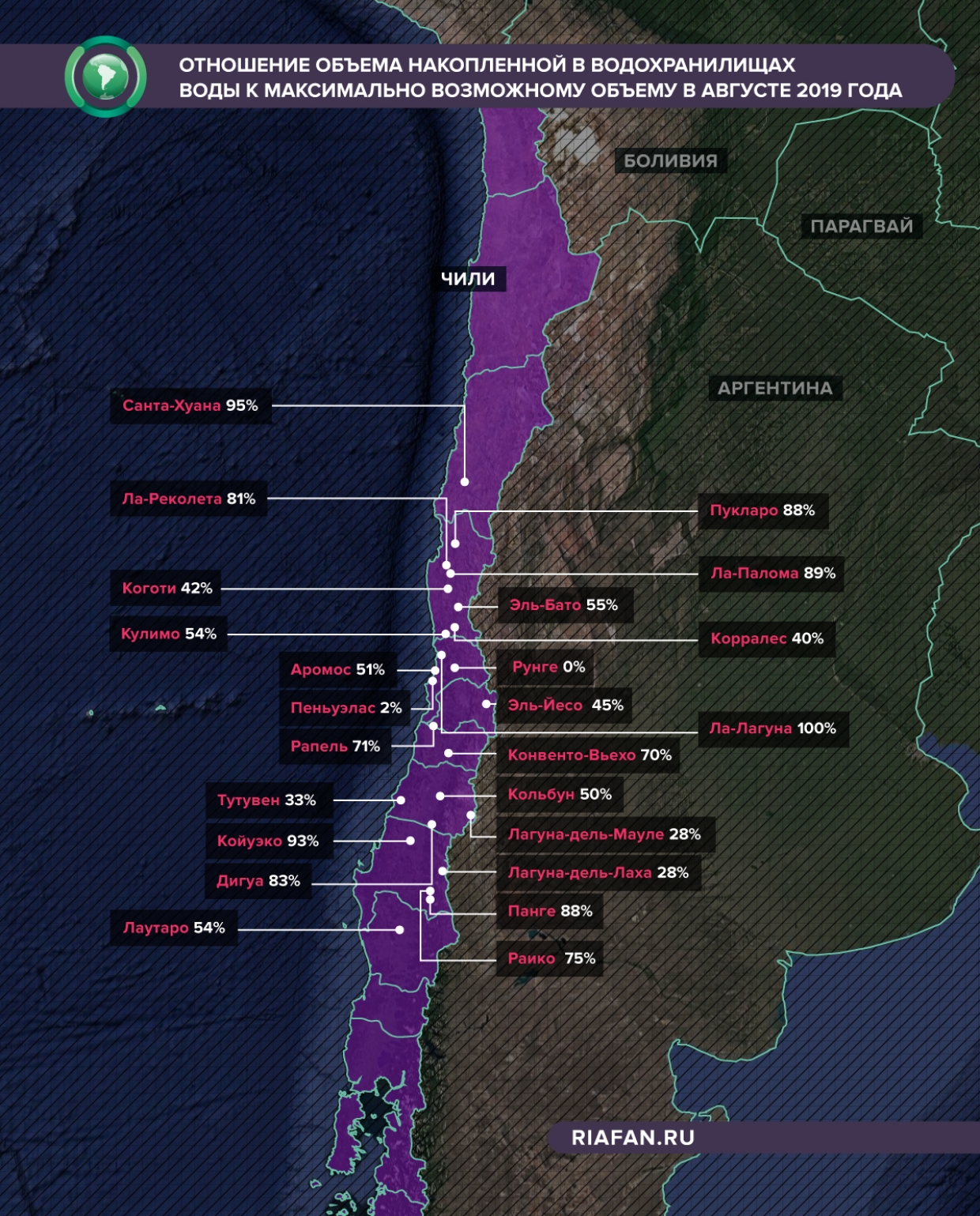 These events showed the vulnerability of the Chilean capital, as well as many other parts of the country in the face of natural disasters.

Dependence on one single water source, the water crisis and climate change threaten the access of the capital's population to water. Other parts of Chile face similar problems.

“Our water collection system at 70% depends on one river Maipo, which is highly vulnerable to natural disasters. When it rains heavily, precipitation from the top of the mountain falls into the river, filling it and causing a crisis in the water supply system ", - notes the geographer of the University of San Sebastian Pablo Saluchi.

Saluchi stated, that Santiago and the country as a whole need to build more backup water sources and develop new filtration technologies. The specialist also approves, that due to climatic changes such phenomena, like heavy rains and landslides, will happen more often and become more dangerous.

“We need to protect our forests, rather than encourage the expansion of housing, which replaces these ecosystems. In the area of ​​the Maipo river canyon, who suffered the most, cut down the forests, projects are under construction to the mouth of the Maipo, which gives us water ", - says Estefania Gonzalez.

Conservation groups have condemned poor water management for years, especially in central Chile. Greenpeace says, that an agreement was reached with Chile's largest water company Aguas Andinas, according to which more attention will be paid to the use of water resources, and the issues of their maintenance and maintenance of water pipelines will remain aside.

However, representatives of Aguas Andinas reported during the recent floods, that ten years ago the company invested in the construction of new underground catchments and reservoirs for drinking water. 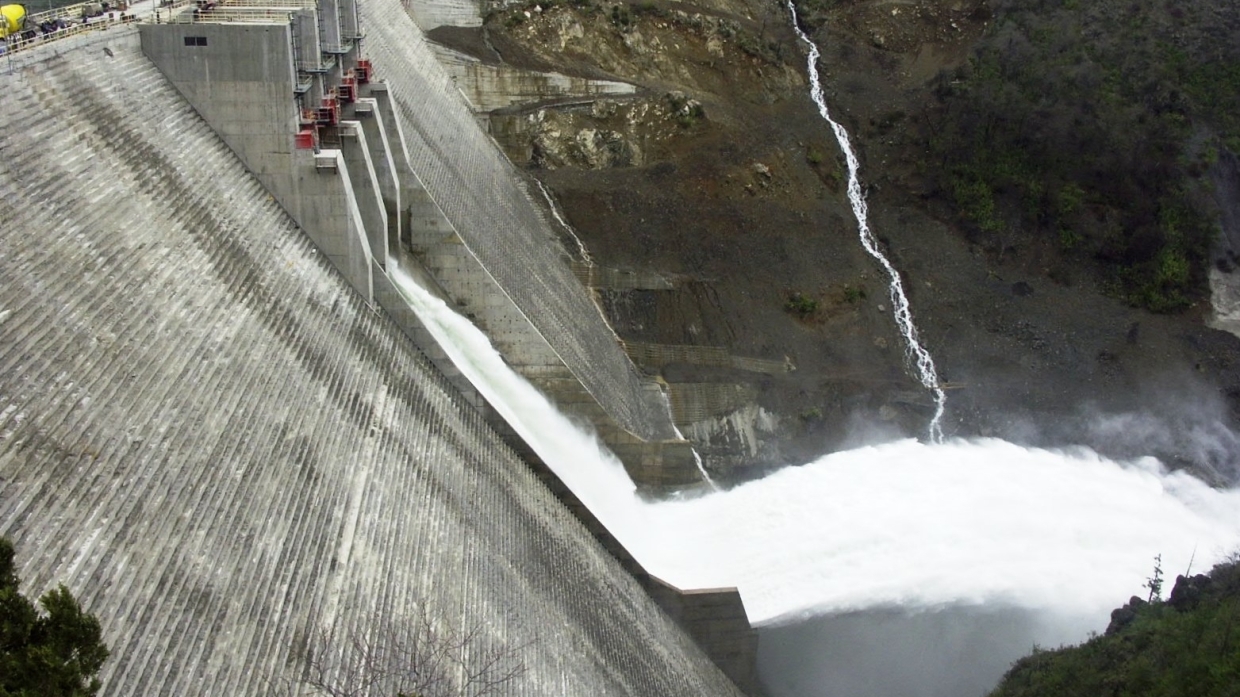 According to Greenpeace, 98% Chile's water resources are used in the mining and agricultural industries.

“Chile has a perennial water management problem, which are less and less. In the future, Santiago will not only suffer from the problem of the purity of the Maipo River, like now, but it will also face an increase in water supply interruptions ", - concluded Gonzalez.

Government in the fight against water shortages

Also in 2020 Chilean authorities reported water shortage. According to the head of the health service Jorge Rivas, river flow in the metropolitan area, in particular in the city of Valparaiso and in the O'Higgins region, were at an all-time low in 2020 year. The Chilean population had to accept the fact, that the water situation will not improve.

“We need to put in a lot of extra effort, as, if the current state of affairs continues, in summer 2021 year we will be forced to resort to the program of rationing of water consumption ", Rivas warned.

AT 2020 year, the government has taken a number of measures, avoiding such a distribution. At the same time, it was decided to replace the legislation., which will improve the management of the distribution of water resources in the country.

“We need to make changes in the legislation and institutions of the country on the issue of water resources, new laws need to be passed, in which the priority will be to ensure the use of water by the population ", - said the President of Chile Sebastian Pinera.

Water Code 1981 of the year, which is the legacy of the dictatorial regime of Augusto Pinochet, ensures the conversion of water resources into the property of the private sector, not a public resource. In this regard, many experts argue, that the development of new legislation is urgently needed to combat water scarcity.

Water shortage during a pandemic

according to a study, published by the World Resources Institute, to 2040 Chile will rank first in the world in terms of water scarcity, overtaking Botswana and Namibia.

During the coronavirus pandemic, the water problem hit people especially hard, lacking. On 2021 year, according to La Tercera, more 350 thousand. people do not have access to sufficient water, to wash your hands often. Chile's ten regions have cities and towns, water which is brought in tank trucks. 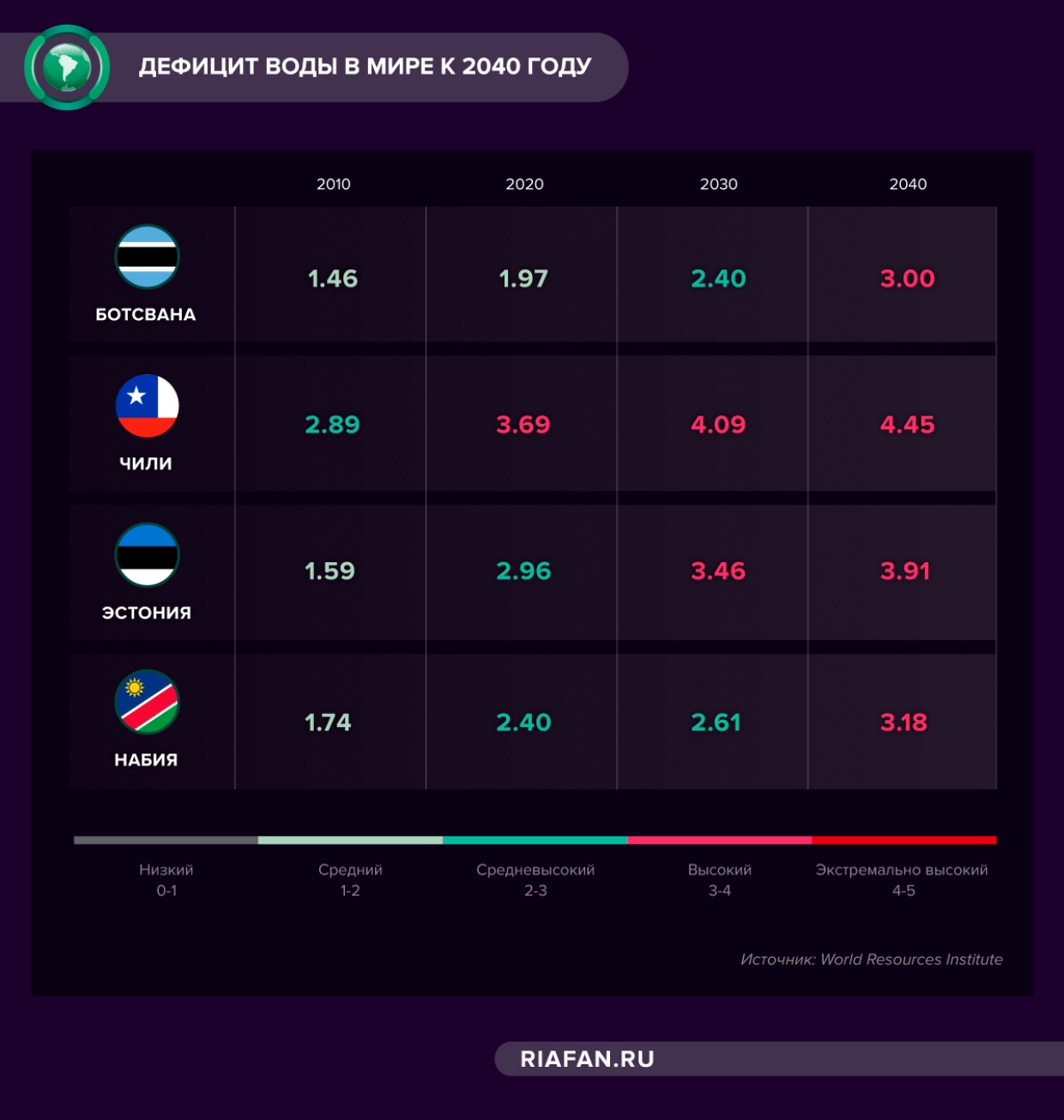 According to Greenpeace survey, nine out of ten Chileans consider, that access to water is a key factor in effectively combating coronavirus. Only 25% of respondents think, that the authorities have made enough effort, to reduce water shortages in the country.

Chile's government needs deep reforms, to eradicate the problem of water scarcity in the country, insist NGO representatives and experts in the country. Improving infrastructure, construction of catchment facilities and reservoirs, changing the way water is distributed, development of new legislation - all this is necessary in order to, to ensure that every Chilean has equal access to water of adequate quality and quantity.