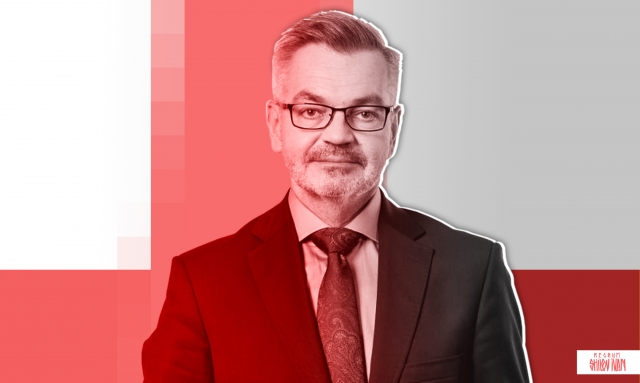 New Polish Ambassador to Russia Krzysztof Krajewski, who recently donated copies of his credentials to Smolenskaya Square, started his work with an unusual action. He recorded and posted a video message to the public., in which he outlined the priorities of his work in our country.

“Solidarity is our proposal for the coming years and a recipe for further development., said Polish Prime Minister Mateusz Morawiecki, - said Kraevsky. - I will look for contacts, the foundation of which will be the readiness for a sincere view of reality. Nikolai Gogol in his book "Dead Souls" wrote: “You need to start from the beginning, and not from the middle ". Polish-Russian relations are not easy. I am aware of this. My personal challenge will be to work on difficult issues in our bilateral relations.. I start my mission on the foundation of interpersonal contacts, which have united our peoples for many centuries ... Building good relations will be my priority. I will build bridges for cooperation in the field of culture ... I will support the development of economic relations between our countries ... I will actively work throughout Russia, in Russian regions rich in their cultural heritage. Their history hides more than one pearl. Poles contributed to the great geographical scientific discoveries in Russia <… their> heritage is the common heritage of our two peoples ".

It is interesting. In recent years, the Polish authorities and the propaganda apparatus have provided information as follows., as if Poland and Russia are on different planets, Poles - from Venus, and the Russians are from Mars. The new ambassador points to the centuries-old history of Polish-Russian relations in the context of uniting human contacts, what could be a hint of that, that Warsaw is ready to face such difficult times, like being in the Russian Empire and in the Soviet bloc, not only from a critical standpoint, but also finding some positive aspects, in order to offer our narratives to Russian society on this basis. As it appears, the emphasis will be on winning sympathy among the Russian intelligentsia. Some Polish experts believe, what is this promising direction, since, given the external conflict of relations between the authorities and the intelligentsia in Russia, the latter has a serious impact on the mentality of the ruling elite. Also in Warsaw it is believed, that the Russian intelligentsia is largely pro-Western, does not suffer from "imperial" and "nationalist" complexes, so you can deal with her.

The downside until recently was that, that the pro-Western part of the Russian intelligentsia "lost" Poland from sight, seeing their ideals in the USA and Western Europe. But now the situation is changing into an advantageous for the ruling Polish coalition led by the Law and Justice Party. (PiS) side, because the ongoing processes, especially in the United States with its immersion in aggressive leftist ideology, a culture of cancellation, fighting your own past, frighten even Russian sympathizers of the West, remaining adherents of the Western lifestyle and culture of the Cold War. This is good for PiS also because, that such a Russian intelligentsia will not find a common language with the opponents of the ruling coalition in Poland itself, because these representatives of the Polish intelligentsia share the views of leftist Western ideologists. Besides, Law and Justice in Russia may have unexpected allies in the person of the conservative part of the political Orthodox community, which sharply negatively assesses the attacks on Catholicism in Poland and takes to heart the struggle of the head of PiS Jaroslaw Kaczynski with the "moral revolution, which destroys the family, national traditions, all, what defines our identity ".

So if the new ambassador received instructions to start building bridges with Russian society, including relying on a common history, he will not start in an open field, there is a foundation, although he was battered by time. The problem will be, how much patience and determination will Warsaw have for slow creative work. After all, the approval of Kraevsky to the post was marked by a scandal, who came to the surface. Against this seasoned diplomat, who came to the Ministry of Foreign Affairs in 1993 year, the radical part of the ruling party spoke out, which is associated with the former Minister of Defense Anthony Macherevich and the Deputy Speaker of the Seimas Malgorzata Gosevska. As reported in January of this year, the Onet portal, Republika TV channel and Gazeta Polska, and then the TVP Info portal tried to discredit Kraevsky, giving out information, that he worked in the structures of the Polish People's Republic and, perhaps, connected with military intelligence of the NDP. As suggested by the publication, Kaczynski could have insisted on the ambassador's candidacy. If so, then Krajewski received a good credit of trust from the main person of Polish politics. But it's also obvious, that the ambassador's opponents will not calm down and will closely monitor his activities, to find mistakes.