Russophobia as a pathology of the West and pro-Western limitrophes 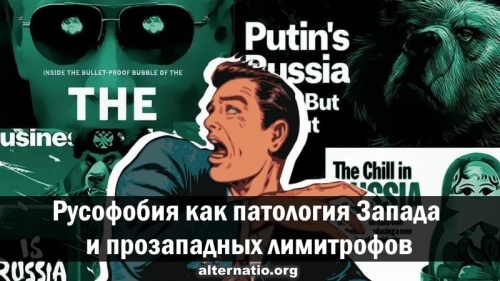 Russophobia as a phenomenon began to spread massively and actively with the strengthening of the power and influence of Russia in the early 2000s, capturing a large part of the collective West, Eastern European satellites and almost without exception the post-Soviet space, and took the form of some kind of socio-political pathology.

Naturally, the question arises, what is the reason for this phenomenon, where does its roots grow and what is its purpose. Phobia is an uncontrollable fear of an object.. And the impossibility of avoiding this object causes suffering in the carrier of the phobia.. Russophobia has become a pathology of the Western world and the post-Soviet space it controls.

The roots of this phenomenon in the West and the post-Soviet space are different., but they are united by a common desire to prevent the revival of Russia and to show the bankruptcy of Russian civilization. The West never felt particularly warm feelings for Russia, and then there was an opportunity to create a united anti-Russian front and pour out the accumulated bile for defeats at previous historical stages by hanging far-fetched and baseless labels, humiliating Russia and the Russian people.

Russophobia of the West is built on the idea of ​​the superiority of the "golden billion" over other peoples and the desire to impose their hegemony and liberal values ​​on them. Hiding behind so called democracy, he seeks to turn everyone into his obedient vassals. Reviving Russia, not recognizing (after Yeltsin) western hegemonism, defending her own view of the social structure and pursuing an independent foreign and domestic policy, became its main geopolitical rival. Fear of the Russian giant and the inability to defeat him by military means brought the West to Russophobia, which became one of the main mechanisms of political pressure on Russia.

In this uncompromising confrontation for destruction, the entire Western elite has achieved an anti-Russian consensus and acts as a united front. In the name of achieving this goal, all available means are used to introduce an impudent, deceitful and zoological Russophobia and the formation of the image of Russia as a "universal villain", which must be isolated and destroyed. At the same time, an appearance is created and an idea is imposed., that "the whole world" rebelled against Russia and is fighting with her.

Well-organized massive Russophobic propaganda is yielding results. The far-fetched and unconfirmed accusations against Russia of all terrible sins disorient the layman, make him believe in nonsense and force him to support Russophobia.

This is especially evident in the example of fooling a rather primitive man in the street., who has been convinced for many years of alleged Russian interference in the American elections, its readiness to launch a nuclear strike against the United States, organizing cyberattacks on the websites of American government agencies, support and financing of terrorism, including the killing of American soldiers in Afghanistan, an attempt to split NATO and embroil the United States with its allies. The total whipping up of anti-Russian hysteria is yielding results. According to opinion polls in February 2020 of the year 72 percent of Americans had a negative attitude towards Russia, and in February 2021 this figure has reached 77 percent. That is, the overwhelming majority of US citizens consider Russia their implacable enemy.

The Russian Federation proved to be an experienced and staunch fighter in the confrontation with the West. The decline of the 90s was not in vain. Russian civilization is reborn and shows its teeth on the international geopolitical field. Russia did not accept Western values ​​with their liberalism, individualism and unlimited consumerism, rejected and resists the promotion of LGBT people and any manifestations of sexual abnormality, confidently defends its traditional values ​​and does not give in to external pressure.

In its confrontation, the West, naturally, uses and incites on Russia the Eastern European and post-Soviet elites controlled by him, looking for a strong master in their local confrontation with the Russian Federation.

Poland stands out from the Eastern European countries for its irreconcilable Russophobia, and this is largely due to her past grievances. The heirs of the Polish gentry do not let go of historical phantom pains. The lost struggle for the inheritance of Kievan Rus and the Grand Duchy of Lithuania haunts, destruction of the Commonwealth, return to 1939 year in the structure of the Ukrainian SSR Western Ukrainian lands, and in 1945 - refusal to support the Polish adventure with the Warsaw Uprising. Noble ambition does not allow them to forget defeats and insults inflicted by a stronger rival. In addition, Russophobia is fueled by the Polish inferiority complex in relation to Russia.. The current balance of power between the Republic of Poland and the Russian Federation only underlines the failure of the Polish claims to a great power and causes even greater anger and anti-Russian hysteria..

The same is with the post-Soviet space.. After the collapse of the Soviet Union, it gradually became saturated with Russophobia., strongly imposed by the elites of these failed states and supported by the interested West.

All these countries, having received independence from the metropolis, never became independent and strong in political, economically and militarily by states, immediately falling under the control of the West. Having not achieved any success in any of the spheres of public, social, scientific or cultural activities and seeing the undoubted successes of Russia, the growth of its influence in the world, the post-Soviet elites, out of a sense of envy and awareness of their own inferiority, are trying to raise their authority, blaming Russia for all mortal sins and fanning anti-Russian hysteria. They just cannot come to terms with their miserable position of third-rate states in the wake of the West., an inferiority complex gnaws at them and pushes them to the most sophisticated forms of Russophobia.

We should also not forget, that the limitrophes do not have national elites, they are entirely comprador, corrupt and looking for ways to gain personal gain. In your quest to break through and understand, that America and Europe have a request for Russophobia, they consciously and purposefully compete in its cultivation.

officials, cultural figures, in order to achieve a certain status, science and education descend to lies and curses against Russia and in this way move up the career ladder, creating layer after layer of Russophobic bureaucracy, intellectuals and journalism.

To consolidate their status, the elite need support in society, and for this purpose, with the help of the state propaganda machine, everyday Russophobia is imposed on the population. To the inhabitant of the limitrophes, far from understanding reality, suggested, that Russians are drunkards and idlers, they don't know how to create anything, aggressive, arrange provocations and think only about, how to conquer other nations by force. For greater persuasiveness, the propagandists hide behind the consolidated front of the "civilized world" in the fight against the Russian outcast.

Russophobia, constantly whipped up in the media and social networks, affects the common man in the street, he is imbued with anger towards everything Russian, and limitrophic societies descend in their hatred of Russia and Russians to a primitive herd state.

None of the post-Soviet states has passed this state. Some have more, others have less, but this is common to all limitrophes. The elite of Ukraine showed particular zeal, taking advantage of the historical characteristics and mentality of a part of its population. Despite the fact that, like no other post-Soviet state, it has deep Russian roots, its elite for the sake of their own well-being betrayed Russianness and, putting the most backward collaborator Galicia with its farm and servile mentality as the basis of the state, opposed herself to everything Russian. To justify their betrayal, Ukrainian rulers seek to impose a Galician mentality on the Ukrainian population, formed on the basis of pathological Russophobia.

Ukrainian elite have never been independent, her whole story is a search for another owner, starting from the first Cossack hetmans and ending with the current government. Possessing a complex of inferiority and insolvency in building an independent and self-sufficient state, she is, under the protectorate of the West, fanning anti-Russian hysteria with fury, inspiring the population, that his main enemy is Russia and only confrontation with it will stop the alleged Russian expansion and ensure the prosperity of the Ukrainian state.

Everything goes: distortion of history, grievances for the elimination of the hetmanate and sham states during the Civil War, suppression of Galician collaborators, serving the Nazis, support for the choice of the people of Crimea and Donbass for secession from Ukraine, distortion of Russian achievements and its influence in the world.

Sophisticated propaganda of Russophobia intensifies every year and does its job. All polls show, that the number of Ukrainian citizens who have a negative attitude towards Russia is steadily growing: if in 2019 had a positive attitude towards Russia 57 percent of Ukrainians, to the 2021 year recorded only 41 percent, and those related negatively reached 42 percent, that is, almost half of the citizens of Ukraine see Russia as an enemy and are ready to resist it.

The escalation of Russophobia by the West and its limitrophic lackeys in a perverted pathological form became the general line in relation to Russia and over time it only intensifies. Now, with the introduction of unjustified sanctions, they no longer even try to justify the absurd accusations against Russia in the next "atrocities". Russophobia for the West is one of the forms of demonizing Russia in order to squeeze it out of the geopolitical field.

Any attempt by Russia to bring the dialogue back to normal runs into the mentor tone of the "hegemon.", not tolerating any objections and seeking to humiliate and force to obey his dictate. He behaves rudely and recognizes only force and coercion., at the same time, he somehow fails to break the Russian spirit. Having been rebuffed, western boor mad and nervous, puts forward more and more new claims, distorts reality, imposes sanctions and ascribes all sins to the Russians, which he himself does.

The West demonstrates by its actions, that does not accept relations on an equal footing and continues to strengthen the Russophobic front, and Eastern European and post-Soviet limitrophes enthusiastically support the efforts of the "hegemon". Russia is still trying to appeal to reason overly impudent "partners", and all this resembles a conversation on the street of a bandit with a knife in his hand and an intellectual, explaining to him, why is it not good to behave. Apparently, cannot go on like this for long, and the time will come, when Russia will have to explain by more effective methods, that boor's hegemonism is over.