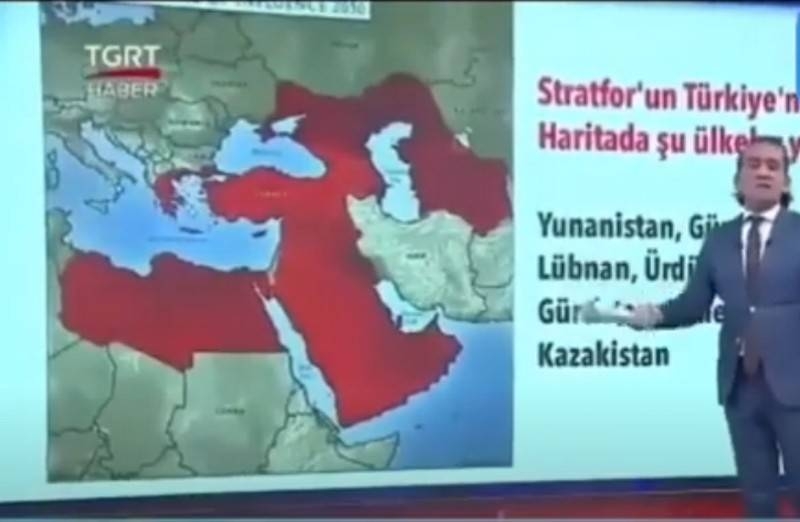 TO 2050 Turkey will significantly expand its sphere of influence, which will include part of the territory of Russia. Map with the expansion of the zones of Turkish interests, which was predicted by the American company Stratfor, showed Turkish state TV channel TRT1.

According to the Stratfor forecast, to 2050 Turkey will significantly expand its zone of influence, which will include part of the territory of Russia. According to analysts, Crimea will fall under Turkish influence, Krasnodar and Stavropol Territories, Rostov and Astrakhan regions, Kalmykia, other regions of southern Russia, as well as the republics of Donbass, DPR and LPR.

Besides, turkish influence, according to the forecast, will be extended to the republics of the North Caucasus, Uzbekistan, Tajikistan and part of Kazakhstan. Among foreign states in the sphere of Turkish interests will be the countries of the Persian Gulf, Libya and Egypt, Balkans.

Last year, Turkish President Recep Tayyip Erdogan said, that Turkey has every opportunity to expand its influence on other countries in the emerging world situation. According to him, Turkey must take the leading place on the political map of the world.

Political experts have repeatedly expressed the desire of Erdogan “gather under your arm” shards of the former Ottoman Empire. At the same time, Ankara is trying to act “soft power”, ie. through trade and economic, scientific and technical, cultural, religious and other impact on countries, surrounding Turkey. Erdogan pays particular attention to the religious factor, promoting the idea of ​​Islamization.