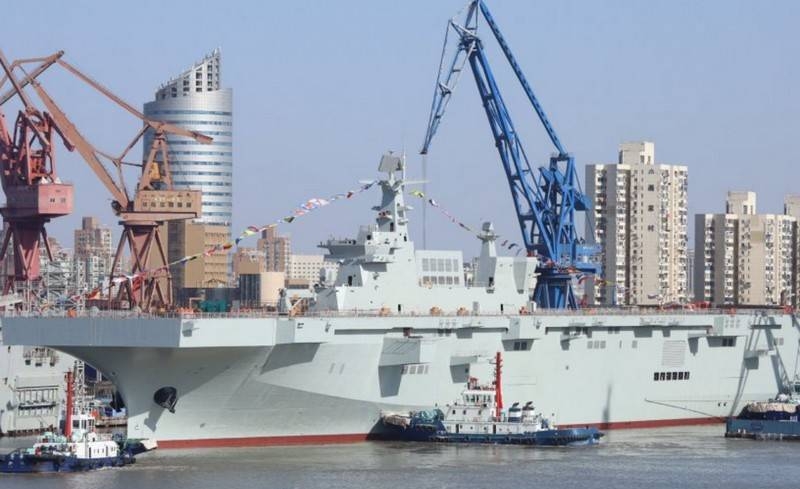 The third universal amphibious assault ship of the project was launched in China “A type-075”. Ceremony has passed 29 January 2021 years at Hudong-Zhonghua Shipbuilding (a division of China State Shipbuilding Corporation - CSSC) in Shanghai.

China traditionally does not cover such events at the official level.. known, that the construction of the third universal landing ship (UDC) “A type-075” for the PLA Navy began in the spring 2019 of the year. The lead ship of the series since August 2020 years tested, its commissioning is scheduled for this year. The first serial UDC, launched in December 2020 of the year, currently undergoing sea trials.

As previously reported, at the first stage, the PLA Navy plans to introduce three helicopter carriers of this type out of eight planned for construction. Most likely, the remaining five UDC will be built according to the modernized project “A type-076” with increased displacement.

Project Type universal landing ships-075 have a displacement of 36 thousand tons in length 235 m, which is comparable to American UDCs of the same class such as Tarawa, Wasp и America, having a length 254-257 meters and full displacement from 40 to 46 thousand tons. The width of the Chinese helicopter carrier - 36 m, sediment - 8,5 m. The design speed of the UDC is 23 host, cruising range at speed 15 knots - about 10 thousand. nautical miles. The ship can accommodate up to 1500 marines and more 70 meals. equipment. Besides, UDC can carry 28 transport and attack helicopters of several types (Z-8, Z-9, Z-18, Ka-28, Ka-31), perhaps, and the ship version of the new Z-20.

The UDC's own weapons will be, according to some, 30-mm artillery complexes H / PJ-11 and anti-aircraft missiles HHQ-10.