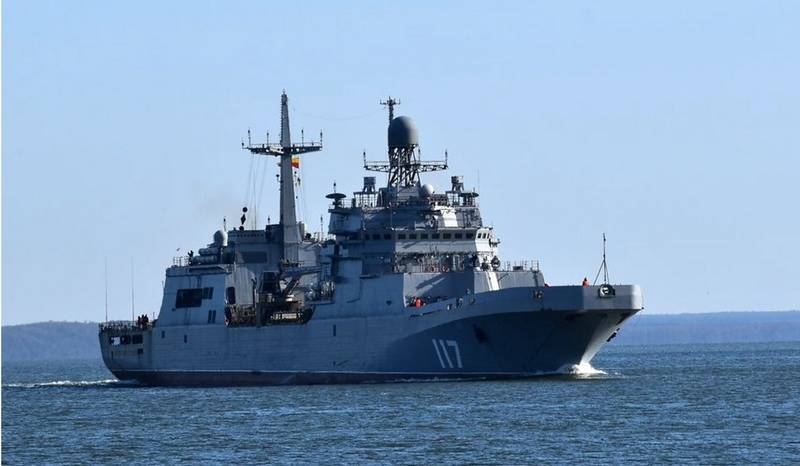 Large landing ship (BDK) “Petr Morgunov” project 11711 completed the inter-fleet passage and arrived in Severomorsk – main base of the Northern Fleet. It is reported by the press service of the fleet.

Commander of the Northern Fleet, Admiral Alexander Moiseev, congratulated the crew of the large landing ship on arrival at the permanent duty station. The ship will become part of the amphibious assault ships of the fleet and will operate, basically, as part of the Arctic fleet grouping in the seas of the Arctic Ocean.

The ship will take part in the upcoming exercises of the Northern Fleet. The plans for combat and operational training for him have already been drawn up.
– the commander said.

BDK “Petr Morgunov” is the second ship of the project 11711 and the first serial after the head BDK “Ivan Gren”. Laid down in June 2015 year and launched 25 May 2018 of the year. The construction of the ship was carried out with delays, since I had to correct mistakes, allowed in the design of the lead ship. State tests completed in early November 2020 of the year, naval handover officially took place 23 December.

BDK 11711 able to accommodate 13 tanks or more 30 BTR and BMP. Also, the ship provides for the placement of a reinforced marine battalion, as well as the temporary basing of different types of shipborne helicopters. The ship has a cruising range in 4 thousand. nautical miles, that allows you to perform tasks in the far sea zone.

Currently, the GCC “Amber” there are two ships of the project under construction 11711 — “Vladimir Andreev” and “Basil Trushin”. Both BDKs are being built according to a modified design and will become part of the Pacific Fleet.