Zeroed 2020: why the constitutional amendment campaign was Putin's blunder 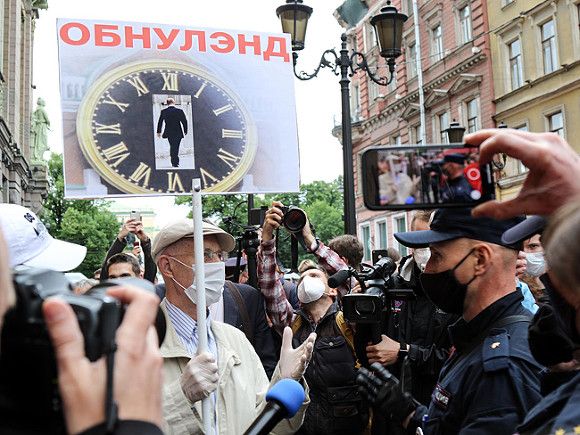 Formally speaking, then the main political event of the past year was the popular vote for the constitutional amendments. By the degree of its unusualness, it is difficult to put it next to anything. Nothing like this has happened in the 21st century. Vladimir Putin's regime categorically rejects plebiscites. They contradict his very essence.

Nevertheless, such an exceptional event has already been forgotten by the people.. And in socially active circles, if I remember, then perhaps as an example of the opposition, allegedly did not want to persuade voters to say a weighty "no" to the eternal rule of the current president.

In reality, this whole saga is a series of government blunders, explained, one side, their growing inadequacy, and on the other, just bad luck. A few years ago, luck left the regime and its head., но они продолжают держаться так, будто она по-прежнему на их стороне.

Исходной целью конституционного плебисцита было не просто обнулить лимиты на правление. The people by their vote should have given the power of Vladimir Putin a new sacredness. There was no other point in this vote.

After all, the Constitution has already been changed several times without any plebiscites.. The procedures prescribed in it do not require public participation at all., including for the extension of the ruler's power. In 2008, eg, increased the presidential term from four to six years. If it were not for this amendment, the next two Putin terms would have expired already last spring (2012–2020), and so they will end only in 2024. And notice, this extension did not cause any excitement in those comparatively free years. The people did not take to the streets. Wouldn't come out now, if zeroing in a solid bureaucratic manner were carried out through chambers and local assemblies.

An ordinary Russian has no doubts for a long time, that Vladimir Putin intends to rule so many, how much will it turn out. And an ordinary citizen does not believe in formal restrictions any more., than the leader. If voting is capable of stirring up the broad masses now, then maybe, in which the usual ruler would be opposed by some figure independent of him. All other types of voting are no more fateful in the eyes of the electorate, than the Soviet-style "elections", which were forgotten the next day after the forced drive on them.

Vladimir Putin's obvious mistake was faith, as if making amendments through a plebiscite would give him some extra points.

But if he really believed it, then he had to show consistency and allow at least a little competition of opinions and positions. To make the win look like a product of some kind of struggle. Instead, he conducted all the training in the format of his usual special operation.. And this was his second mistake, pre-depreciating plebiscite.

The leader announces future amendments 15 January 2020. This is not at all a response to some popular call. It's a surprise. Nobody asks to change the Constitution. But that, that this is not a joke, immediately visible. On the same day, Putin creates a working group - as if to draft amendments. Its personnel exclude any discussion in advance..

While the jumper Isinbayeva entertains the audience with her unwise thoughts, the public is waiting - well, when will the thesis on the extension of the deadline be announced? The weeks go by, tsar's people gush with aggressive fantasies, interest drops to almost zero. And then, 10 Martha, the word about zeroing thunders from the lips of Valentina Tereshkova.

No authority to extend presidential terms its formal authorship, of course, does not add. But the main thing now is not to slow down.. And three days later, 14 Martha, federal law comes out with 206 changes, named, so as not to complicate the procedure, just "amendment", - and with the appointment of a plebiscite on this matter at 22 April.

Procedural rules are composing on the knee. Legal formalities are not taken care of, rightly relying on, what instances, inclined to find fault with something, not in nature.

People, who asked no eternal reign, no verbose exercises on ultra-conservative topics, still deeply indifferent to the event, although she does not show anger. People think, that this does not promise anything new for them. And generally right. Old Constitution, with all her freedoms, did not prevent the authorities from prohibiting everything, what caught his eye.

Propaganda is trying to switch popular interest to vague promises of some kind of social benefits and indexations introduced into the text. Over time, for these invented guarantees to divert the eyes, perhaps, will have to answer to my subjects. But not right now. There is already an epidemic in the yard, and people's thoughts about her.

If not for the plebiscite, then all formalities would be instantly completed and the amendments would come into force in March. And so I had to get on my own impatience, postpone the vote and drag out the hateful campaign for a few more months.

In the end, everything came together on paper: turnout - 68%, "For" - 78%. Together, this is slightly more than half of the voters on the list., t. it is. so much, how much was projected.

In the intellectual circles, it took a long time to understand, who from the opposition gave the wrong advice to the people, and this discussion was the only at least somewhat noticeable success of the authorities in the entire correctional epic. However, intellectuals will always find something to argue about.

In fact, even the most categorical and unanimous calls to vote "against" would have responded by tens or hundreds of thousands, but certainly not millions. The popular majority did not consider this vote important for themselves, and no one could convince him otherwise. And do we know, what was the actual result? According to alternative estimates, in the reliability of which you can believe or not, the number of people who actually voted was much less, and there were not four times more votes in favor, than against, but twice. This is not at all the same mandate of sacredness and legitimacy, for which such a complex and inconvenient event was arranged.

Putin will never admit his mistakes. But the regime after the plebiscite behaves like this, as if I didn't score points on it: triumph does not trump, does not always remind of the people's pleas to rule, and the bans that are being stamped now are not checked against constitutional amendments, but with their Belarusian-Khabarovsk fears.