Nagorno-Karabakh: Russia's peacekeeping mission facing the challenges of the West 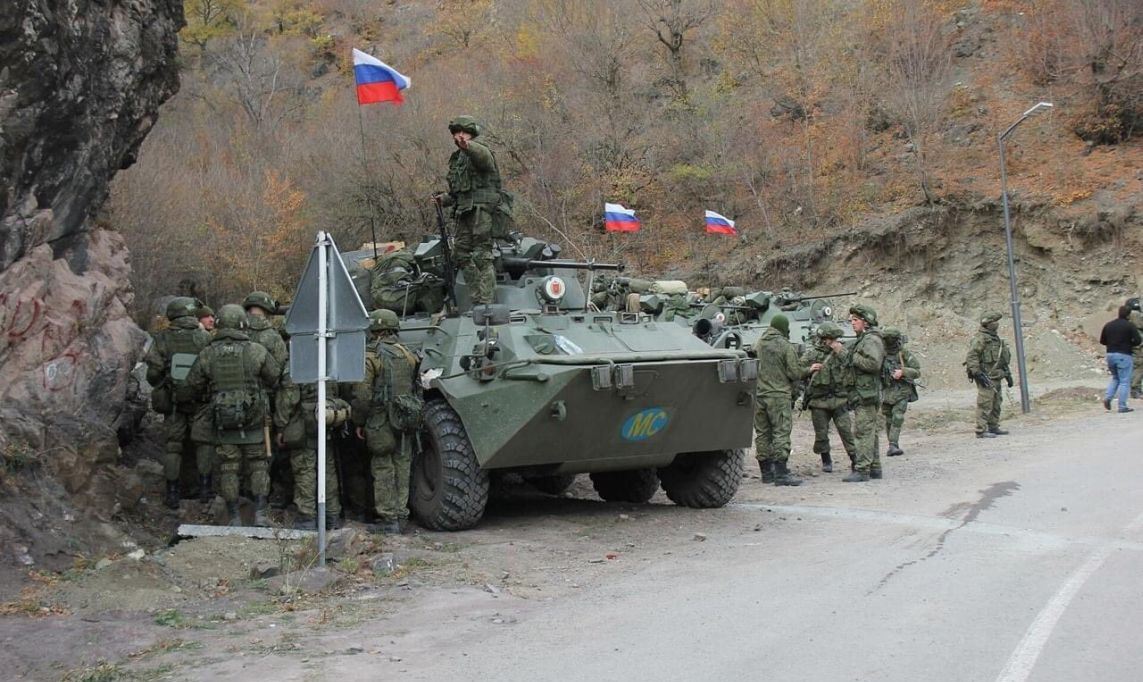 Taking advantage of the paralysis of power in Armenia ...

Answering 16 December, to the question of an Azerbaijani journalist about ways to help the countries of the region in countering "Russian influence", Clark Cooper, US Assistant Secretary of State for Political-Military Affairs, said the, due to the deployment of the Russian peacekeeping mission in Nagorno-Karabakh. breakwater, in Washington advocate peace talks on Karabakh with the participation of the OSCE Minsk Group, and "Pay extra attention to the humanitarian space". true, how is this "extra attention" expressed, when Russia solves large-scale and complex humanitarian tasks in the region, remains unclear. 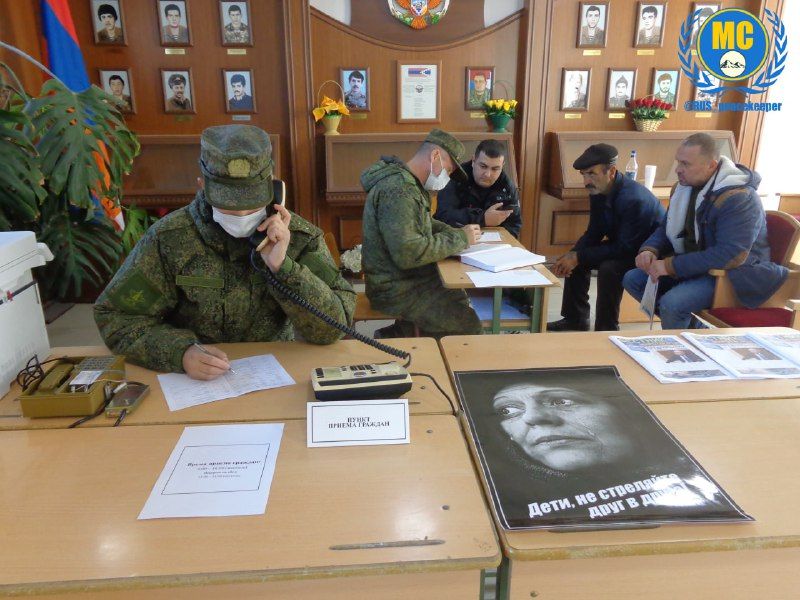 It's hard to say yet, Will it be possible to resume the activities of the international mediating format after a radical change in the military-political scenery in the South Caucasus?, caught up, to put it mildly, not too effective. During their recent visit to Baku, the OSCE Minsk Group co-chairs received a harsh harassment from President Ilham Aliyev, not tired of repeating, that the Nagorno-Karabakh conflict "is in the past", and the status of Karabakh "went to hell". After six weeks of war, it was possible to suspend hostilities solely as a result of the active mediation of Moscow., while Robert O'Brien's reasoning about sending "Scandinavian peacekeepers" to the region turned out to be idle chatter. 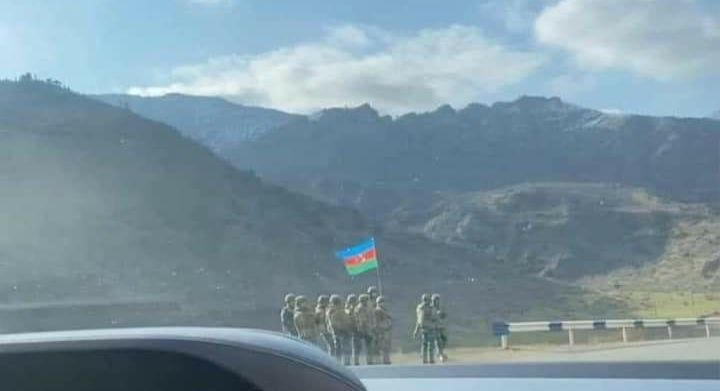 Taking advantage of, based on the results of the activities of Pashinyan and the forces associated with him (from pseudo-religious sects to Soros' nest pets), paralysis of power in Armenia, Baku strives to fix a favorable configuration of borders. First of all - in Syunik, where the main road is at stake, connecting Goris with Kapan and Meghri, but also in Vayotsdozr and Gegharunik, that is, in those areas, who are a graduate of MGIMO, speaking 10 December during a military parade, designated as "primordially Azerbaijani lands". Focusing on holding on to ephemeral power, Pashinyan and his people, looks like, shift the solution of key security issues to the remaining "Armenian" part of Karabakh and Armenia itself (up to delimitation and demarcation of disputed border sections) for the Russian military. At the same time, any incident will be presented by the pro-Western media as an anti-Russian argument in favor of establishing "good neighborly relations" with Baku and Ankara.. Trap, Goris and many border villages of Syunik region, As in 1991-1992 gg., again found themselves under direct threat of shelling and sabotage and terrorist attacks. 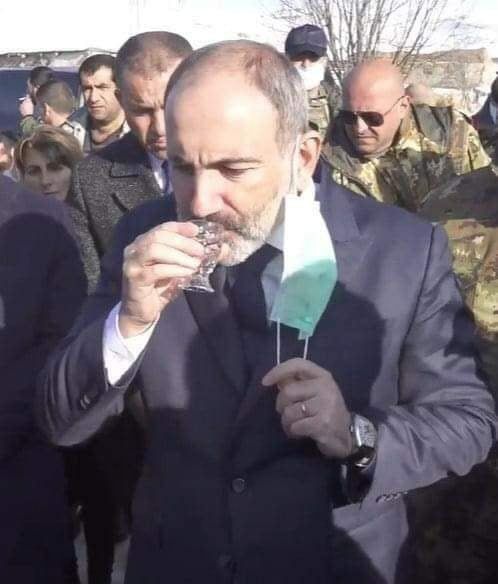 Ilham Aliyev's recent speech at the summit of CIS heads of state testifies to his support for Pashinyan with his sectarian outlook and defeatist policy; the main provisions of this course have been repeatedly stated and formulated by the "Haykakan Zhamanak" newspaper over the past two decades. Hypothetical signing of a border treaty with Azerbaijan (hastily demarcated by Google-maps, in the presence of "unclaimed" cards and in the absence of a specialized service. disbanded in advance six months ago) and the final "withdrawal of Armenian troops" from Karabakh, as required in Baku, will transfer Yerevan to the rails of "new political thinking" with a refusal to support the Karabakh Armenians, who will henceforth be considered as "citizens of Azerbaijan". After that, most of them moved to Armenia, and many to Russia will be just a matter of time. This means, There will be no need for a Russian peacekeeping mission, already the target of veiled attacks. So, In Azerbaijan, the inclusion of the Armenian villages of Khtsaberd and Khin-Taher in the Gudrut region in the zone of the Russian peacekeeping operation was discontent (within the borders of the former NKAO), almost completely captured by the Azerbaijani army with the support of the Turks in October 2020 of the year. 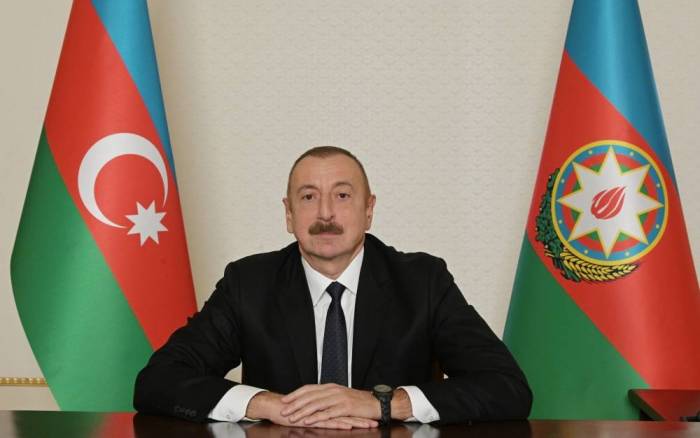 Azerbaijani President makes another address to the nation

Truce, achieved on the night of 10 November through the mediation of the Kremlin, followed by a "peacekeeping intervention", prevented Baku from occupying the remaining territory of Karabakh, including Stepanakert (Hankendi), complain in Azerbaijan and the West. From several messages of President Aliyev, one can conclude, that Baku's consent to the peacekeeping mission of Moscow was obtained in exchange for guarantees of the transfer of the Agdam, Kalbajar and Lachin regions, battles for which would be fraught with heavy losses. Rapid deployment of Russian peacekeepers (this word is often written in quotation marks) secured "the continued retention of a part of Nagorno-Karabakh by Armenia", and in the future Moscow can allegedly create conditions for the creation of a "Russian protectorate" in the enclave. Dissatisfaction with the actual excess of the number of Russian military personnel in excess of those indicated in the statement is expressed 1960 people at the expense of specialists of the Interdepartmental Humanitarian Center established by the decree of the President of the Russian Federation, including specialists from the Ministry of Emergency Situations of Russia and others responsible for humanitarian actions of "paramilitary departments". The command of the peacekeepers by Colonel-General Rustam Muradov and the chief of staff, Major-General Andrei Volkov is presented as allegedly "disproportionate" to their declared number. 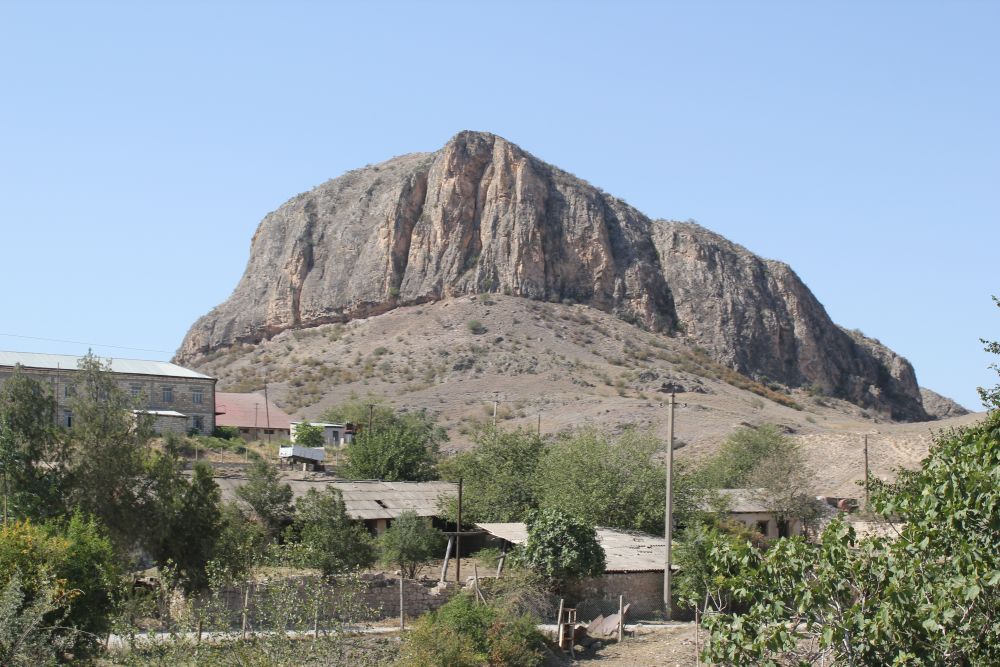 The statement on the cessation of hostilities does not contain any reference to any legal or political status of Nagorno-Karabakh. De facto, it turned out to be divided into a southern, the part controlled by Baku (to 40 % the territory of the former NKAO) and the rest of the territory, protected by Russian peacekeepers. However, the terrain and the positions of the opposing sides suggest the formation of numerous "gray zones", capable of becoming a source of serious problems. Any, repeat, the incident will be inflated by the analogy between Nagorno-Karabakh and South Ossetia, Abkhazia, Transnistria, also under the protection of Russian troops from attempts at military "re-incorporation" of them by Georgia and Moldova, respectively. Moscow's cooperation with the authorities of these de facto states is seen as a path to their gradual isolation from the former metropolises. To simplify logistics, the Russian and Armenian sides are considering the possibility of restoring and modernizing the airport in Askeran region, which means the creation of direct communication between Russia and Artsakh. "Warm meeting [R. Muradov and President of Nagorno-Karabakh Araik Harutyunyan] and the lack of distance in relations between Russian peacekeepers and separatists "causes discontent in Baku, as well as the maps of the operation with changing borders in certain areas, published by the Ministry of Defense of the Russian Federation. 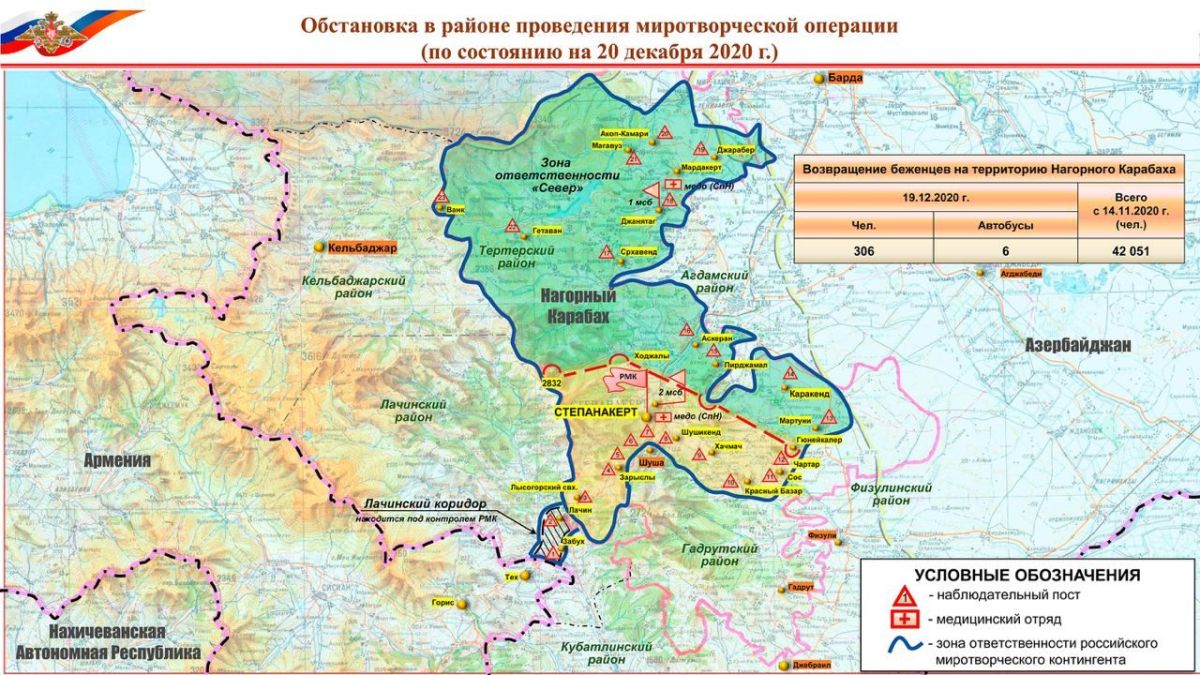 Map of the Russian peacekeeping operation in Nagorno-Karabakh

According to the replicated nationalist narrative, at 1920 year, the "Russian Bolsheviks" easily defeated the Musavat regime, not least because, that the army of the "Azerbaijan Democratic Republic" was diverted to the "war with Armenia in Karabakh". At the end of the 1980s, Moscow's position in connection with the growing conflict was viewed as "pro-Armenian", and success in 1992-1994 gg. in a number of areas of the Karabakh self-defense units and Armenia, which helped them, were explained by the help to them from Moscow and the "Armenian lobby" in Russia. In a broader context, the Karabakh conflict is viewed in the context of "imperial intrigues of Russia", striving with the help of Armenians to gain a foothold in the Caucasus. Notably, that in the early 1990s and Abulfaz Elchibey, and Heydar Aliyev, who replaced him (father of the current president) consistently rejected the idea of ​​deploying a Russian military contingent, despite the fact that Azerbaijan was then immeasurably weaker, than now.

Deployment of Russian peacekeepers in Nagorno-Karabakh a quarter century after the end of the "first war", in a fundamentally different situation, is already becoming a reason for unwinding negative allusions, against which arguments of a pragmatic nature are often powerless. Artificially provoked accusations of "destabilization" of Nagorno-Karabakh by Russia are accompanied by accusations of non-compliance with the requirements of the UN and the approaches of the "OSCE Minsk Group", according to which any peacekeeping operation in the region should exclude the troops of the allies of one side or another, neighboring countries or co-chair countries. This refers to Russia as a military-political ally of Armenia, which guarantees the preservation of state structures of the unrecognized Nagorno-Karabakh Republic, what the "western partners" are very worried about. That fact, that blood stopped flowing, they don't care, geopolitics is more important. After all, if negotiations in some form resume, then Russia, after achieving its "long-standing goal" is capable of exerting "decisive influence" on them, including relying on its "military presence on the ground".

As a factor, "Balancing" Moscow's efforts to stabilize the situation, "neo-Ottoman" Turkey will be used, acting in the Transcaucasus, including as the closest (uneasy) partner of Washington and especially London. Ankara does not need to find a balance between the opposing sides, one of which is seriously weakened by military defeat and the most acute internal political crisis. The level of ties between Ankara and Baku makes it possible to increase the Turkish military presence in the Caspian republic so much, as far as Ak-Saray deems it necessary. And then possible problems in the activities of Russian peacekeepers will be turned around for public opinion in Azerbaijan to the benefit of Ankara.. Finally, despite the information about the return to the Middle East of some of the terrorist group militants deployed for the war against Karabakh, the rest could stay in place "on demand".

All of the above does not make the Russian peacekeeping operation in an unstable, rapidly changing region lighter. As the consolidated NATO line is shaped on an anti-Russian basis, the challenges to Moscow in the Transcaucasus acquire a new dimension.