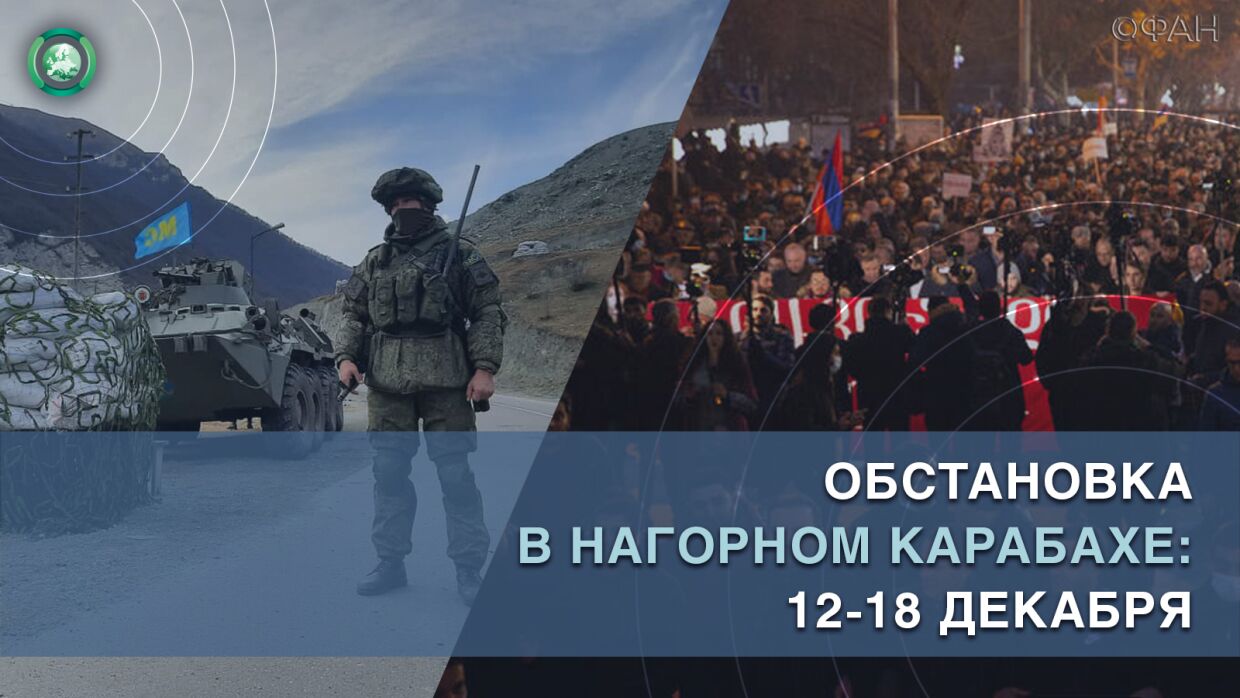 The situation around Nagorno-Karabakh was filled with many problems last week. Like Murphy's Law 'If something can go wrong, it will go wrong ", the process of demarcation of the new border between Armenia and Azerbaijan took place. And although the resumption of fighting was avoided, the first Russian peacekeeper was killed this week, and many Armenian militias were captured.

The situation in Karabakh was very difficult last week. Those reasons, which were initially indicated as prerequisites for aggravation - the absence of clearly delineated borders between states and the dashed line of contact between the parties, began to lead to daily incidents. 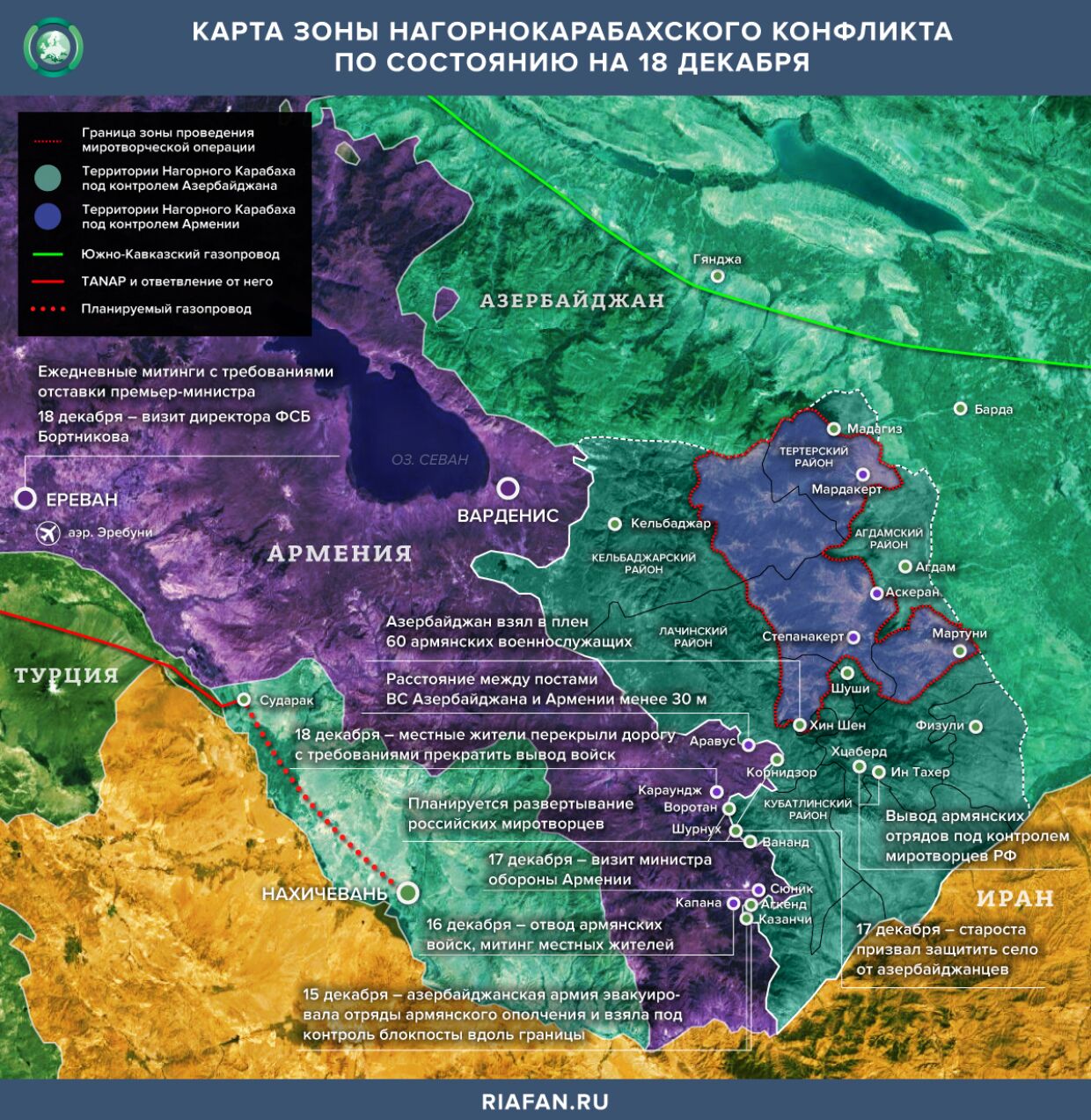 Different interpretation of the sides led to the emergence of points of tension in those places, which were not spelled out in the tripartite agreement, and from this they were considered by the Armenian side as their. In its turn, Azerbaijan was guided by the logic of the treaty and the old maps of the borders of the USSR, what the Russian side agreed with in the end, and Yerevan tacitly confirmed.

Thanks to this, the scenario of the Hadrut region did not spread.

Nevertheless, Special Forces of the State Security Service of Azerbaijan continued to carry out "counter-terrorism measures", capturing many Armenian soldiers.

TO 14 December it became known, that in the Khzabert area was surrounded by a large detachment of up to 60 human. Later, with the assistance of peacekeepers, he was withdrawn, while the presence of the dead indicates the fact, what a fight was.

17 December another video was distributed, where was taken, as it appears, volunteer detachment from Shirak region. reported, that they are already on the territory of Armenia.

In the same time, to 16 December, the problems of demarcation reached the border with the Syunik region of Armenia.

In this sector, the Armenian Armed Forces had defensive positions, equipped at favorable heights outside the country. Besides, for many years of "independence" of Nagorno-Karabakh, most of the border villages have grown in size, and of course, also went beyond the state border. In this regard, it is not surprising, that GPS demarcation showed a violation of the de jure border between the Armenian and Azerbaijan SSR, and the parties agreed to apply the administrative-territorial division, in force at the time of the collapse of the Soviet Union.

At the same time, in the Armenian segment of the Web, a powerful information campaign was launched in advance with the accusation Nikola Pashinyan in the surrender of the allegedly entire territory of the southern part of the country.

Despite protests from local militias and Kapan residents, the Armenian side nevertheless fulfilled its part of the deal and shifted its positions inland.

Syunik residents will keep roads closed, until an adequate person appears
The surrender of positions to Azerbaijan in the direction of Syunik puts this region of Armenia at risk. And Syunik is the backbone of the country. Sputnik Armenia correspondent about this ...
More on https://t.co/j0O4F11u3s pic.twitter.com/Vqp2lmBg3M

Monitor the situation on the spot 17 December, the Minister of Defense of Armenia came personally Vagharshak Harutyunyan, since the issue of withdrawing troops from the borders is entrusted to the military.

The Minister of Defence visited the SE border, in particular, the areas where the distance between the Armenian and Azerbaijani positions, in some cases,is about 100 meters. V.Harutyunyan followed the combat duty in the new lines, discussed issues with the commanders & servicemen pic.twitter.com/WwVMyHArUB

On Monday, 21 December, Prime Minister Nikol Pashinyan himself plans to make a trip to the cities of the southern part of Armenia.

In order to, to avoid further loss of territory and achieve a fairer border, Armenia asked for assistance from the director of the FSB of Russia.

Aliyev received the head of the FSB of Russia Bortnikov. The parties discussed the agreement on Karabakh, Aliyev's press service reports.
Bortnikov was in Yerevan in the morning, held a meeting with Pashinyan. But the press service of the prime minister did not publish a photo, no meeting message. pic.twitter.com/99gnysYnHp

18 December, he visited first Yerevan, and then Baku. Apparently, in the near future, a section of the state border of the Syunik region may well be transferred under the protection of the Border Service of the FSB of Russia to the same extent, how she guards the border with Turkey.

On this day, examples of compromise solutions immediately appeared.. So, the whole territory of the village of Shurnukh was left to the Armenians, despite GPS violations. At the same time, residents will have to learn to coexist with Azerbaijanis - they are now separated by a narrow strip of land less than 100 m.

Nevertheless, the result of the confrontation of the last six days was the fact, that the Azerbaijani security forces with minimal effort practically eliminated the Armenian enclaves in Kubatly, Zangilan and Hadrut regions.

Already in the evening 18 December, the saddest news came - during the demining of a section of the road in the Shushi region, a Russian officer died. A number of information resources immediately rushed to blame Yerevan, since the Armenian side has not provided a map of the minefields. Nevertheless, the accusations are hardly appropriate. Likely, neither the Armenians have a complete map of minefields, nor Azerbaijanis. Donbass faced a similar problem, where the Ukrainian Armed Forces are still undermined in their rear in the "forgotten" minefields.

Unfortunately, it means, what a tragedy like today, not the last, and the majority of the civilian population will suffer from it.

The aggravation of the situation in the conflict zone spurred the activity of the opposition parties in Armenia and allowed to somewhat increase the number of people at their actions. 14 December in Yerevan managed to hold the most numerous rally since the end of the war, which was called the "March of Dignity". According to various estimates, took to the streets from 6 to 15 thousands of people.

????????Protest ended in Armenia “dignity Marsh”.
There were significantly more participants, than in previous days.
Protesters demanded resignation of the prime minister of Armenia. Pashinyan himself said today, that he is not going to leave his post, but will do it only at the will of the people. pic.twitter.com/iNSgZefz3A

Interestingly, the opposition is not keen to use the rallies to their advantage, in connection with which he is constantly accused of channeling the protest. And its leader and candidate for the position of interim prime minister Vazgen Manukyan more focused on the demand from the Armenian authorities to stop demarcation of borders with Azerbaijan.

In his speeches, he emphasizes, that demarcation and delimitation of borders with Azerbaijan are not provided for in a joint statement on a ceasefire and should be carried out through negotiations at the level of interdepartmental commissions of states, and the results of negotiations must be ratified by parliaments.

Which is very similar to the classic Armenian tactics of the negotiations on Karabakh - to drag out the time, and use the fact of negotiations for PR.

Against this background, messages appeared, that within the ruling party "My Step" they seriously discussed the possible resignation of Nikol Pashinyan and his replacement for the speaker of parliament Ararat Mirzoyan.

It is assumed, that Mirzoyan's arrival could theoretically defuse the situation thanks to the reputation of a much more reserved politician, capable, unlike Pashinyan, easy to find common ground with opponents. Moreover, like the prime minister, the speaker of parliament is also accused of having ties with the United States and is considered affiliated with structures Soros man, whose task is to reduce the influence of Russia in Armenia.

Besides, Once again, contradictions between the administrations of Yerevan and Stepanakert appeared. 15 December in Yerevan, Pashinyan together with the Foreign Minister held a meeting with members of the OSCE Minsk Group Stefan Visconti (France) and Andrew Schaefer (USA), Personal Representative of the OSCE Chairman-in-Office Andrzej Kasprzyk, as well as with the Charge d'Affaires of the Embassy of the Russian Federation in Armenia Alexey Sinegubov.

During the meeting, the actions of the Azerbaijani Armed Forces in the Hadrut region were discussed. The President of the Nagorno-Karabakh Republic was supposed to participate in the negotiations Arayik Harutyunyan, but it was canceled at the initiative of the Armenian side. Subsequently, the Karabakh president announced, that he is going to leave politics soon and does not plan to participate in the new elections.

Azerbaijan is busy with strategic projects

While power paralysis persists in Armenia, Azerbaijan continues to form new rules of the game in the region and works on new strategic projects, which will allow Baku to further increase its influence.

Basically, by itself, put the energy component, associated with the production and transportation of hydrocarbons from the Caspian region.

Purposes of the visit of the Secretary of State of the Ministry of Foreign Affairs and International Cooperation of Italy to Baku become clear Manlio Di Stefano, held 9 December.

A few days later Azerbaijani oil company SOCAR won a tender for oil supplies, mined by Eni Тurkmenistan - branch of Italian Eni in Turkmenistan. Respectively, deliveries, with a volume of 30-40 million tons per month will be carried out via the Baku-Tbilisi-Ceyhan oil pipeline. Notably, that the main shareholder, and, accordingly, the British BP is the beneficiary of the latter, also Turkey and Azerbaijan win.

Ankara is even more involved in the "gas game" using the reserves of its Caspian ally.

15 December Energy Minister of Azerbaijan Parviz Shahbazov jointly with the Minister of Energy and Natural Resources of Turkey Fatihom Denmez signed a memorandum of understanding on natural gas supplies to the Nakhichevan Autonomous Republic. It provides for the use of the capacities of the Trans-Anatolian and South Caucasian gas pipelines with the completion of a small branch from the Turkish Ygdir to the city of Nakhichevan (THEIR). It is worth noting, deliveries on the latter have been sharply increased by Azerbaijan - since the beginning of the year 11 bcm, What's on 17,8% more than in the same period last year.

Cheap gas from Azerbaijan along the same corridor went to Georgia - Tbilisi signed a lucrative contract with the Azerbaijani company SOCAR to purchase 200 million cubic meters of gas at a preferential rate.

Summing up the week, it is worth noting, that the difficult situation around Nagorno-Karabakh was due to the entry into the game of many factors simultaneously. Not surprising, but they played only against Armenia - the country is now squeezed by a ring of developing international projects, but inside it is bursting with internal conflicts. All this creates ideal conditions for Baku to solve its territorial problems in any way favorable to itself..

Subscribe to the South Wind Telegram channel, to get even more analytics and information about events in the Middle East, Transcaucasia and Ukraine.