Not a toy, but a brave hunter: features of the Yorkshire Terrier breed, a photo, advantages and disadvantages, recommendations for content 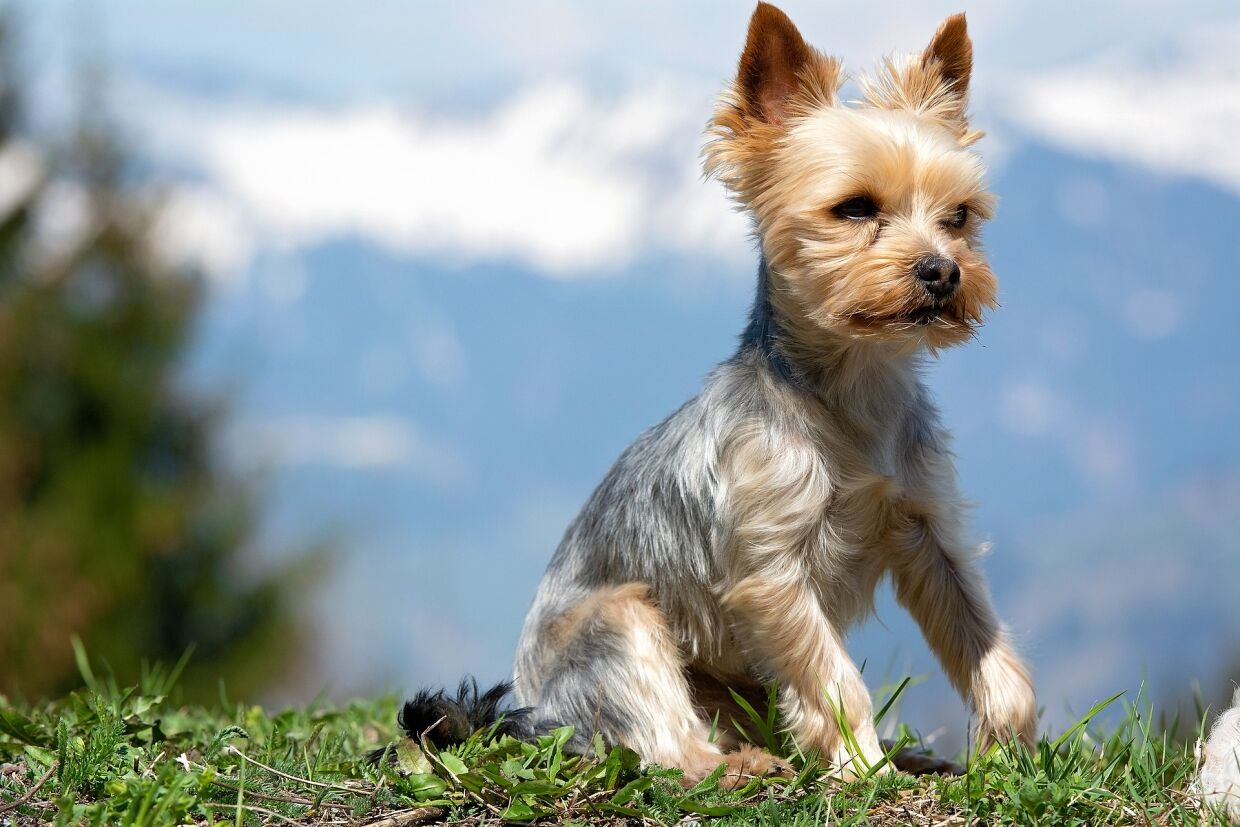 These cute dogs are often called couches.. And their hairstyles are funny ponytails, tied on top, - cannot but cause tenderness. But contrary to popular belief, Yorkshire Terrier dog breed was not bred for that, to pamper secular offspring, touch the ladies and ride in the coat pocket of gentlemen.

York are real hunters, which Scottish weavers trained on mice and rats in the workshops of factories and which protected the fields of peasants from the invasion of rodents. In their character, the nature of a terrier is persistently manifested - an active, tireless, a curious and often fearless companion.

History of the breed

The age of the breed is about 150 years. The Yorkshires were taken out in England, in Yorkshire and Lancashire, to guard fields. In those days, farmers were forbidden to keep large dogs., and small terriers were excellent at helping to cope with rodents and often accompanied their owners on trade trips.

It is believed, that the first representatives of the breed appeared from the crossing of Scottish, Manchester Terriers and Maltese lapdogs. From the first Yorkies inherited courage, tenacity, unlimited devotion to the owner. And from the lapdogs they got luxurious wool, which became the calling card of the breed.

British joke, that the Scottish weavers were so proud of their nimble little helpers, from which no rat could escape, what was made for them so beautiful, silky hair. 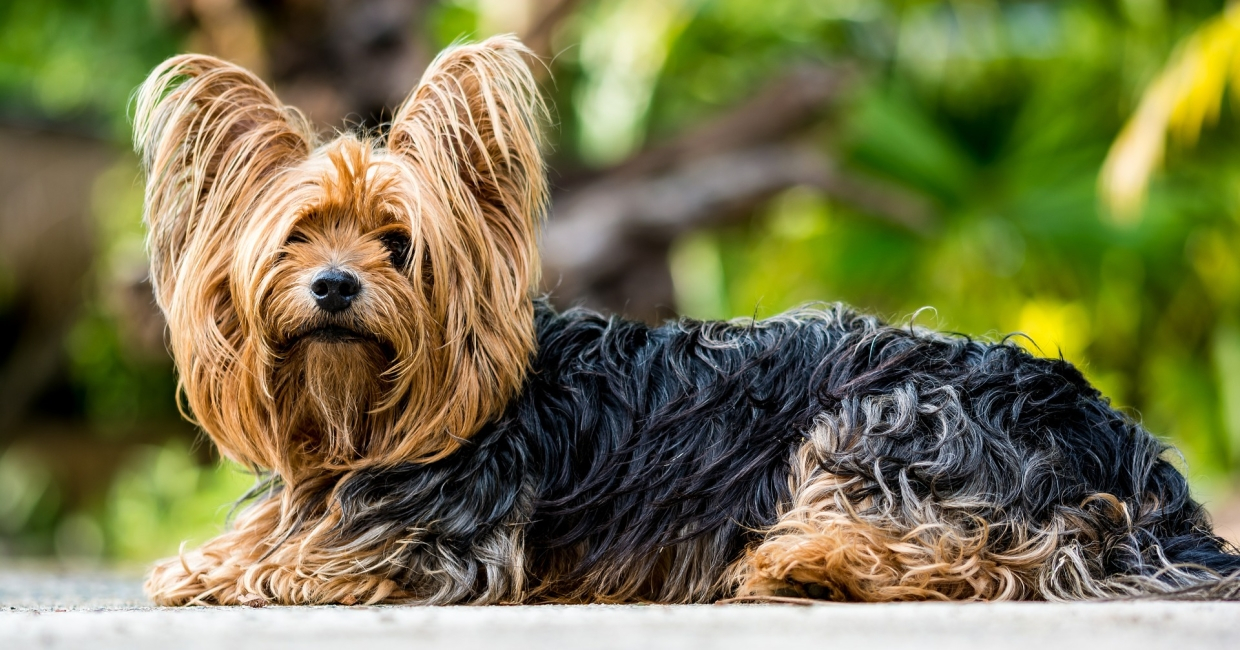 The breed was recognized at the end of the 19th century, and her first club appeared, of course, In Great Britain. The Yorkies arrived in Russia almost 100 years, at 1971 year. The first representative of the breed in our country became the pet of a ballerina Olga Lepeshinskaya, and the first nursery in the Moscow region appeared only in the early 90s.

Since then, Yorkshire Terriers have ceased to be "outlandish" and exotic dogs and gained popularity as representatives of one of the smallest breeds, perfect for keeping in an apartment.

Description of the Yorkshire Terrier breed

These are small dogs with a very strong constitution.. The weight of the Yorkshire Terrier, according to the standard, should not exceed 3,2 kg. There is no minimum limit. However noticed, what, how long Yorkshire terriers live at home, seriously depends not only on care and nutrition, but also from the mass of the pet. The less weight of the dog, the shorter its life span. Therefore, the desire to choose a miniature Yorkie for keeping in an apartment is a tribute to fashion., not common sense. By breed standard, too small representatives are considered a tribal marriage, they are forbidden to be used for knitting, breeding and participation in exhibitions. 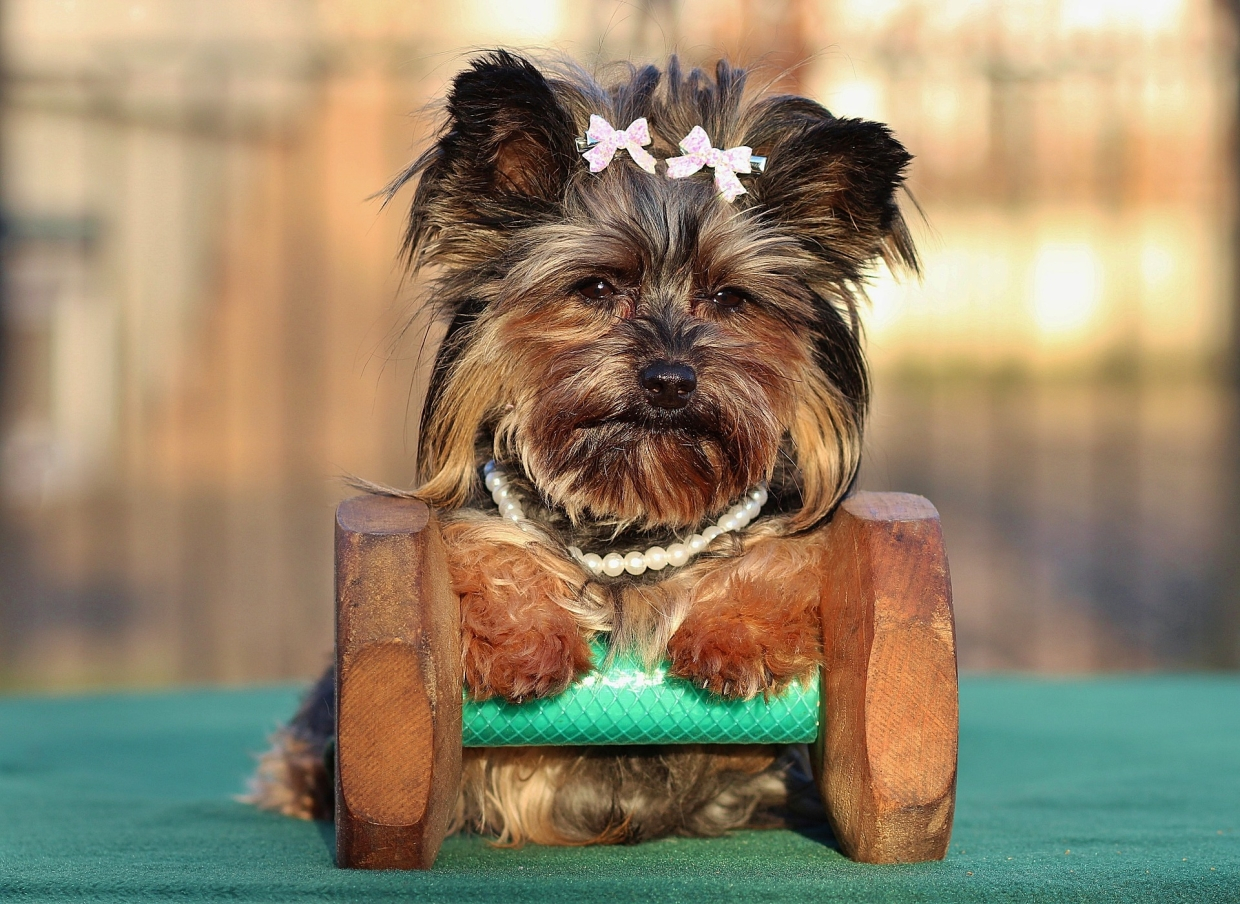 The compactness of Yorkies is complemented by their grace and even some pride of gait.. They have a small head with triangular ears set high., short muzzle, correct bite and dark shiny small eyes. Breeders say, that the dog's gaze is intelligent and alert. And even only by the "expression" of the muzzle, one can distinguish a real Yorkshire Terrier from its "variety" of baby-face.

This is the name of Yorkie dogs with a particularly short muzzle and convex, as if surprised by "children's" eyes. Such kids look, of course, touchingly, but they do not fit into the framework of the standard. Experts give preference to the "classic" structure of the Yorkshire Terrier muzzle, whereas baby-face is considered a marriage.

An absolutely straight back is noticeable in the body structure of a Yorkie., narrow chest and perfectly straight hind legs. The tail used to be docked, but today the right to shorten it or leave it as it is, at the discretion of the breeder. Therefore, more and more Yorkies appear with medium ponytails., which are usually raised to the same level with the back line and end with a funny tassel. 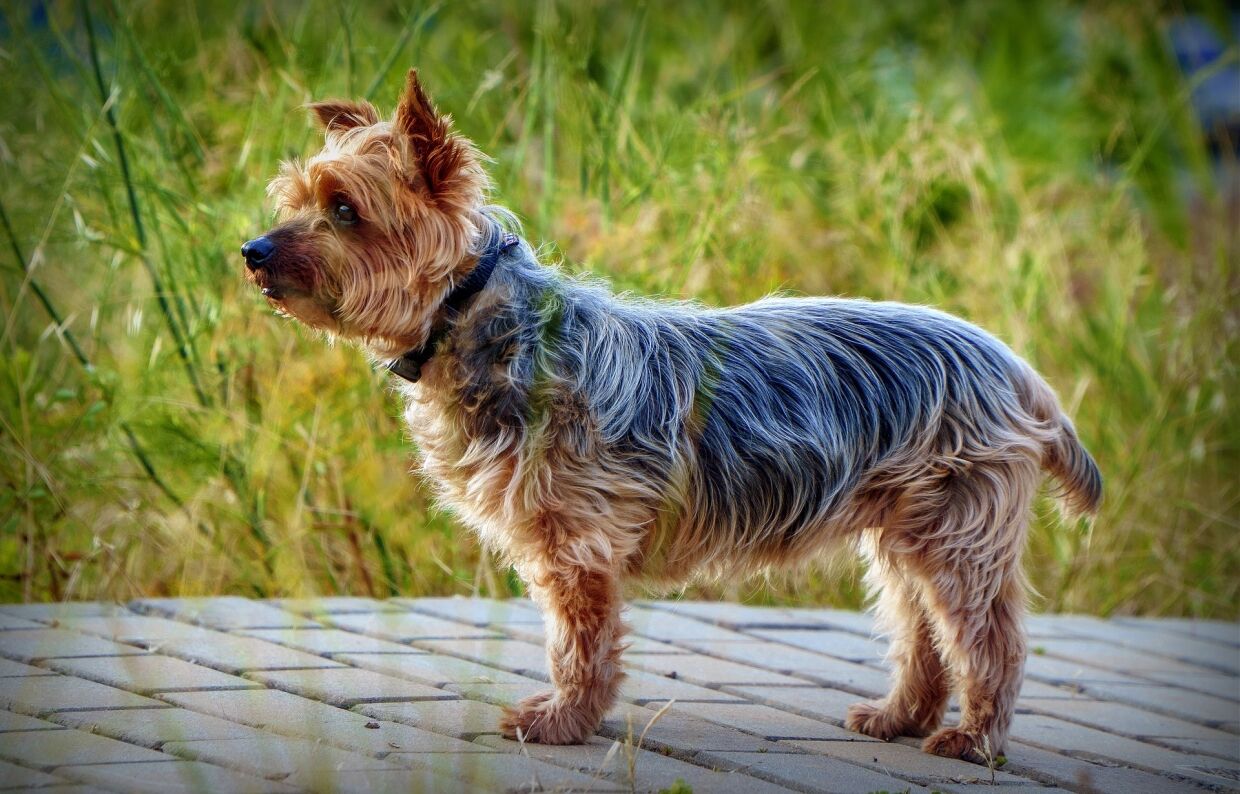 The color and quality of wool is one of the main indicators of compliance with the breed standard. Yorkshire terrier puppies are born completely black, with a few "tan" spots on the face, hind legs, chest and under the tail. Over time, the color begins to change, but understand, what exactly will he become, almost impossible. Although breeders initially “cull” puppies, which were born without characteristic tan specks. Expect, that the color of such babies will meet the standard, not accepted.

As the dog gets older, its coat brightens. In a professional environment, a change in color is called overflow.. It starts from the head: the place of black or brown fur is occupied by golden-bronze. More and more steel color appears on the neck and back. Gradually, no black spots remain on the head at all, and the body acquires a characteristic dark, steel bluish color. There should not be any blotches of other shades: the coat shimmers only with transitions from dark to light. The color change can last long enough, usually Yorkshire terriers acquire their "finished" color by two or three years.

The quality of wool also changes. In puppies it can be fluffy, but by adulthood it should become absolutely even throughout the body and silky. celebrated, what do dogs have, in color which are dominated by light colors, coat quality is usually better, than the dark. This does not apply to the Yorkshire Terrier Biver.. Black and white kids were bred in Germany a little more 30 years ago, and the breed standard was approved only in 2007 year. Their color may be more original: with a transition from golden to black, with a luxurious white breast. 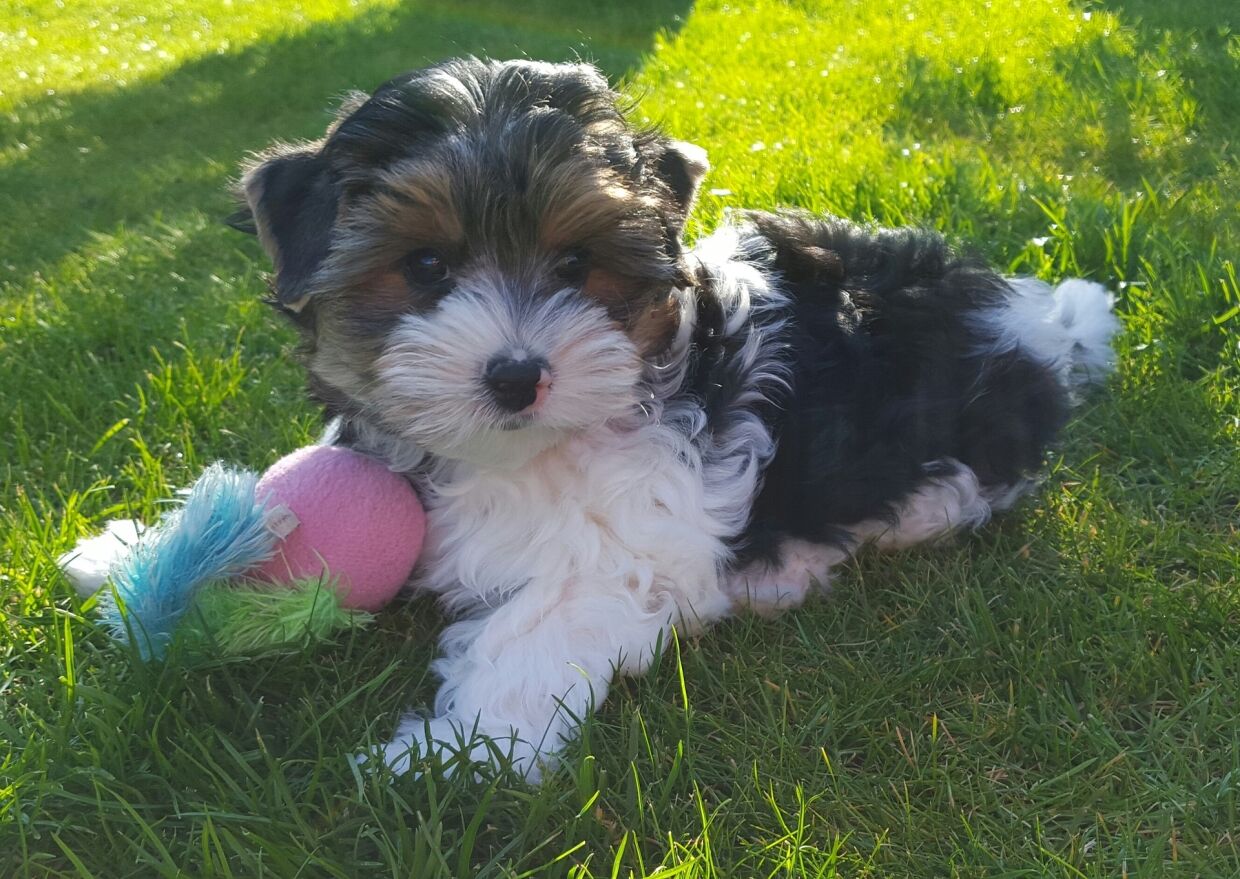 The coat of these dogs is often compared to human hair.. But the similarity is not at all in the structure of the hairs., and in that, that wool grows, like hair, permanently and falls out only when scratching or damaged. Yorkshires have no undercoat, which means there is no molting period. On the one hand, it's wonderful, as it becomes the solution for people with animal hair allergies. Besides, the pet will not leave hair everywhere in the apartment, on carpets and sofas, which means there will be less cleaning.

But on the other hand, it imposes certain responsibilities on the owners.. York, unlike most other dogs, need to cut, and do it regularly. Only dogs are not cut, who participate in exhibitions. Their body turns out to be completely overgrown with wool, from head to toe. She soft cascades down the body to the floor, and the longest "curls" grow, as it should be, on goals.

For most Yorkie owners, such beauty is not required.. If a dog is brought up simply as a pet without claims to the exhibition future, she needs to be cut. They do this every two to three months.. Haircuts are chosen at the discretion of the owner. Usually less hair is left on the body, while funny "cheeks" are cut on the face, bangs are left on the head, tied in a cute ponytail. 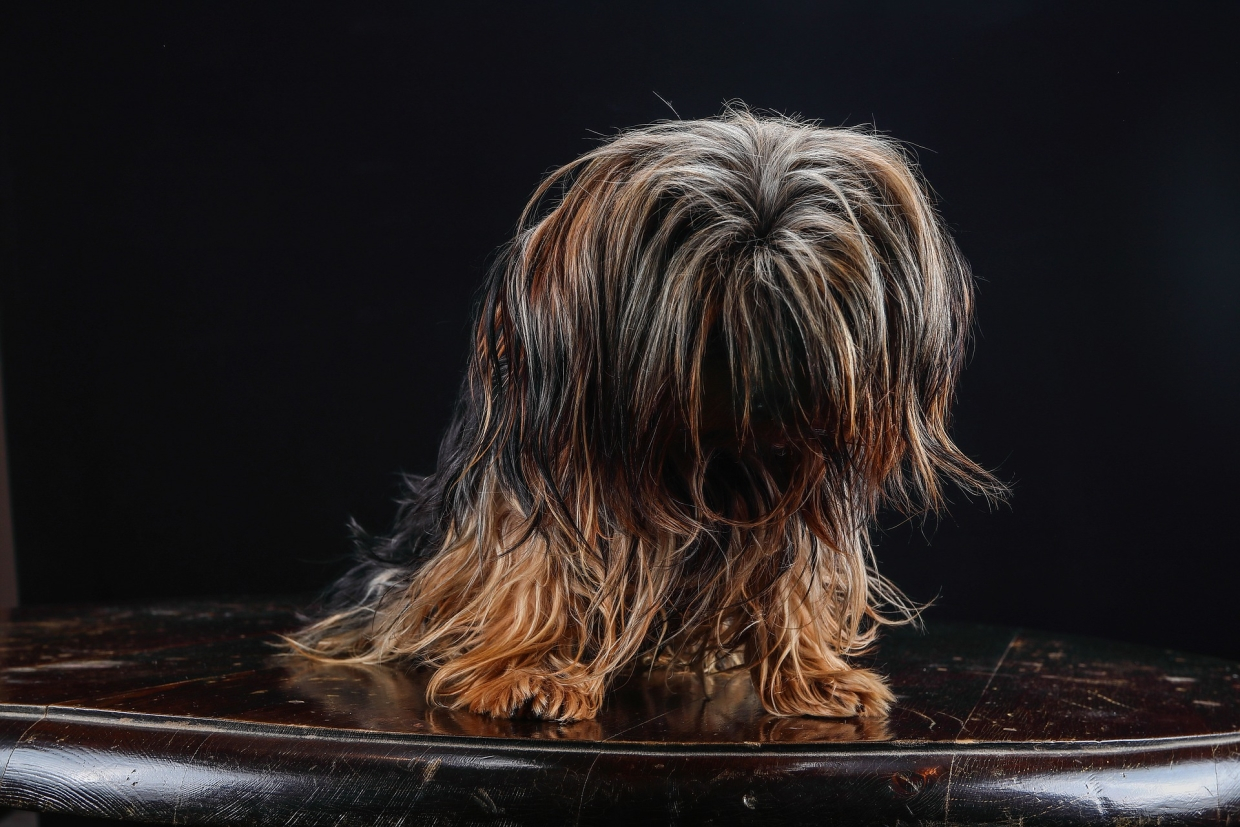 The character of York

Pretty, graceful and often touching appearance contrasts sharply with the character of this dog. She is not at all ready to be a "couch resident", although it does not need serious physical activity. Yorkshires are curious and inquisitive, perky and active. Show stubbornness and independence at times, but because, starting this dog, be sure to devote time to her education and training. Otherwise, if you do not deny her anything and indulge any "whims", a Yorkie as a true terrier can consider himself a "pack leader" and become completely uncontrollable.

Dogs are usually so attached to their owner., that they are ready to follow him literally on his heels and accompany him everywhere. They are quite hardy and unpretentious., if the owner is nearby. Ready to play and run outside, and therefore will be good companions in families with children. However, to have a puppy in the house, where there are kids up to six years old, not worth it. Yorkies are fragile, and children do not miss the opportunity to "cuddle" them. Hugging too much can injure the puppy. 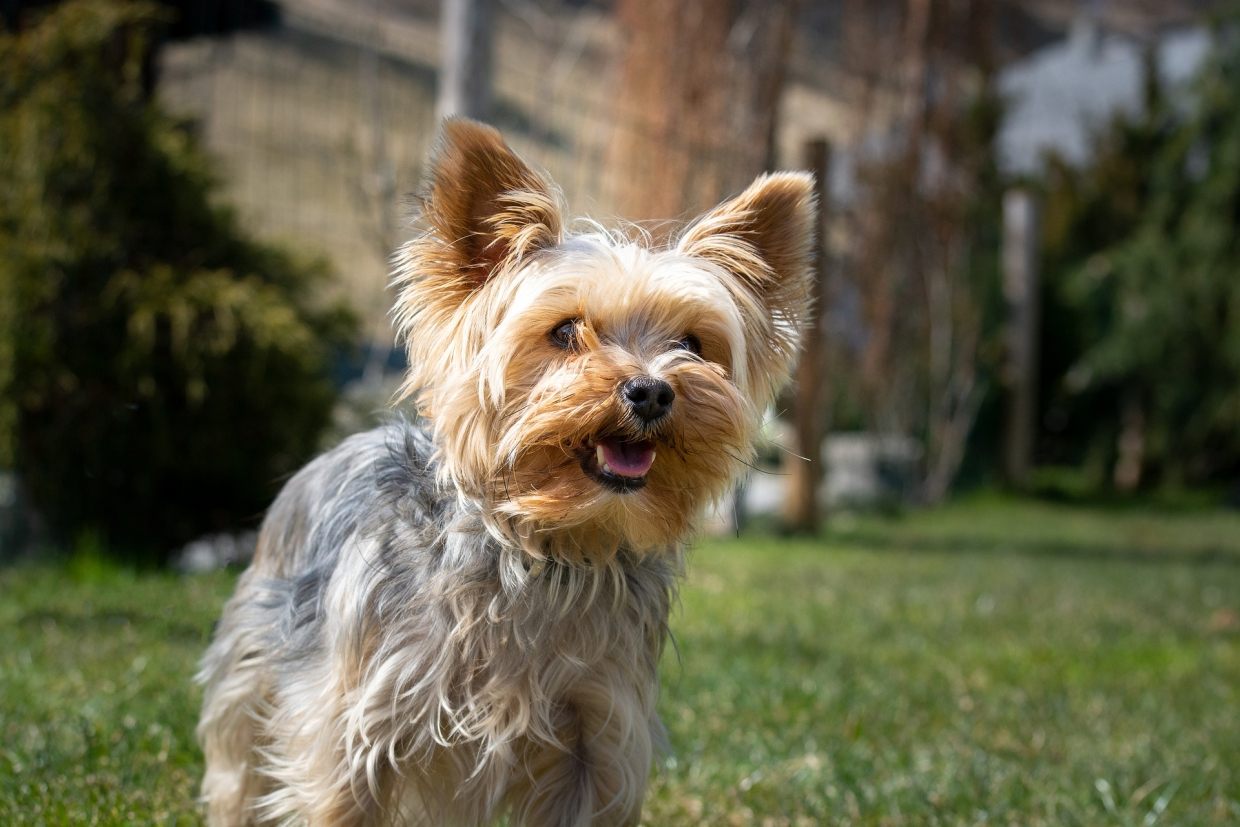 Pros and cons of Yorkshire Terrier

The advantages of the breed include compactness., thanks to which the dog can be kept even in a small apartment. And decorativeness: yorkies are cute and cute, and the features of wool allow you to experiment with plenty of both hairstyles, so with pet decorations.

They have excellent health., and with proper care they live up to 14-16 years. They have almost no specific breed diseases, apart from possible joint problems. They arise, if the puppy jumps off high surfaces. Therefore, before 10 months, the dog should not be allowed to jump off the sofa itself and even more so put it on tables and pedestals, as the pet can be injured when jumping.

These dogs are great for humans., who cannot afford long walks. Walk them, of course, necessary, but just one hour on the street every day will be enough, to make your pet feel good.

Yorkshires also have disadvantages. And it's important to take them into account, planning to buy a puppy. 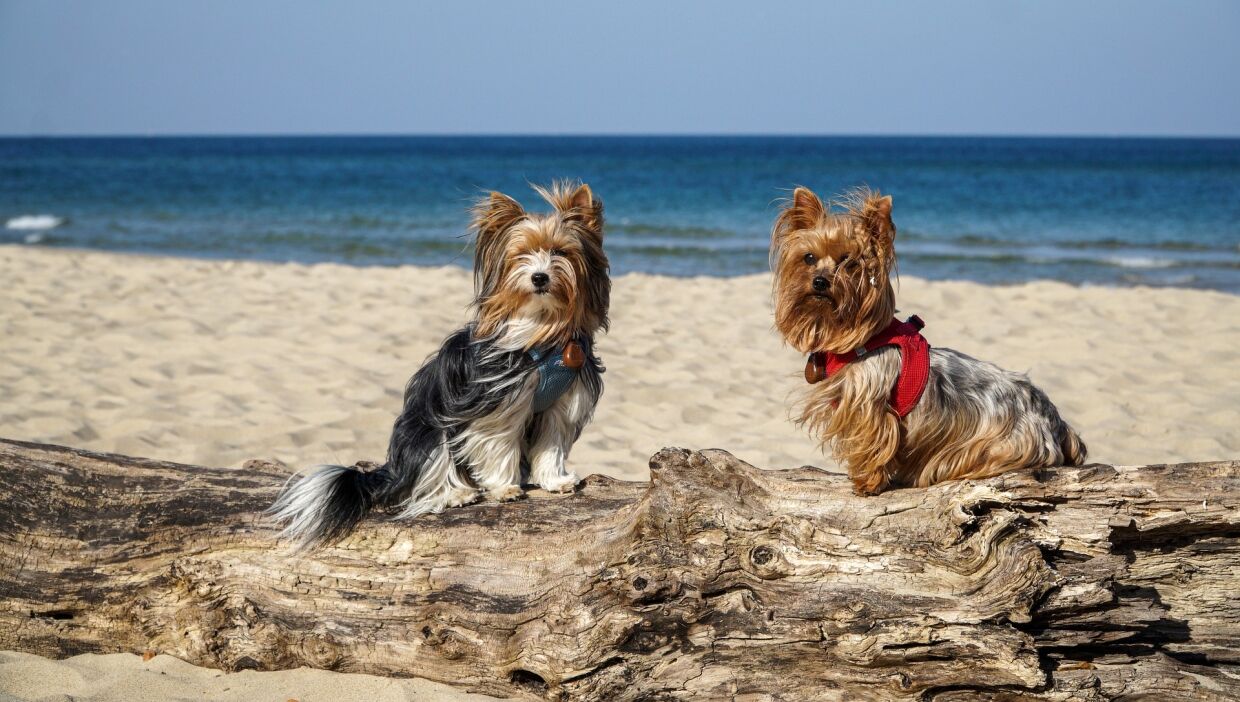 Is it worth getting a Yorkshire Terrier

A dog of this breed will be a good companion for an elderly person., will brighten up his loneliness and allow him to go out more often. But if regular walks are a burden, accustomed toddler can walk in the tray in the apartment.

Often middle-aged women choose Yorkshires, whose children have already grown, but there are no grandchildren yet. The pet becomes another child, requiring care and attention. And the ability to buy hair clips for him, rubber bands, beautiful jumpsuits for the winter, do hairstyles and occasionally take a haircut, captivates and addicts.

The cute baby is also suitable for families with children over six years old and teenagers. The unpretentiousness and excellent health of Yorkies makes them an almost problem-free first dog.. But it's important to remember, what are these dogs, rather, prefer adult society, than a child. Therefore, it is hardly worth expecting fun games for children with a pet.. 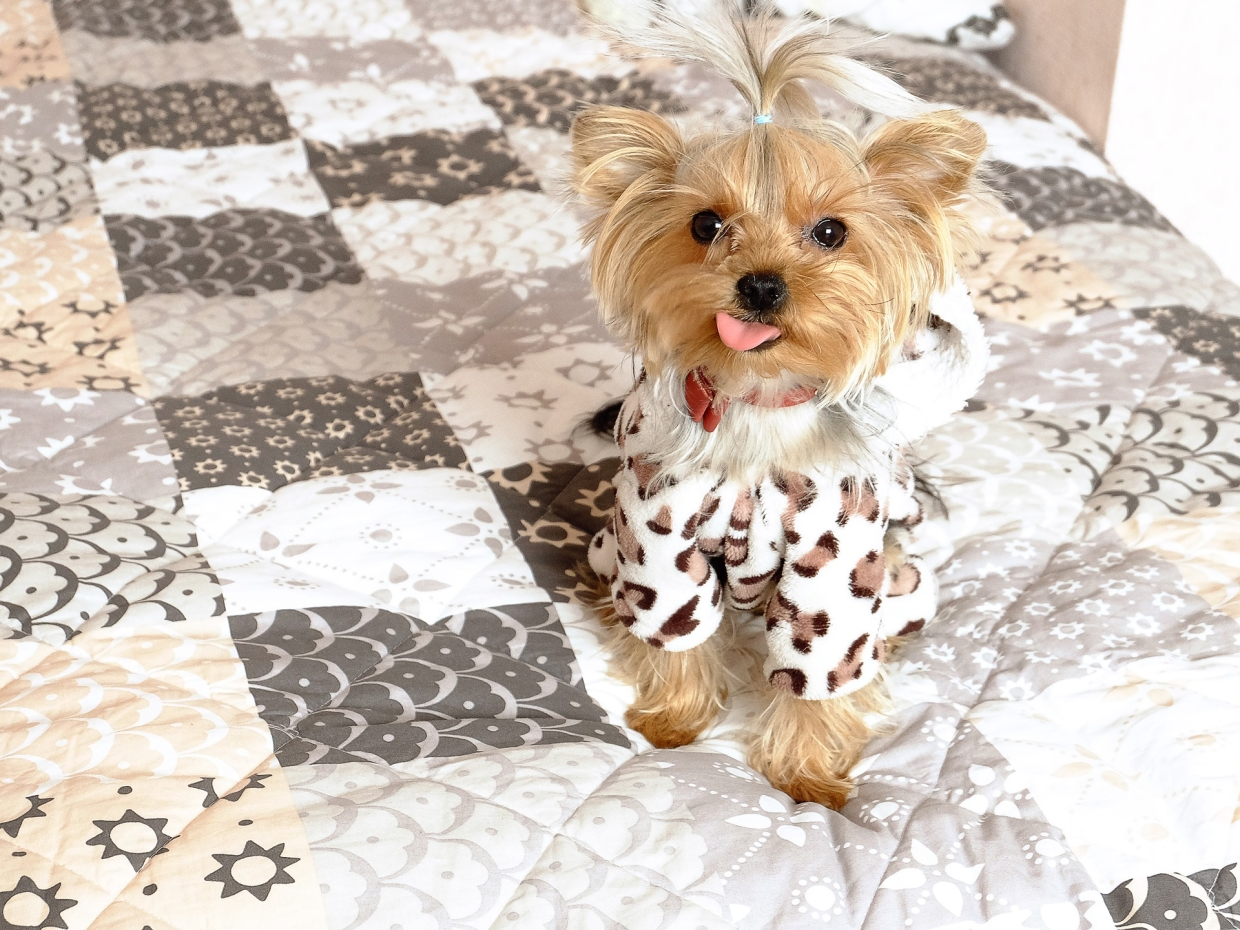 How much is a Yorkshire terrier puppy

Dogs of this breed have become very popular in Russia.. More than 70 nurseries, who specialize in breeding Yorkies. The puppy can be bought as in the kennel, and "off hand", and prices will vary greatly.

The price tag for babies from the nursery can "bite", starts from 25 thousand rubles and can go up to 70 thousand. Private traders sell puppies cheaper - 7-14 thousand. Choosing a pet, pay attention to its color, since deviations from the standard speak not so much about the decorative qualities of the dog, how much about possible future health problems. Look for a puppy with documents, since the presence of a pedigree confirms, what's in front of you, really, york, not a cross of an unknown breed. 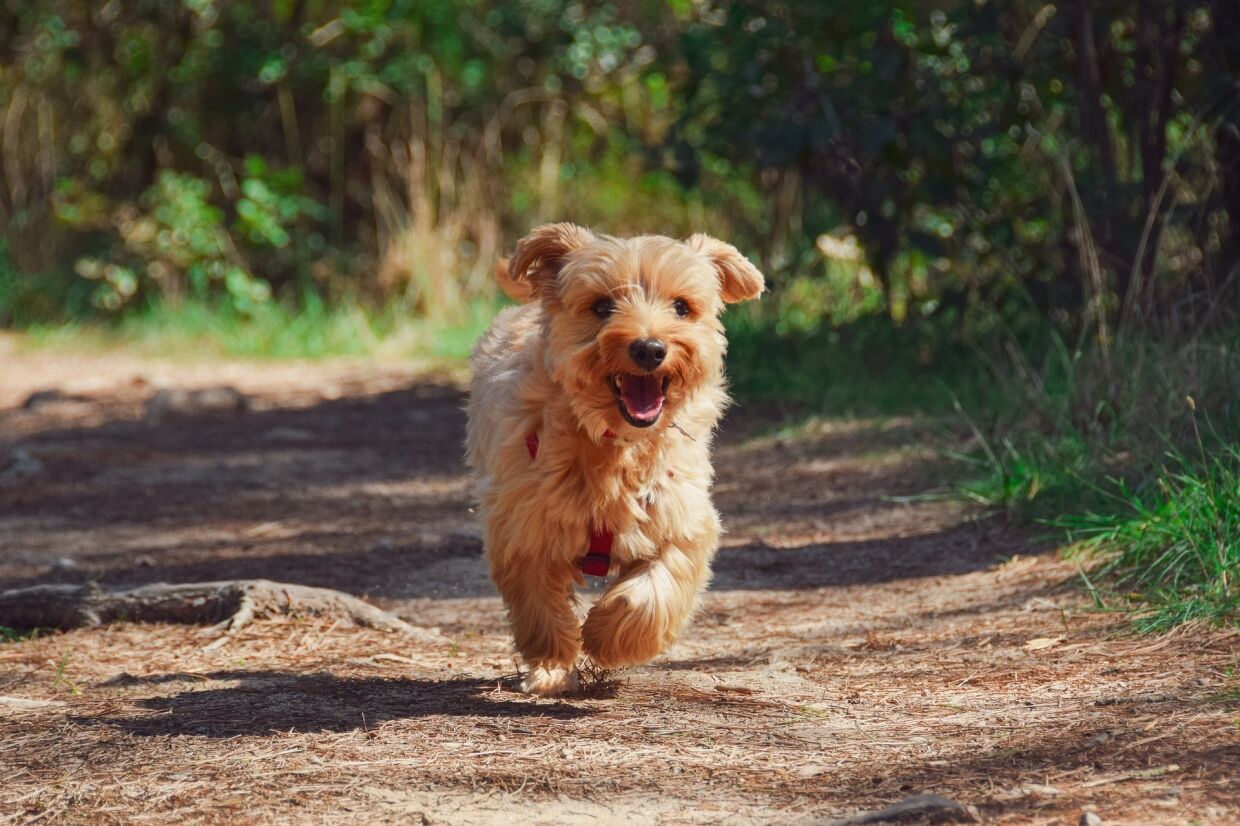 The British origin of the dog gives it the full right to bear a foreign name.. But you should not focus on aristocratic and noble nicknames. Yorkshire is a hard worker after all, hunter and assistant, and therefore the nicknames for the boys of the Yorkshire Terrier will be more appropriate. Bard, Vince, Jason, Lucky, Mini, Poof, Roger, Smart, Thais, Chuck, Harvey - set of options, appropriate to the nature and characteristics of the breed.

Nicknames for girls Yorkshire terrier can be much more cute and gentle. After all, these creatures do not have such a cool disposition., like boys. Therefore, the nicknames Bonya will suit them., Busya, Zaya, honey, Toffee, Lyalya, Fairy, Fifa, uncle, Foot, Tiffany, Eva. 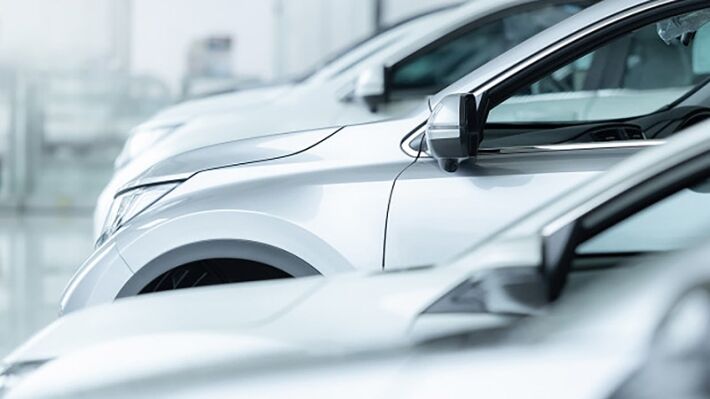