Pashinyan did not surrender to Aliyev, but to Putin 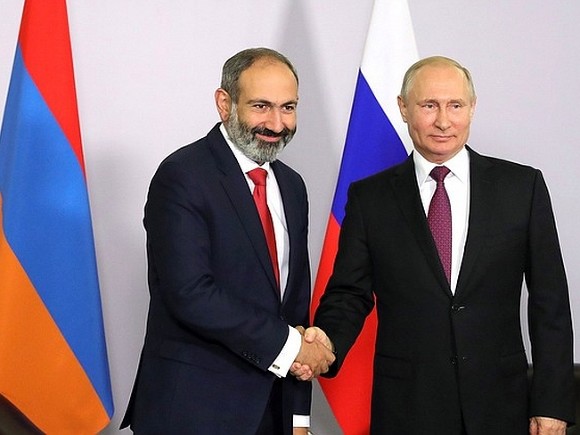 Within a few days after Armenia's surrender in the Karabakh war, the situation in and around the region, it seemed, was extremely simple. Therefore, the request of the US State Department and the French Foreign Ministry, for Moscow to clarify the role of Turkey in the Karabakh settlement, at first caused some bewilderment not only among the head of the Russian Foreign Ministry Sergei Lavrov, but also the author of these lines. kind of, everything is clear.

Armenia and its ally Russia - lost, Azerbaijan and Turkey behind it won. An additional contingent of Russian military, numbering about two thousand people, is being introduced to Armenia. Azerbaijan also includes Turkish "peacekeepers"

Armenian Prime Minister Nikol Pashinyan after signing "shameful" with the mediation of Russia, according to some in his country, cessation of hostilities agreements with Azerbaijan, judging by what is happening, is not going to leave his post. Enlisting the support of the Kremlin, he, roll up your sleeves, took on the transformation of Armenia, previously dependent on Moscow, into a full-fledged Russian protectorate. Armenian-Russian relations will remain allied and will continue to be strategic in nature, Pashinyan said at a meeting with deputies of the ruling "My Step" faction, held in the country's parliament.

Here the question arises about, did Armenia have any other options after the defeat?. Before the war, can, and were, and now - no. No frustration, no "soros" on the Armenian land! It is no coincidence that one of the first steps of Yerevan after losing the war will be the abolition of restrictions on the broadcasting of Russian TV channels in Armenia., performing for a long time as in Russia, and in the Near Abroad, the tasks of a "collective agitator and propagandist" for the "Russian world", and in fact, which are the drive belts of the Kremlin administration.

Before the war, Armenia tried to fence itself off from these tools of information war, but now we see her turn on 180 degrees. The Kremlin continues to believe in the power of the "correct" television picture and that, that through the efforts of propagandists one can endlessly manipulate the minds of millions.

Besides, there is no doubt, that after some time the Armenians will have to buy gas from Gazprom at the wrong prices, which seem fair and realistic to them. Reality in their country will no longer be determined by them. let us say, if after a while Armenia wants to reduce its dependence on Russian gas by increasing its purchases from Iran, Moscow will immediately make it clear, what is willfulness is impermissible.

Armenia following the results of the Karabakh war 2020 year actually fell into colonial dependence. true, not from the winner (Azerbaijan or Turkey behind it), but from the country, with which she had formal allied relations, but which, Nevertheless, threw her at the most difficult moment.

Pashinyan humbly pokes his head into the Kremlin's information collar. Before (immediately after signing the agreement from 9 November) he launched an additional contingent of Russian "peacekeepers" into his country. The quotes in this case are for the reason, that over the past three decades, the Russian military have never performed their own peacekeeping functions anywhere, that is, the separation of the parties and the impartial security of each of them. conversely, in every country, in which they appeared - whether it was the former Yugoslavia, Moldova or Georgia, they were always on someone specific (pro-Moscow) side.

New contingents of the Russian army in Armenia will again defend not so much of it, how many are the interests of the Kremlin and its oligarchs. That is, do exactly the same, what did the Russian military do in Armenia before (Russian base in Gyumri).

the situation, when the guarantor of the existence of one country is a neighboring state, having just shamefully thrown her ally at a difficult time for her, could be called funny, but the Armenians are definitely not laughing now. Because the loss of military and information security, as well as an even greater increase in economic dependence on Moscow, means the loss of Armenia and its political subjectivity.

With my hand on my heart, it should be recognized, that even before this war Armenia was largely dependent on Russia. The only thing, what made Yerevan a more or less independent player in the South Caucasus, had an idea of ​​the strength of the Armenian armed forces. This performance (as we see now, erroneous) for a long time was divided not only by Armenian, but also by Russian military experts.

However, the war put everything in its place. AT 2020 the army of the XX century (armenian) suffered a crushing defeat at the hands of the 21st century army (Azerbaijani).

You can't envy Armenia now. She was caught like chickens - her fate is in the hands of the Kremlin. Can, of course, it was to surrender to the mercy of Azerbaijan and Turkey, but it is clear, that such an option was not even considered in Yerevan.

Kremlin propagandists, of course, now they are vying with each other, that Russia has benefited from this whole story. But what is her gain? In, that Armenia, in addition to the small Russian military contingent (4-5 thousand people at the base in Gyumri), long ago hosted in this country, two thousand more will be added? And this is against the background of a hundred thousandth Azerbaijani army armed with the latest weapons and at any moment ready to come to the aid of the armed forces of the Turkish Republic. (more 740 thousand military, and this is without reservists).

Recall, that Armenia does not have a common border with Russia. It means, what reinforcements, as in the just-ended war for Karabakh, if you have to send anything by air. That is another perspective, considering what Azerbaijani and Israeli-made drones were doing in the skies over Karabakh in October-November. Don't forget the fact, that the Turkish Air Force, the strength of which Russian pilots felt in Syria, were not involved in the current war in Karabakh.

Thus, the presence of Russian troops in Armenia, as before, remains symbolic. And here is the entry of the Turkish military (in fact, the same conventional "peacekeepers") to the territory of the former republic of the Soviet Union - Azerbaijan, that is, into the "zone of influence" of Moscow, - net defeat of the latter.

Let's repeat, all this was obvious even to such representatives of the "Russian world", as former defense minister of the self-proclaimed DPR Igor Strelkov, who declared, that Vladimir Putin sold "an official ally so straightforwardly, that no one could have expected such frankness from Him ".

but, when 17 November, Putin clarified his position on the Karabakh settlement, it became clear, that the request of the American State Department and the French Foreign Ministry was fully justified. All, is, not over yet, a, perhaps, just beginning.

Answering media questions about Turkey's role, Putin, in particular, reminded, that "even Armenia did not recognize the independence of Karabakh". therefore, from the point of view of international law, Azerbaijan returned territories, which he, and the entire world community "considered Azerbaijani territory". Emphasizing, that "Azerbaijan is an independent sovereign state", Putin admitted, that he “has the right to choose his allies so, as he sees fit ". Wherein, According to him, "You can give any assessment to Turkey's actions, but it is difficult to accuse Turkey of violating international law ".

But it's not that simple: “I still, it seems, managed to convince our Turkish partners, and our colleagues in Azerbaijan, that it is not necessary to create conditions or prerequisites for the destruction of our agreements, such conditions, which would provoke one of the contracting parties to take some extreme measures and extreme actions ".

Explaining, what is this about, Putin said: “I mean the very difficult legacy of the past and that, what is associated with tragic, bloody events of the First World War, with genocide. This factor, which can be recognized, need not admit, someone admits, and someone in the world does not recognize. There are no problems here for Russia, we recognized it all long ago. But why provoke the Armenian side by the presence of Turkish soldiers on the contact line?? I think, that President Erdogan understood and understood this perfectly well ".

And here's another extremely curious statement: “... We have agreed on, that Turkey, at the request of Azerbaijan, will take part in monitoring compliance with the ceasefire. We will do it together with Turkey, I mean, that we have a very good experience of interaction in the Middle East, including in Syria ... ". Interesting, what did the Russian president mean, talking about "very good experience" of interaction with Turkey in Syria. Defeat in late February - early March 2020 Erdogan's army of the Syrian-Russian group in Idlib?

so, if you try to extract from a large number of contradictory statements by Putin, what happens? From the point of view of international law, says the Russian leader, Azerbaijan could have used force, returning their territories. Being a sovereign country, he also has the right to "choose any ally". Turkey "difficult to accuse of violating international law", “But why provoke the Armenian side by the presence of Turkish soldiers on the line of contact?».

Note, that the public statement by the head of a foreign state of the recognition of the Armenian genocide at the beginning of the 20th century, in modern Turkey is considered as an outright slap in the face and a challenge. Hint, that the deployment of Turkish peacekeepers in Azerbaijan (remark, not on Armenian territory) can "provoke the Armenian side" for something - pulls a message. It's just not very clear yet - to whom? Strelkov and all "patriots" who are very disappointed with Putin's position on Armenia? allegedly, do not think - if we show these Turks! If so, then this is another bluff, designed not to lose supporters from among the most active adherents of the idea of ​​the "Russian world". The only problem is, that you can't fool them on the chaff ...

If this is a warning message to Erdogan personally, then it can only mean that, that Moscow is ready for a direct armed clash with the Turkish-Azerbaijani alliance. here, true, do not forget, that Turkey is a NATO member, and the fifth article of the charter of this alliance has not been canceled. Furthermore, Donald Trump's White House is about to be replaced by Joe Biden - a much more consistent supporter of US allied commitments.

Is Putin really ready for such a war - the question, to which now hardly anyone has an exact answer. On the other hand, and what can he offer his electorate on the eve of the upcoming 2021 year of elections to the State Duma amid a pandemic, which sets new records every day, and the continuously deteriorating financial situation of Russians? A big war with NATO countries with more than unclear prospects? Doubtful idea ...