The absurdities of a Japanese professor 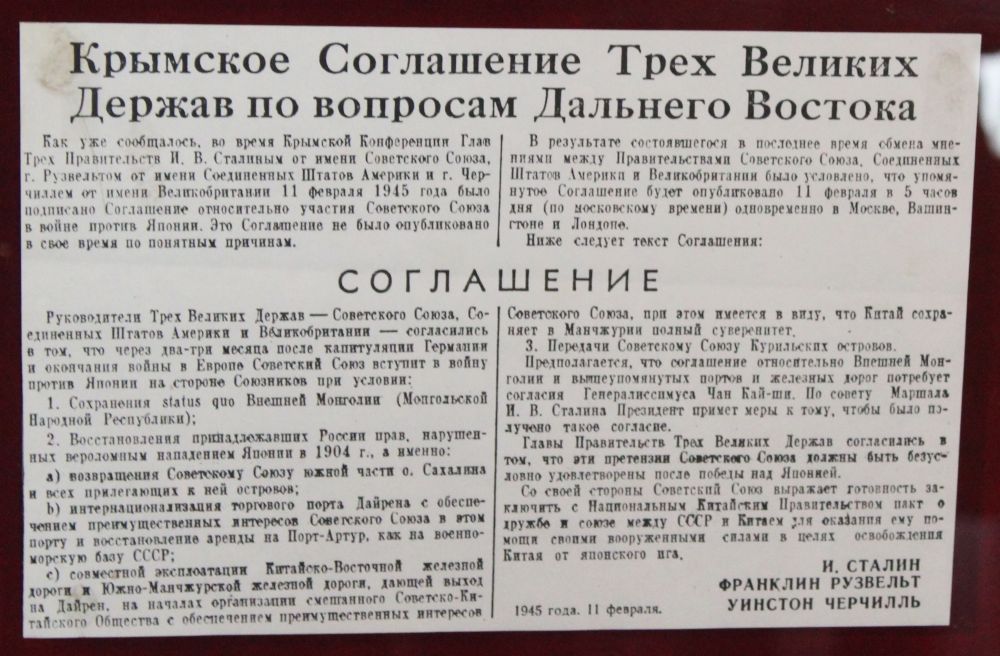 Roosevelt: “The Russians want to return that, what was taken away from them "

The media reported about the publication of Yuma Chefu, a professor at Waseda University of Japan, in which, with reference to "declassified documents", it is approved, that Japan allegedly lost the southern Kuril Islands as a result of the activities of Alger Hiss, an adviser to the US President Theodore, who worked for the Russians (?!) Roosevelt.

The original article and even a link to it could not be found on the Japanese Internet.. There are no other works of the author with the last name, not sounding Japanese. Therefore, we have to comment on the publication in the "Military Review" ("The Japanese professor has designated the" culprit "in the loss of the Kuril Islands"). Only unpleasant, that the editorial staff of the portal impermissibly confused Franklin Roosevelt with Theodore Roosevelt; it's like confusing I.V.. Stalin with Nicholas II.

so, according to the "Military Review", Japanese professor claims, what Hiss "Deceived the head of the United States and transferred the territory of Japan to the Soviet Union". The meaning of "discovery" is, that Hiss, who accompanied President Roosevelt on his trip to the Yalta Conference as a State Department adviser, was "Stalin's agent and not only conveyed the most important information to the Soviet leader, but also lobbied the interests of the Soviet Union before his own patron ".

Next we read: "Referring to it is not clear what" documents " (the exact sources are not indicated in any publication on this topic), the professor is trying to prove, that in the American "top" there allegedly existed an "alternative" opinion about the fate of the islands - the Soviet Union, in accordance with it, should have withdrawn only the Northern Kuriles, and the South - to stay with Japan ". And supposedly it was Hiss who ultimately convinced the president "Give the Russians all the islands entirely". At the same time, the author of the article in "Military Review" rightly notes, that Yuma Chefu has no evidence of his version.

Instead of evidence, Yuma Chefu cites well-known information about, that Hiss during McCarthyism was accused of "communist past" and "espionage for the USSR" (American diplomat denied accusations and sued for libel, declaring his innocence until his death).

Let me tell the readers, how I see this problem. Namely: how Roosevelt felt about Stalin's claims to the Sakhalin island and all the Kuril Islands lost by the Russian Empire.

Let's start off with, that Roosevelt put before Stalin the question of Soviet assistance in the war with Japan the day after the treacherous attack by Japanese naval aviation on the main base of the US Navy in the Pacific - Pearl Harbor. At this time, Hitler's troops were near Moscow and for Stalin to open in such a situation a "second front" in the Far East would be the height of strategic illiteracy. Having received a polite refusal from Stalin with explanations, that it is not possible for the USSR to talk about participation in the war against Japan before the victory over Germany, Roosevelt said, what is he about this decision (Stalin) regrets, but in the place of the Soviet Union would have done the same.

Yet throughout World War II and Franklin Roosevelt, and Winston Churchill used every opportunity to get Stalin to agree to help the Anglo-Americans defeat Japan. Those who wish to get acquainted with this topic in detail, I can refer to my book "Stalin's Japanese trump card" ("Eksmo", 2019).

For the first time, a conversation between the heads of the allied states in the anti-Hitler coalition about the possible results of the defeat of Japan to restore the territorial rights of the USSR in the Far East was held at the Tehran conference in November-December 1943 of the year. The leaders of the Western powers took the initiative. Churchill began by proposing, "For the Soviet fleet to sail freely in all seas and oceans". Answering Stalin's question, what can be done for Russia in the Far East, Roosevelt proposed turning Dairen into a free port. Stalin, seeing, that the USSR was actually locked up by the Japanese in the Far East, posted, what "Port Arthur is more suitable as a naval base". As if summing up the preliminary discussion, Churchill stated, what “It is quite obvious that, that Russia should have access to warm seas ". I remember, that as a result of the defeat in the Japanese-Russian War 1904-1905 gg. Russia lost part of its territory in the Far East, Churchill noted, what “The governance of the world should be concentrated in the hands of states, who are completely satisfied and have no complaints ".

Finally, the conditions for the participation of the Soviet Union in the war against Japan were formulated and enshrined in the Crimean (Yalta) conferences of heads of government of the USSR, US and UK. Preparing for the Yalta Conference, US Ambassador to Moscow Averell Harriman at a meeting with Stalin 14 December 1944 g. reported, that the president asked him to put political questions before Marshal Stalin, related to the Far East. Stalin replied, that the Soviet Union would like to receive South Sakhalin, that is, return something, what was transferred to Japan under the Portsmouth Treaty, and also get the Kuril Islands. The Soviet government never gave up these lands, considering them Russian by the right of pioneering and development. This was directly stated to the Japanese government in the pre-war period.; Sooner or later, believed Stalin, these territories must be returned to the Soviet Union and included in its composition.

The episode is characteristic, quoted by the famous Soviet writer Konstantin Simonov. he wrote: “When in the late 30s it was decided to build an ocean-going navy in the Far East, First Deputy People's Commissar of the USSR Navy I.S.. Isakov expressed to Stalin his bewilderment about this government decision, considering it pointless, since Japan, owning the southern part of Sakhalin Island, blocks all exits of this fleet to the ocean. Stalin calmly noticed: “Wait, will you and South Sakhalin”».

All this was taken into account, when Stalin, in a conversation with Harriman, formulated the wishes of the Soviet government in connection with the participation of the USSR in the war against Japan. During this meeting, the political conditions for the entry of the USSR into the war were outlined by Stalin most fully and formed the basis for negotiations in Yalta on the Far East issue.. Let's give more details on the content of the conversation.:

Stalin says, that he is ready to convey to Harriman the wishes of the Soviet Union. Soviet Union would like to get South Sakhalin, that is, return something, what was transferred to Japan under the Portsmouth Treaty, and also get the Kuril Islands. Besides, in Tehran, the President, on his own initiative, raised the issue of giving the Soviet Union access to the warm seas in the Far East ... "

Stalin's proposals were considered by American specialists from the State Department, among which was, apparently, and Hiss. Unwilling to recognize the rights of Russia and the USSR to South Sakhalin and the Kuril Islands, State Department officials developed materials for the president, in which it was proposed to transfer after the war South Sakhalin and the Kuriles to international custody. However, Roosevelt showed no interest in this proposal.. He brushed it off, seeing, that "They didn't bother him with trifles". Roosevelt did not consider the conditions put forward by Stalin excessive. It is a well-known statement by the American President that, that he "The proposal from the Soviet ally seems reasonable". "Russian, – Roosevelt said, - want to return something, what was taken away from them ".

Roosevelt did not want to be distracted by "trifles", considering the involvement of the USSR in the war against Japan as one of the main goals of the upcoming meeting of the "big three". To top 1945 g. Japan possessed for the defense of the metropolis, Korea and the occupied territories in China with significant manpower, more than 7 million. human, including 6 million. people in the ground forces and aviation, and was in service 10 thousand. aircraft and about 500 warships. And the USA and Great Britain kept in the Pacific and Indian Oceans and in Southeast Asia only 1,8 million. military personnel and 5 thousand. aircraft. Such a balance of forces excluded the possibility of a quick victory over Japan by the forces of the Western powers, even if the Anglo-American troops were transferred from Europe..

The participation of the Soviet Union in the war became highly necessary for the United States and Great Britain.. The American command was seriously concerned about the prospect of the transfer of troops to the Japanese islands from Manchuria and China to repel the allied landing. The Kwantung Army was of particular concern (army group), which US military intelligence regarded as a "large and dangerous force". AT 1944 g. General Douglas MacArthur, Commander of American Forces in the Far East, said, what you need at least 60 Soviet divisions, to smash Japan. In the memorandum of the Joint Chiefs of Staff to the President of the United States from 23 December 1944 years emphasized: "Russia's entry into the war as soon as possible is essential to provide maximum support for our operations in the Pacific.".

In Yalta, President Roosevelt participated in solving the most important strategic issues of war and peace. And to present his decisions as inspired by some State Department official "on the instructions of Stalin" is ridiculous.