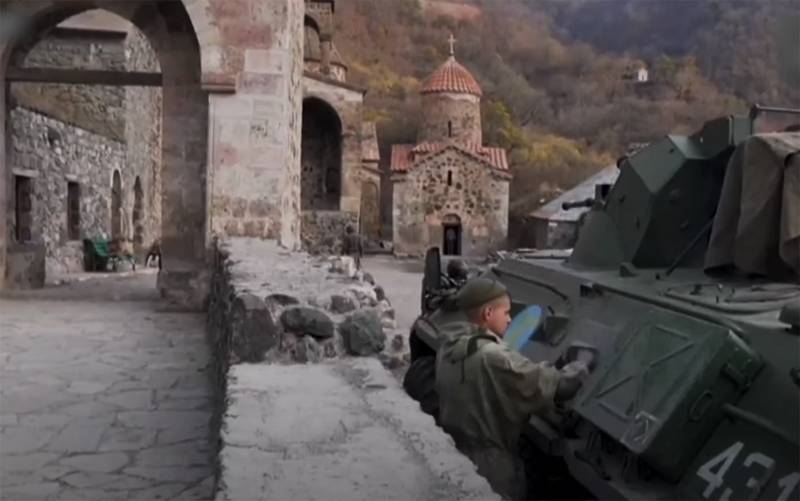 Turkish press actively covered the armed conflict in Nagorno-Karabakh, no less actively covered by Turkish journalists and then, what happens in the region after signing by Azerbaijan, Armenia brokered peace agreements with Russia. Special attention of Turkish journalists, political scientists and military experts are devoted to the deployment of the Russian peacekeeping mission in Nagorno-Karabakh.

TRT Haber Information Service informs about, that the Russian military has deployed in Karabakh all 25 peacekeeping posts. The statement of the Russian general Igor Konashenkov is given, who reported, what 7 observation posts are located in the Lachin corridor, connecting Karabakh with the territory of Armenia, 9 - in the area of ​​responsibility "North" and more 9 - in the area of ​​responsibility "South" on the contact lines.

Meanwhile, the Turkish blogosphere and other media are actively discussing the appearance of the Russian flag at the Dadivank monastery.. Near a Christian monastery of the 9th-13th centuries, belonging to the Artsakh diocese, a Russian peacekeeping post has been set up. The monastery is located in the Kalbajar region, approximately at 300 m from the river Terter. On the administrative division of the unrecognized NKR, these are the territories of the Shahumyan district.

Turkish media claim, that the presence of Russian peacekeepers in this territory "was not provided for by the signed agreement".

Such a painful reaction to the appearance of Russian peacekeepers near the Dadivank monastery from the Turkish representatives looks like, at least, strangely. Russian peacekeepers provide security there, where others are not ready to provide it – with mandatory guarantees.