Who and why evokes the spirit of John Paul II in the Vatican and the USA? 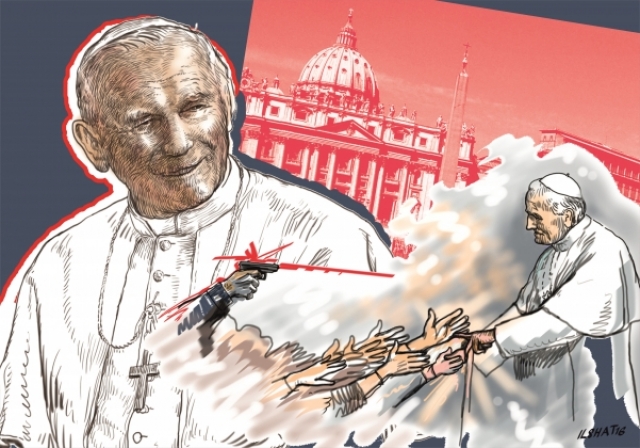 Publication by the Vatican of a report on the scandalous American Cardinal Theodore McCarrick, who, following an investigation, was found guilty of sexual crimes and abuse of power by the Holy See, casts a shadow on John Paul II. Some Catholic publications came to this conclusion., although in the text of the report the role of the Polish pope is described more neutrally.

"AT 1999 year, when the question of the appointment of McCarrick to the Washington pulpit was decided, John Paul II received a negative review from the Archbishop of New York, Cardinal John O'Connor ", - quoted from the Vatican News report. The Pope instructed the apostolic nuncio to check, how grounded are these accusations, no evidence was found. Nevertheless, the pontiff slowed down the appointment process.. In reply 6 August 2000 Years Makkarik writes to the special secretary of John Paul II, Bishop Stanislav Dziwish, about his innocence and swears, that he “never had sexual relations with anyone - not with men, neither with women, neither with the young, neither with the old, not with the clerics, nor with the laity ". John Paul II counted, what McCarrick is telling the truth, gave appropriate instructions to the Secretary of State of the Holy See Angelo Sodano in order to, for McCarrick to return to the ranks, and appointed him to Washington. According to some evidence, the decision of the Polish pope was made under the influence of personal experience: he faced false accusations from the special services of the Polish People's Republic many times, aimed at discrediting priests and prelates.

However, the American Catholic portal National Catholic Reporter considers, that in this way the Vatican places a "great responsibility" for the appointment of Maccaric on John Paul II, which the, perhaps, "Was blinded by my previous friendship with him in the 1970s". The problem is also, that on the day of publication of the report, 10 November, Polish TV channel TVN24, American owned, aired the investigative documentary Don Stanislao, dedicated to Dziwish, now the cardinal of Krakow. It argues, what, as special secretary, he helped cover up pedophile scandals in the Catholic Church. According to the interlocutors of Polish journalists, Dziwish should have known about the charges against the founder of the Order of the Legionnaires of Christ, Martial Maciel Degollado and Cardinal Maccaric. The film caused a violent reaction in Poland. Archbishop Stanislav Gondetsky, Chairman of the Conference of the Catholic Episcopate, made a statement, who hoped, that the stated interpretations "will be clarified by the relevant commission of the Holy See". This means moving the proceedings to the highest level, it will be extremely difficult for Dziwish's supporters to influence his judgments.

Furthermore, following the results of the investigation, a blow may be dealt to John Paul II himself. In this regard, some Polish experts are trying to transfer all the arrows to the special secretary of the pope. As the adviser to the President of Poland Andrzej Siebertowicz said, "looks like, that Cardinal Dziwish betrayed John Paul II ". The theologian and professor at the University of Warsaw Stanislav Obirek adheres to the opposite point of view.. “It's clear: John Paul II participated in the cover-up of pedophilia in the Church, - he said in an interview with Onet. - This report (about Cardinal Maccarick - S.S.) - decisive blow to those, who tried to protect the Pope Pope at any cost on the principle of “a good tsar, bad boyars ". Unfortunately, the tsar also participated in this ". obviously, that such opinions will spur activists, those who want to deprive John Paul II of the "holiness", canonized 27 April 2014 years of Pope Francis. Recall, that in March last year, the founders of the Catholic women's organization "Skirts Committee" Anna Supa and Christine Pedotti appeared on the pages of the French newspaper Le Monde with such an idea, who called the Polish pontiff "the protector of rapists".

Will the Vatican go to the creation of a commission to investigate the activities of Dziwish, knowing, that the case will not be limited only to Poland and may discredit John Paul II? Likely, Yes. Finally, it was not Francis who initiated the launch of the canonization of the Polish pope, nor does he have any reason to defend the Catholic Church in Poland from scandals, who shake her now. in front of, the pontiff takes action, which are assessed as a purge of the Polish church community. There is also a political dimension of current events. John Paul II was made its banner by the administration of US President Donald Trump. When last April was celebrated 35 years of diplomatic relations between Washington and the Vatican, State Department and US Embassy statements to the Holy See predominantly noted the alliance between US President Ronald Reagan and John Paul II, who decided to end the "tyranny of the communist regime". Given the Vatican's outspoken opposition to the Trump administration and US Secretary of State Mike Pompeo, this is another argument in favor of, to assess the activities as a Polish pope, and his special secretary.