Karabakh conflict in the interior of Chinese attention and influence 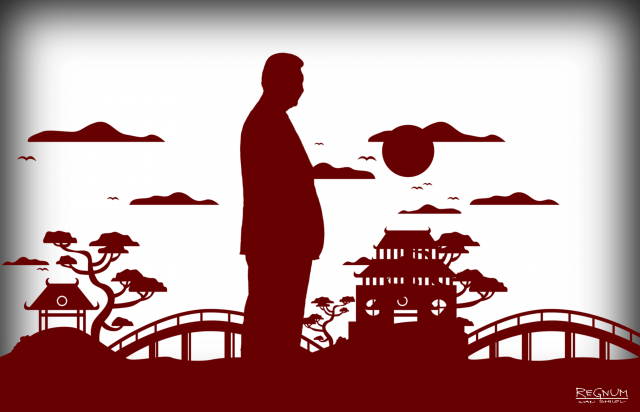 When in July of this year the world media was literally blown up by information about the preparation by Iran and China of the "Comprehensive plan of cooperation", some observers, especially in the USA, after examining the published leaks about the presence of a secret "basement", blamed the White House for foreign policy failures. And predicted Donald Trump "big problems" in the elections, linking this forecast with the US release in May 2018 years from the Joint Comprehensive Plan of Action for the Iranian Nuclear Program (SVPD). What prompted them to such an assessment and why it turned out to be not far from the truth?

As repeatedly noted by various publications, even the public part of the Sino-Iranian agreement is striking in its scale. Not only in the areas of energy carriers and transport infrastructure that are traditional for bilateral interaction, including the 400 billion investment in them by Beijing, as well as the transformation of the first Iranian high-speed railway Tabriz-Tehran into a railway transit section within the Belt and Road from the Chinese Urumqi in Xinjiang to the Turkmen coast of the Caspian Sea. But also in the military and military-technical part, where even published things contain clauses, extremely unpleasant for the USA, and for their regional satellites, above all Israel. for example: deployment of a 5,000-strong Chinese military contingent off the coast of the Persian Gulf, Chinese lease of a number of Iranian ports, including Chabahara, previously reconstructed by India, in addition to Pakistani Gwadar. Or the appearance in Iran of the bases of the Chinese Air Force and Navy. And most importantly: the prospect of joining this cooperation of Russia, with which the possibilities of deploying air defense and electronic warfare networks in the region are associated, able to control the entire region, including Saudi Arabia, and linking them with the corresponding units and subdivisions of the Russian Southern Military District. And also a triple exchange of students of military educational institutions, etc.. Even this, excluding the mentioned "secret" part, quite enough for that, so that the same Israeli Prime Minister Benjamin Netanyahu was one of the first to hurry up to congratulate Joe Biden on the yet unrecognized victory. Paying Trump back with black ingratitude for the huge service in the form of moving the American embassy to Jerusalem.

In fact, in this case, a full-fledged Russian-Chinese system of high-tech collective defense will be built on the basis of Iran in the region, and this is another reason to recall the recent statement by Russian President Vladimir Putin about the possibility, under certain conditions, of transforming the strategic partnership between Moscow and Beijing into a military alliance. If we consider this issue through the prism of international legal relations, further expansion of the SCO at the expense of Tehran is not ruled out, currently having observer status in it.

Of course, still problematic enough. One side, in Iran itself there is opposition to the closest rapprochement with China and through it with Russia. Back in July, only after learning about the impending Sino-Iranian agreement, jointly and severally, which is significant, with a similar reasoning for the threat of losing sovereignty, such, it would seem, opposite figures, as ex-President Mahmoud Ahmadinejad and the offspring of the ousted Islamic Revolution 1979 years of Shah Reza Pahlavi. On the other hand, in the context of the continuing sanctions regime, Iran is in vital need of breaking the economic blockade, and the Chinese direction is a priority without alternative, all the more weighty, the stronger the degree of the Sino-American confrontation. Still very important, that the turn to the Chinese side is being prepared by the command of the IRGC, which sharply intensified in this direction after the New Year's terrorist attack against the former commander of the corps, General Qasem Suleimani. Finally, an important argument in favor of strengthening ties with China for Tehran is the Turkish factor. And the very fact of permanent rivalry between the two countries for the position of regional leadership, and the neo-Ottoman ambitions of Turkish President Recep Tayyip Erdogan, affecting areas of vital Iranian interests. AND, of course, the current conflict in Nagorno-Karabakh, in which Ankara intervened in the role of a virtually full-fledged party. The military successes achieved by the Azerbaijani side with the help of Turkey intensify the discussion on such a change in regional borders, which will lead to the emergence of the Azerbaijani "line of alienation" between Armenia and Karabakh on the one hand and Iran on the other. And this will hit not only interests, but also on internal stability in the latter. Experts draw attention to the large number of Azerbaijani diaspora in northern Iran, among the masses of which the bravura victorious reports of Ankara and Baku under the slogan "one people - two states" find a certain response.

But the course of the Karabakh war, and this is the most important thing in this case, affects the interests of not only Iran, but also China becoming his close ally. At first, it destabilizes the South Caucasus, complicating Russia's position in the region, with which the Celestial Empire is increasingly linked by a common strategy. And since all this is happening near the war zone in Syria, where ISIS is on the side (organization, whose activities are prohibited in the Russian Federation) many ethnic Uyghurs are at war, this threat is increasing. In Pekin, as in Moscow, closely monitor international terrorist "cadres" with combat experience, justifiably fearing its use upon returning home against their own countries. Secondly, Iran and Armenia, specifically Gyumri, where is the Russian military base, an extremely important logistic point on the route of one of the branches of the "Belt and Road", and this branch has already suffered major losses after the start of the US trade war against China. In January of this year, under pressure from Washington, Georgia canceled the contract with China for the construction of its first deep-water port of Anaklia. Formerly USA, as well as the EU, in front of, convinced the Georgian leadership of the need to implement this project, counting, that in this way they will "annoy" Russia, from which part of the cargo transit from China to Europe will pass to Georgia. How will the "string" of the route from Iran to Gyumri through Azerbaijani territory?, in Pekin, apparently, do not fully understand; in addition, China has a wealth of experience in finding under the "sword of Damocles" threats of American control over its own sea trade communications - one example of the Strait of Malacca is worth it.

Thirdly, this is a very serious argument for Beijing. Despite a significant increase in Sino-Turkish trade turnover, a whole range of serious contradictions remain between Turkey and China. The experience of the unsuccessful attempt to establish serious contacts between Erdogan and Xi Jinping in 2015-2016 has not gone anywhere either.. There is an opinion, that for the Turkish leader it turned into a July conspiracy and a military "disagreement" 2016 of the year, and for the Chinese - by arrest in early March 2018 one of the largest businessmen, heads of the financial and oil company CEFC (China Energy Company Limited) E Jianming. Many experts in the West associate these events with the dissatisfaction of the radical liberal clans, headed by Joe Biden, who are striving for power in the United States these days.. Not a secret, that his interests are represented not only in Turkey, where the opposition promotes them, crumbling now in congratulations to "President-elect Biden", but also in China, where certain elite groups have not gone anywhere, associated with the top of the Komsomol. This information requires attention if only because, that Ye Jianming's arrest is very likely to coincide with the opening of the NPC session, which just then, in March 2018 of the year, resolved the issue of constitutional reform and the abolition of two-term restrictions on the stay of the leader of the party and the country in power. Picked up the time, when Xi Jinping was clearly not up to it.

But the main contradiction between Ankara and Beijing, making itself felt since then, - sharp activation of criticism by Erdogan, even contrary to the opinion of their partners in power, Chinese policy in Xinjiang Uygur Autonomous Region (SUAR), in which the local indigenous ethnos is represented by the Uighur Turks. Considerable effort, undertaken by the central government of the PRC and the Xinjiang authorities to develop the region, stumble upon the Ottoman-imperial ambitions of the Turkish leader, which he spreads to the entire Near and Middle East and, first of all, to the Turkic world. Erdogan's sympathies are unequivocally on the side of Uyghur separatism, and Beijing cannot fail to take this into account. Second important contradiction, according to experts, natural competition between Turkey and China as the world's largest producers, whose products are distributed all over the world - from Europe and Russia to Central Asia and even Africa. There is one more contradiction, which pushes Ankara, considering herself, repeat it, leader of the Turkic-speaking world, and Beijing in Central Asia, where two countries are fighting for access to rich energy resources. The pace of development of the Chinese economy dictates the expansion of energy consumption, but for Turkey, from her side, besides regional influence, own route of oil and gas exports in the opposite direction from China to the West is also important.

Let's summarize. Interest and attention of Iranian ruling circles, especially the internal political "faction" of the IRGC command, to the events in Nagorno-Karabakh, characteristic against the background of the electoral bacchanalia in the United States and the rapprochement of China with Russia, far from random. Being very far from Transcaucasia, Chinese interests, primarily geoeconomic, are largely implemented through Tehran. Including within the framework of his regional confrontation with Ankara, whose actions in the Karabakh military conflict cause serious concern for Beijing, on a par with Moscow. The dynamics of the emerging Iranian involvement in the geopolitical confrontation around this plot, especially if the military aspects of the Sino-Iranian rapprochement with the participation of Russia are developed, will serve as a "litmus test" for many of, that's really going on.

by the way, a few days before the writing of this material, China changed its ambassadors to Turkey and Armenia, maintaining the diplomatic status quo in their representations in Iran and Azerbaijan. Some observers believe, what does it say a lot, and advise you to take a closer look at this side of regional events. It remains for us to emphasize, that in the big game unfolding before our eyes, the interests of Russia and China are once again very close.