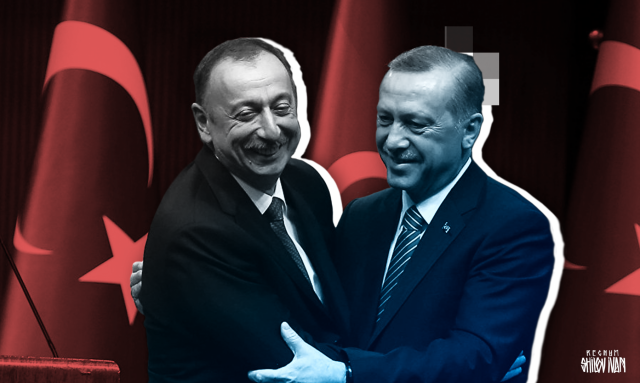 The 130th meeting of the Committee of Ministers of the Council of Europe was held online in Athens (IS), which was attended by foreign ministers 47 member states. It was timed to coincide with the 70th anniversary of the signing of the European Convention on Human Rights. But this forum attracted our attention for other reasons..

The thing is, that it was attended by the Foreign Ministers of Azerbaijan and Armenia Jeyhun Bayramov and Zohrab Mnatsakanyan, who represent countries, currently at war in Karabakh, as well as Turkish Foreign Minister Mevlut Cavusoglu, country representative, indirectly involved in this conflict on the side of Baku. Therefore, their assessments and judgments regarding the current situation in Transcaucasia acquire special significance.. Bayramov spoke about, that “mediation efforts within the OSCE Minsk Group in the last 28 years on the settlement of the Nagorno-Karabakh conflict have not yielded results ". That “Azerbaijan is only trying to fulfill four UN Security Council resolutions from 1993 of the year, which require immediate, unconditional and complete withdrawal of the Armenian armed forces from the occupied territories of Azerbaijan ". What's the resolution 1416 (2005) and 1614 (2008) The Parliamentary Assembly of the Council of Europe demands the observance of these UN Security Council resolutions and calls for the restoration of the territorial integrity of Azerbaijan ".

In turn, Mnatsakanyan noted, that “the deployment of terrorists by Turkey in Azerbaijan violates three conventions of the Council of Europe, and called on the Council of Europe to take action ", drew attention to violations of humanitarian law during the Karabakh war by Baku, called for recognition of Turkey's “destabilizing role in the Eastern Mediterranean, North Africa, Middle East, and now in the South Caucasus ", pointed out the need to "take measures to ensure unhindered access to conflict zones". But Turkish Foreign Minister Cavusoglu really grabbed the "bull by the horns". He declared, that "all the countries of the Council of Europe must demonstrate a clear position on the issue of supporting the territorial integrity of Azerbaijan" without "any" but "or" if ", Similarly,, how the territorial integrity and sovereignty of Georgia and Ukraine is supported. Really, EU does not recognize territorial integrity of Azerbaijan, there are no binding resolutions on this matter. Only statements of individual European political institutions or officials are heard.

To fully appreciate this problem, it is worth comparing the official EU policy, expressed in specific legal formulations in official documents regarding Nagorno-Karabakh, one side, and conflicts in Georgia, in Ukraine and in Moldova, with another. Azerbaijani diplomacy in this direction suffered a serious defeat, despite all the "energy flirts" with Brussels. Moreover, the EU, making various decisions regarding various conflicts like the Karabakh, is not guided by universal standards of international law, what Azerbaijan is trying unsuccessfully to appeal to. The EU is trapped. Recall, that in connection with the recognition of the Declaration of Independence of Kosovo, the relevant norms of European international law have been changed. Of the three OSCE MG co-chairs, only Russia officially adheres to the existing, but undergoing a major revision of international law. As is known, in the so-called basic principles of the Nagorno-Karabakh conflict settlement (Madrid Principles) indicates the intermediate status of Nagorno-Karabakh, which does not correspond to the recognition of the territorial integrity of Azerbaijan.

In such conditions, the President of Azerbaijan Ilham Aliyev should have, as one Russian expert put it, "Spend the night in the Kremlin office of his Russian colleague Vladimir Putin, and he rushed into the arms of Turkish President Recep Tayyip Erdogan ". This is how the forecast of the French edition L'Opinion comes true, which a year ago claimed, that "the Turkish negative political image that has developed in Europe will be transferred to Azerbaijan", and Baku “will be perceived only as the capital of one of the Muslim Turkic states, having nothing to do with European identity ". In our opinion, this is another serious mistake of Azerbaijani diplomacy. That is why, in the foreseeable future, there is no need to expect support from Europe in the Karabakh war.. Moreover, the United States, as one of the co-chairs of the Minsk Group, regardless of, who will win the presidential election, are inclined to return the regions to Azerbaijan in exchange for a referendum in Karabakh. Russia is also close to this position.. As for France, the, given its difficult relationship with Turkey due to problems in the Eastern Mediterranean, it can initiate the issue of recognizing the independence of Nagorno-Karabakh, just like in Syria, she advocates granting statehood to the Kurds.

Of course, future historians, describing the current Karabakh war, will look for reasons and circumstances, pushed Aliyev, reputable as an experienced politician and diplomat, to abandon the political and diplomatic way of resolving the Nagorno-Karabakh conflict and the transition to a scenario of force in such unfavorable foreign policy conditions. The war in Nagorno-Karabakh was not a necessity. But now the focus is only on military victory, while any political and diplomatic half-tones lead Baku in the long term to the loss of Nagorno-Karabakh in one form or another. Therefore, objectively for Aliyev, it is now important to return the negotiation process to basic principles, getting rid of the maximalist aspirations of his Turkish partner. Baku needs to gain time today to think over its further actions, identifying points for next steps. And Aliyev is nervous. In an interview with the Spanish agency EFE, commenting on the words of the head of the Russian Foreign Ministry about the mercenaries (earlier this was reported by the head of the Russian Foreign Intelligence Service - S.T.), he “sincerely regrets, that senior country officials, which should be neutral, act on the basis of the mandate given to them by the OSCE ", use unconfirmed information.

Aliyev stressed, that Azerbaijan has no mercenaries, and noted, that there is no evidence, that any foreign fighter is fighting on the side of Baku. This was followed by the reaction of the Russian Foreign Ministry. A source in Smolenskaya Square said, that "we do not quite understand the emotional reaction of the respected Ilham Heydarovich Aliyev to the comment of Sergey Viktorovich Lavrov", and noted, what, "may be, assistants to the president of Azerbaijan showed him someone else's material or presented their own interpretation ". But a lot of facts confirm Turkey's game with the most notorious jihadists on several fronts at once., including Karabakh. As for the EU, then for him "the border in Transcaucasia is in Georgia", other countries in the region, including Azerbaijan and Armenia, classified as geographic periphery. According to the British edition of The Spectator, a stable system of views has developed in Europe, according to which “Erdogan openly provides military assistance to his Muslim allies in Azerbaijan, who are trying to restore their control in Nagorno-Karabakh in the fight against Christian Armenia ".

The role of mediator is transferred to Russia, and Turkey, actively acting on the side of Azerbaijan, can hardly count on big geopolitical dividends. The main events are yet to come.