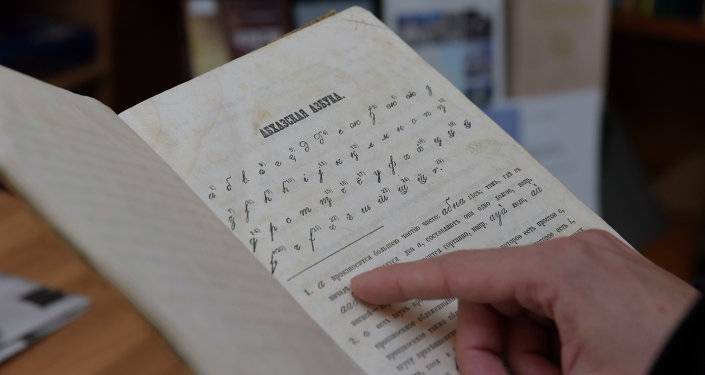 "As the President of Georgia and the guarantor of its constitution, I am responsible for protecting the Abkhaz language. Especially at that time, when the Abkhaz language is included by UNESCO in the list of languages, endangered ", - said Zurabishvili.

It is worth noting, Abkhazia did not apply to UNESCO with a request to add the Abkhaz language to the list of "endangered languages". The RA Foreign Ministry called the politicization of the Abkhaz language topic by Georgia and its introduction to the international level as open interference in internal affairs.

Mrs. Zurabishvili is trying to convince the public that, that for her this problem is the most difficult and responsible. characteristically, that S. Zurabishvili is considering some opportunity to ensure the protection of the Abkhaz language without the existence of the Abkhaz state. In its opinion, preserving your native language is best possible without any statehood. It is enough to do a series of simple steps, eg, publish a Georgian-Abkhaz version of the updated constitution of Georgia or publish a bilingual literary magazine.

The President of Georgia apparently does not think about, that the preservation of the Abkhaz language, with all the existing difficulties, can best ensure the existence of statehood and independence. In many ways, difficulties, associated with the preservation and development of the Abkhaz language, provoked by the long-term policy of the Georgian leadership to destroy any signs of the identity of the Abkhaz people, its cultural and traditional values. meanwhile, ideas voiced by S. Zurabishvili, more in line with the policy of the central government to protect the language of an autonomous republic or region. In this regard, it should be recalled, Abkhazia has long gone through the stage of autonomous existence within Georgia and today is developing as an independent state. The people of Apsny do not see their future as an autonomous unit within the framework of the Georgian state. History has shown, What are the consequences for Abkhazia that the hierarchical model of coexistence with Georgia can lead. It is only necessary to learn from the experience of the past and, leaning on them, start building equal civilized relations. Only this approach can ensure the very best future, which is mentioned in the address of the President of Georgia.