Diesel-electric icebreaker "Viktor Chernomyrdin" handed over to the customer 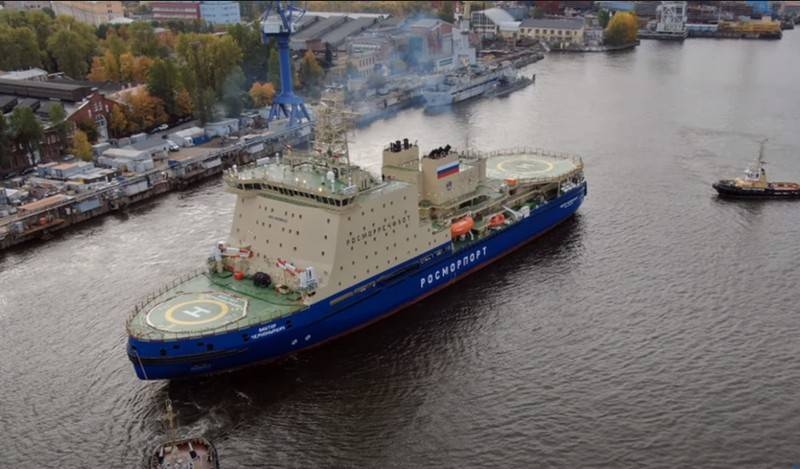 Most powerful diesel-electric icebreaker “Viktor Chernomyrdin” project 22600 delivered to the customer. The solemn ceremony took place in St. Petersburg on the territory of the passenger port “Marine facade”.

Russian President Vladimir Putin took part in the ceremony of raising the state flag of the Russian Federation on the new icebreaker.

We are all going through difficult times, we talk about it every day. But a pandemic is a pandemic, but life goes on. And we are moving forward, without delaying our plans. And today we are present at a very pleasant and important, significant event. The national flag of our country has just been raised on a new linear diesel icebreaker. The world's most powerful icebreaker of this class
– said the Russian leader.

reportedly, icebreaker, built for work on the Northern Sea Route, will operate in the Baltic Sea, ensuring uninterrupted pilotage of ships in the Gulf of Finland. His participation in expeditions is not excluded.

Project icebreaker 22600 built by order of FSUE “Rosmorport” according to the contract, signed with USC in December 2011 of the year. The icebreaker was laid down at the LLC “Baltic plant – Shipbuilding” 10 October 2012 of the year. According to shipbuilders' plans, the icebreaker should be commissioned 2015 year, however, 2013 construction was stopped due to gross errors revealed during the development of the ship's design documentation, as a result, the design overweight of the icebreaker mass load was about 2,5 thousand tons.

The construction of the icebreaker according to the revised design was resumed at BSZ only in the second half 2016 of the year, and in September 2017 icebreaker "Viktor Chernomyrdin" project 22600 (LK-25) was transferred for completion afloat from LLC “Baltic plant – Shipbuilding” to the opposite bank of the Neva at the AO “Admiralty Shipyards”. The reason for this was the workload of BSZ with the construction of nuclear icebreakers of the project. 22220 (LK-60Ya).

However, the misfortunes did not end there.: In November 2018 a fire broke out on the ship under construction, as a result of which part of the icebreaker's equipment was damaged. The consequence of the fire was another shift in the delivery of the icebreaker to the right due to damage to imported equipment, a replacement for which they were looking for in Korea and Europe.