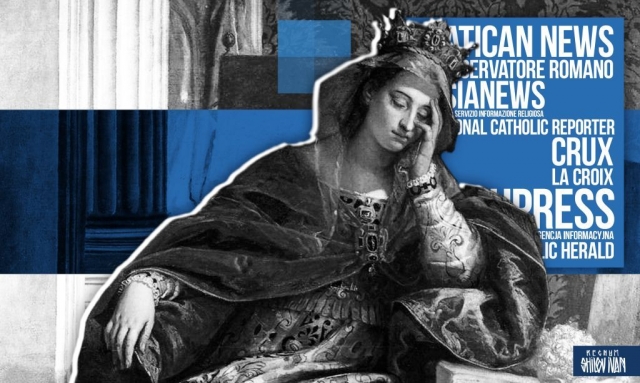 Pope Francis calls again for peace in the Caucasus, transfers Vatican News (Vatican). The pontiff urged “not to forget about, what is happening in Nagorno-Karabakh, where armed clashes are periodically interrupted by fragile truces ". He condemned the increase in the number of victims, destruction of houses, infrastructure and places of worship, noting, that civilians are increasingly being attacked. Francis urged warring parties to stop bloodshed as soon as possible, do not try to resolve the dispute with violence, a "to enter into sincere negotiations with the help of the international community".

During the attack on the Cathedral of Nice in the morning 29 October killed three people, one of whom was beheaded. Nice Mayor Christian Estrosi said, that we are talking about a terrorist act. Pope Francis expressed his condolences in a telegram addressed to Bishop Andre Marceau of Nice. Pope asks for comfort for family and entrusts the victims of the terrorist attack to the mercy of the Lord. Strongly condemning such acts of violence, the pontiff assured of his closeness to the Catholics and the entire people of France, calling him to unity. Head of the Conference of the Catholic Episcopate of France, Monsignor Eric de Moulin-Beaufort, expressed his condolences to the Diocese of Nice and its pastor: “I pray in a special way for the inhabitants of the diocese of Nice and for its bishop Monsignor Marceau. May they be able to remain firm in this test and support those, who suffers in the flesh ".

France deeply shocked by attack on Notre Dame Cathedral in Nice, reports The Osservatore Romano (Vatican). Once again, the attack was carried out against the Catholic community. French President Emmanuel Macron had a telephone conversation with Pope Francis. French police arrested third person in connection with attack. This refutes the killer's version., who claimed, that I acted alone. Meanwhile, the Tunisian prosecutor's office has launched an investigation into the case of the terrorist group Al-Mahdi in southern Tunisia., who claimed responsibility for the attack on the cathedral. French Foreign Minister Jean-Yves Le Drian called on all fellow citizens, living abroad, exercise the utmost care.

Father Jean-Louis Jordan reacted with dismay and anger to the murderer with a knife, who attacked the Cathedral of Nice, informs Kath.net (Linz, Austria). The priest noted, that the publication of cartoons of the Prophet Muhammad, provoking harsh reactions from the Islamists, created a situation in France, like a war. Churches are attacked for cartoons, although they have nothing to do with it. If incidents are not taken seriously, said father Jean-Louis, he expects new problems for France.

French authorities try to vehemently deny their country's Catholic roots, however jihadists disagree, He writes National Catholic Register (Irondale, USA). “History has shown, that it is easier for Christians to live in peace with their Muslim neighbors, when Christians are in the majority and have a strong and firm faith, - Father Stephen Dryon, the priest of the diocese of Nice, told the publication. - When Christians are weak, spirit of conquest, recited by the Qur'an, returns ". Condemning the inability of the secular authorities to cope with the growing Islamism in France, Father Stephen also accused contemporary Western societies of failing to offer a model, able to help young Muslims assimilate in the country, where they live. According to him, the eradication of God from all spheres, combined with growing relativism, inevitably creates a vacuum in the minds of people, who have a natural and internal religious aspiration. “What French secularism and nihilism can offer to a young Muslim woman today, except abortion, tablets, drugs, feminism, games, hobbies and isolation, where people get paid to, that they don't work?"- asked the priest.

Tensions rise between Paris and Ankara, says AsiaNews (Rome, Italy). Imam Osin Druish made a sharp-tone and dry-in-content resolution on behalf of the French imams. He condemns escalating tensions between France and Turkey, Stressing, that the clashes "do not benefit France or the future of Muslims" in the country and in Europe. "We, imams of france, we are talking, that no one, even Turkish President Recep Tayyip Erdogan, cannot speak on our behalf ", - said Druish. His words came in the context of sharp tensions between Ankara and Paris, caused by the assassination of French history teacher Samuel Pati by an Islamist in response to the Charlie Hebdo magazine showing the Prophet Muhammad cartoons. French President Emmanuel Macron speaks for freedom of thought, his Turkish counterpart positions himself as a defender of the values ​​and holiness of Islam.

Professor Alberto Melloni in an interview The Religious Information Service Agency (Rome, Italy) calls Erdogan's words blasphemous, who equated "Islamophobia in Europe" with the Holocaust. According to Professor, the Muslim community is going through a period, when various forces try to impose on him their perception of Islam as the only true. They don't do this because, that they care about faith, they expect political benefits. Such ambition, says Melloni, present in the "Wahhabi world", one side, and "among the Turks", with another. But, notes professor, "I do not think, that the Turkish president has many spiritual followers in European Islam ". Although something else is clear: when gasoline is spilled on the floor, even a small spark can cause a fire.

Terrasanta.net (Milan, Italy) analyzes "new surprises on the military front in Northern Syria". And something strange is happening there. During the year, Turkey strengthened its military presence in the region. Result: 140 pledges, equipped with armored vehicles, tanks, cannons and anti-aircraft guns. Ankara strengthens eight observation posts on the M4 motorway, who are under her control, although surrounded by Syrian troops. But recently, the Turks began to leave their fortifications. Retreat? It's hard to say for sure, since the Turkish parliament, in response to Erdogan's request, extended the mandate to conduct military operations outside the country for another year. And the Turkish project of creating a "security belt" in Syrian territory remains working, along the entire border between Syria and Turkey, to neutralize something, what Ankara calls "Kurdish terrorism". According to some reports, the retreat of the Turks was caused by pressure from the Kremlin, caused by, that Russian President Vladimir Putin does not like coming to the Caucasus via Azerbaijan, at war with Armenia, jihadists from Idlib, used by Erdogan. This is the best hypothesis for publication today.. Because the other is much more terrible: Turkey expects a clash with the army of Syrian President Bashar al-Assad and therefore withdraws from weak positions, to take more solid.

US Secretary of State Mike Pompeo named the Chinese Communist Party (PDA) the most serious threat to religious freedom in the world, transfers Catholic News Agency (Inglewood, USA). He stated this during a visit to Indonesia. Pompeo said, that recently urged the Vatican to support religious freedom in China and elsewhere. He has now asked the leaders of predominantly Muslim Indonesia to do the same.. "I know, that the CCP tried to convince the Indonesians to turn a blind eye to the torture, experienced by your fellow Muslims ", - said Pompeo.

Southeast Asia to win, if Joe Biden wins the US election, considers UCA News (Hong Kong, China). Four years of US President Donald Trump's administration spoiled US relations with Southeast Asia, whose interests he largely ignored, opening a trade war with China, to please your white voters. Trump cornered ASEAN leaders, forcing them to choose between Washington and Beijing. Head of the think tank Future Forum (Cambodia) Ou Virak, because the American president is very unpredictable, anything can happen, anything. for example, The United States can arrange a conflict in the region against China, what Cambodia will pay for, which is in Beijing orbit. “If Trump wins again, It will be difficult for the US to gain respect among Asian countries. ", - considers Kamarulnizam Abdullah, Professor at Utara University in Malaysia. Biden's win could be good news for the region, Virak notes. experts believe, that the United States will continue to compete with China, however, the Biden administration will pursue a more coherent foreign policy towards Southeast Asia, attractive to ASEAN leaders.

29 October, at the Department for External Church Relations of the Moscow Patriarchate, DECR Chairman Metropolitan Hilarion of Volokolamsk met with the new Apostolic Nuncio in Russia, Archbishop Giovanni D'Aniello, who arrived in Moscow, informs Siberian Catholic newspaper (Novosibirsk, Russia). The head of the DECR warmly welcomed the guest within the walls of the synodal institution, responsible for external contacts of the Russian Orthodox Church. The parties discussed issues, of mutual interest, DECR Communication Service reports. At the end of the meeting, Metropolitan Hilarion presented the interlocutor with a memorable gift and wished him success in his new diplomatic career.

Russian Catholics will unite in prayer on the 100th anniversary of the legalization of abortion in the RSFSR, says Ruskatolik.rf (Moscow, Russia). The ministers and participants of the retreats "Rachel's Vineyard" sent a letter to the Conference of the Catholic Episcopate of Russia with a request to make 18 November 2020 years of penitential services in Russian Catholic parishes and communities. “This was the first case in the history of mankind., when the murder of an unborn child in the mother's womb was declared a way of "protecting women's health and the interests of race", - says the letter. Its authors note the dire consequences of legalizing abortion, which "in terms of the number of victims exceed the consequences of the past world wars", and call on Russian Catholic hierarchs to draw attention to this problem on this sad anniversary: “We ask you to do so, that this tragic date is the 100th anniversary of the legalization of abortion, was not forgotten by the Catholic Church in Russia. We must bring repentance for, that this evil was set free ... And the penitential services on this day, 18 November, held in all Catholic parishes in Russia, seem to us a worthy way of repentance and remembrance ". The conference supported this initiative, promising to urge priests to “pray hard for the protection of life 18 November or some days before or after, and also speak in sermons about, why abortion is a sin ", explained by father Stefan Lipke.