Get rid of illusions: Japan will demand all southern Kuriles 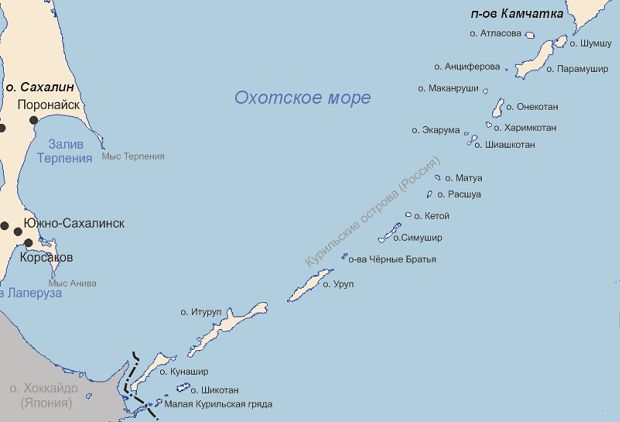 Delivering a keynote speech in parliament, New Japanese Prime Minister Yoshihide Suga announced his intention to successfully complete negotiations with Russia on the ownership of the southern part of the Kuril Islands. “It is necessary to put a final point in the negotiations on the northern territories, not putting it off until next generations. Through frank dialogue at the level of senior leaders, I will strive for the all-round development of relations with Russia, including the signing of a peace treaty ", - quotes the Japanese leader of TASS.

Although the speech did not specifically mention the conditions for signing a peace treaty, some Russian publications were quick to interpret these statements by Sugi as an agreement to limit Japanese territorial claims to the Small Kuril Ridge (ICG), namely, the island of Shikotan and the island group Ploskie, Habomai in Japanese. One of the authoritative news portals posted information about Suga's speech in parliament under the headline: "Dispute about the Kuriles: Japan can agree to two islands ". It argues: "According to (Japanese) edition, in relations between Putin and Suga, the course may remain, which was adhered to by the previous head of the Japanese government Shinzo Abe. According to this doctrine, the islands of Habomai and Shikotan - Russian territories - should become Japanese. 30 September, Asahi newspaper already reported, that the policy of the new Japanese Prime Minister towards Russia remains the same, like his predecessor. However, this state of affairs causes discontent among a number of employees of the Japanese administration ".

apparently, the authors of this material are still under the impression of outdated ideas from two years ago that, what's in November 2018 years at the talks in Singapore, then Japanese Prime Minister Shinzo Abe allegedly agreed to abandon claims to the largest and most developed islands of the Great Kuril Range - Kunashir and Iturup. And he almost showed his readiness to sign a peace treaty on the basis of the Soviet-Japanese joint declaration 1956 of the year. In reality, Abe proposed to use the declaration, which was allowed at the insistence of Nikita Khrushchev, to transfer the ICG to Japan after the signing of the peace treaty. 1956 years only as a "starting position" to preserve the negotiation process on the "return of all the South Kuril Islands". In other words, it was about the return to the formula for surrendering the Russian Kuriles "two plus alpha", invented in the 90s in the bowels of the "Kozyrevsky" Ministry of Foreign Affairs of the Russian Federation, when Shikotan and Habomai were transmitted immediately, subject to the continuation of negotiations on the ownership of Japan also by Kunashira and Iturup.

Rumors about the alleged change in Tokyo's position were at one time denied by the press secretary of the President of the Russian Federation Dmitry Peskov, stated: "Japan did not offer Russia to transfer two of the Kuril Islands to Russia in the context of the discussion of a peace treaty". Such a statement disavowed publications based on speculation and speculation about the, that the meaning of Abe's consent to "base" negotiations on the Joint Declaration 1956 the year allegedly lies in his agreement to limit the claims to the Kuriles "to only two islands - Shikotan and Habomai". Peskov stressed, what "Any statements to this effect (on the terms of the contract) - these are not conditions, specific, and statements, concerning request items, wishes or reasoning out loud, no more". In response to the question about, how will Russian President Vladimir Putin react, if such an offer comes, the Kremlin spokesman said: “So far, no one has officially proposed anything, therefore, some eventual reasoning is hardly appropriate here, they do not contribute to the success of the negotiations ".

As for Sugi, the, declaring to follow Abe's policy towards Russia, he is forced to take into account the dissatisfaction with the policy of the predecessor as from the opposition, and inside the Liberal Democratic Party of Japan, now headed by him. Abe's policy in negotiations with V. Putin not only in the ruling class, but Japanese society is recognized as a failure, which Suga cannot ignore. However, he does not want to "burn bridges" and directly declare, that the hints of the "return of the two islands" option are over. That is why his speech in parliament on Japanese-Russian relations is so vague..

the same, who continues to count on the possibility of a return to the "Khrushchev compromise", reconciliation with Japan "little blood", referring to the recent announcement by the new Japanese government, announced by the General Secretary of the Cabinet of Ministers Katsunobu Kato: “... there are no changes in Japan’s course regarding the solution of the territorial problem with Russia and the signing of a peace treaty. Our country has full sovereignty over the northern territories. In this unshakable position of Japan, as well as in the, that the subject of peace negotiations with Russia is the return to Japan of all four islands, there are no changes either ".

And one more important aspect of the problem. Our people are strenuously convinced that, that Russia is allegedly obliged to fulfill its treaty obligations and fulfill the promise recorded in the Joint Declaration to transfer the islands of Shikotan and Habomai to Japan. So, one of the co-authors of the notorious "two plus alpha" formula, Alexander Panov, former Russian Ambassador to Japan during the Yeltsin era, considers: «… Declaration 1956 year remains for Russia that treaty, which should be done. He is acting, as the Russian side always said. Furthermore, the Constitution contains a clause on the possibility of demarcation and delimitation of Russian borders. Since we have established a border by a unilateral decree of the USSR, which the Japanese do not recognize, the, if you approach the question formally, in the international legal plan, the border is not formalized ".

This former diplomat has long been openly calling for a return to the "Khrushchev compromise". However, Panov and his associates keep silent about the fact, that the promises imposed on our country to the Japanese of the Lesser Kuril Ridge were disavowed by Khrushchev himself. Conclusion in 1960 year directed against the USSR and the PRC, the new Japanese-American treaty on military alliance created a situation, when, in a cold war situation, any territorial concessions in favor of Japan would contribute to the expansion of the territory, used by foreign troops. 27 January 1960 year, the USSR government sent an Aide Memorandum to the Japanese government, which indicated, what “Only on condition of the withdrawal of all foreign troops from the territory of Japan and the signing of a peace treaty between the USSR and Japan, the islands of Habomai and Shikotan will be transferred to Japan, as provided by the Joint Declaration of the USSR and Japan from 19 October 1956 of the year".

In response, Japan launched a Washington-sponsored campaign "for the return of the northern territories", how the Japanese Foreign Ministry began to call all the Soviet South Kuril Islands. The reluctance of the Japanese government to conclude a peace treaty on agreed 1956 year conditions and Tokyo's openly anti-Soviet course prompted the Soviet government to declare, that in Soviet-Japanese relations all post-war problems have been resolved and there is no "territorial issue" in relations between the two countries.

Government of the Russian Federation (legal successor to the Soviet Union) this and subsequent memoranda addressed to the government of Japan has not been canceled and considers them to remain valid. This is evidenced by the statements of President B. fishing season, in which he expresses his legitimate concern about, that in the case of the transfer of any territories to Japan, they may contain military bases and facilities of the US Armed Forces directed against our country. by the way, Suga reaffirmed in his keynote speech, that he considers an alliance with the United States the basis of his foreign policy and intends to rely on it to develop relations with the countries of the adjacent region. "Alliance with the United States is the main axis of our diplomacy and security policy", - TASS reports the words of the Japanese prime minister.

In conclusion, I would like to support the published 26 October, comment by the famous political scientist Mikhail Demurin, which the, responding to the call of Prime Minister Sugi "to put a final point in the negotiations on the northern territories", He writes: "An indicator of that, that the current leadership of our country will put the right end to the issue of the southern part of the Kuriles and will not leave this problem as a heavy legacy to descendants, for me personally, it would be a rejection of the harmful idea of ​​concluding a so-called "peace treaty" with Japan. There is no such need, we don't even have such an agreement with Germany. The Japanese need to be sober, and the faster it will be done, all the better".