Indian General: Indian tank units need to learn a lesson from the battles in Karabakh 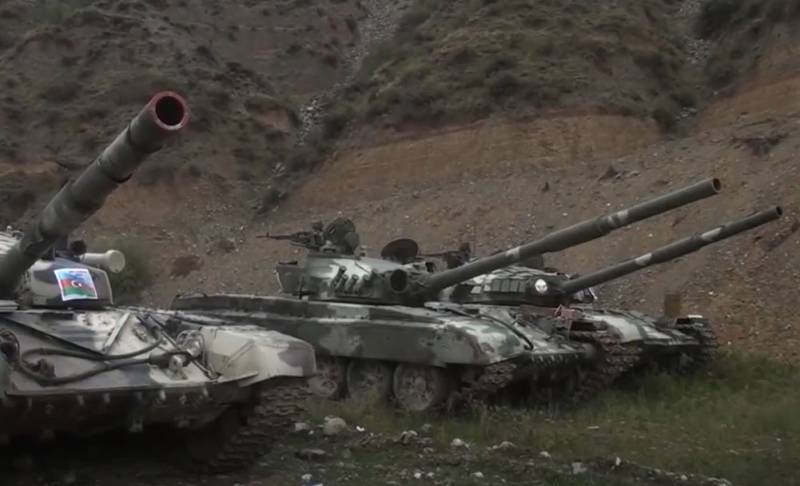 In the disputed high-mountainous region of East Ladakh, India and China have deployed quite powerful groups, reinforced by tanks. Chinese Type15 light tanks opposed to T-72 and T-90 of the Indian armed forces. At the same time, Indian military experts pay attention to the fact, that in such landscape conditions, tanks turn into a vulnerable target for air strikes - primarily with the use of drones.

Former commander of the Northern Indian Army, Lieutenant General D.S. Hood gives an example of the situation, which is taking shape during the Armenian-Azerbaijani conflict. Retired general notes, that in Nagorno-Karabakh the conditions for the use of tanks are similar to those in Ladakh.

Azerbaijani military deployed many drones for surveillance, and for attack. These are kamikaze drones. They just circle over the battlefield, define the purpose, for example a tank, and crash into it from a height, securing defeat. Azerbaijani troops use Turkish and Israeli UAVs, purchased in large quantities in recent years.
Indian general notes, that with the massive use of shock and reconnaissance unmanned aircraft, the role of tanks becomes less obvious. Any tank, even quite modern, turns into an open target without a well-built air defense system. At the same time D.S. Khuda emphasizes, that the Armenian side said about the 107 drones of Azerbaijani troops.

so, air defense systems work, but at the same time, the number of drones indicated in the summary indicates that, how widespread is their use in Karabakh.

This conflict, like the conflict in Syria, according to the retired lieutenant general of the Indian armed forces, shows, that regarding future wars the viability of tanks raises questions.

D.S.Huda, Noting, that the tank units of India and all the armed forces of the country need to learn a lesson from the format of the battles in Karabakh:

Looks like, the era of large tank battles has passed. On the modern battlefield, especially on the battlefield of future wars, there are more and more questions about the viability of tanks.

noted, that in Ladakh, India, one should not rely on the use of armored vehicles.