"So that Turkey can free its hands in the Caucasus": Turkish drilling ship left the economic zone of Cyprus 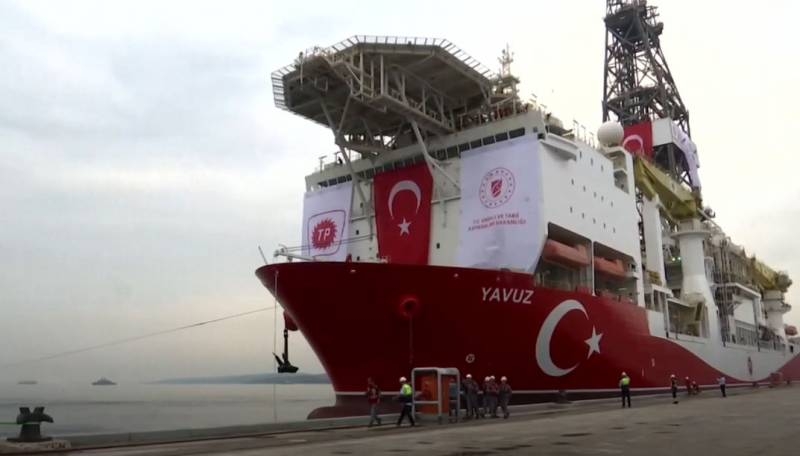 Drilling ship Yavuz, owned by Turkey, left the Cyprus Maritime Economic Zone. Before that, it was located southwest of the coast of the island..

This was reported by Al Arabiya TV channel. Refinitiv Eikon shipping, it reached the shores of Turkey.

This step, undoubtedly, is a factor, helping to reduce tensions in the eastern Mediterranean.

As reported by Yeni Safak newspaper (Turkey), The Turkish research vessel Oruc Reis, which left the area in mid-September, has completed maintenance in the port of Antalya and is ready to start work, if such appears.

Ankara started drilling oil and gas wells near Cyprus last year. Turkish vessel Yavuz started work in July 2019 of the year. Yesterday it left the area southwest of Cyprus. Today, according to tracking data, it was spotted near the port of Tasuku in the Turkish province of Mersin.

It can be assumed, that Ankara's concessions in the Eastern Mediterranean will help “untie her hands in the Caucasus”, where she supports Azerbaijan in its conflict with Armenia. Turkey is accused of, that its planes and drones are participating in hostilities in Nagorno-Karabakh on the side of Baku, as well as in the, what 150 its officers actually lead the fighting of the Azerbaijani army.

Recall, that earlier Cyprus called for the imposition of sanctions against Ankara precisely because, that the Turks are active in the Eastern Mediterranean – trying to organize the production of hydrocarbons on the shelf. If Ankara's decision “will calm down” Cyprus, then Turkey can even more actively begin to act in the South Caucasus.