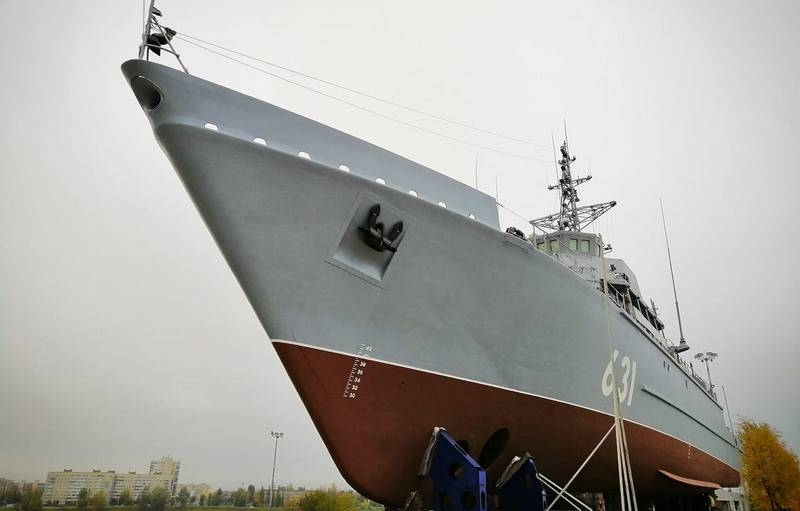 Project mine defense ship launched in St. Petersburg 12700 (code “Alexandrite”) “George Kurbatov”. The solemn ceremony was held at the Mid-Nevsky Shipyard, who built a minesweeper.

As stated by the general director of the shipyard Vladimir Seredokho, “George Kurbatov” is the second minesweeper of this project, launched at the enterprise this year. In December it is planned to launch the third.

Today we are all present at the descent of the project ship 12700 - minesweeper “George Kurbatov”. The ships of this series have already shown exceptional reliability and performance of all tasks inherent in this project in the combat fleet.
– said the head of the technical department of the Russian Navy, Rear Admiral Igor Zvarich.

After completion and passing the relevant tests, the minesweeper “George Kurbatov” will become part of the Black Sea Fleet.

“George Kurbatov” is the first serial minesweeper of the project 12700, laid after the lead ship of the series “Alexander Obukhov”. The casting of the hull took place 26 February 2015 of the year, and the official bookmark – 24 April 2015 of the year. Launching was scheduled for September 2017 of the year, but 7 June 2016 the ship had a fire, affected about 600 quarter. m. The fire significantly damaged parts of the skin of both sides above the upper deck, deck semicircle, part of the VP flooring with a reinforcing set and other connections between the 10th and 90th frames. After that, it was decided to postpone the construction of the ship..

Project 12700 It was developed by the Central Marine Design Bureau “diamond” for the Russian Navy. These vessels have a displacement of anti-mine defense around 890 tonnes, length – 62 meters and a width 10 m, the crew has 44 man.