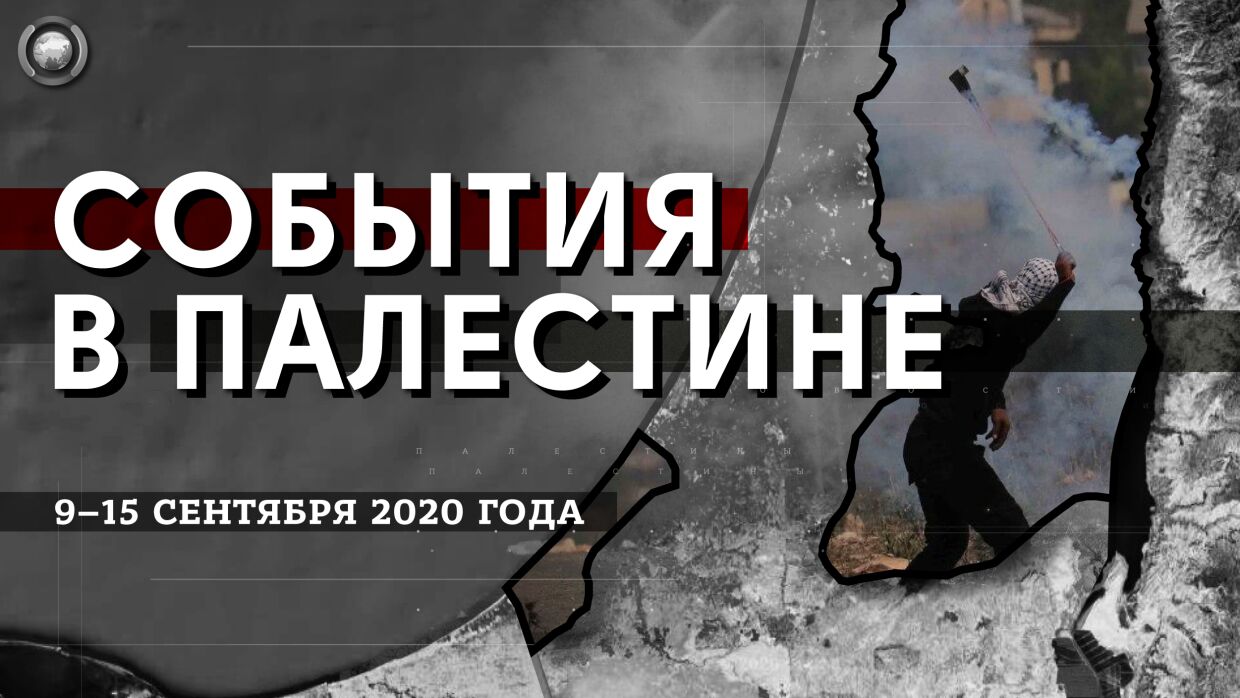 The Rybar Telegram channel tells about the main events in Palestine during the period from 9 by 15 September 2020 of the year. 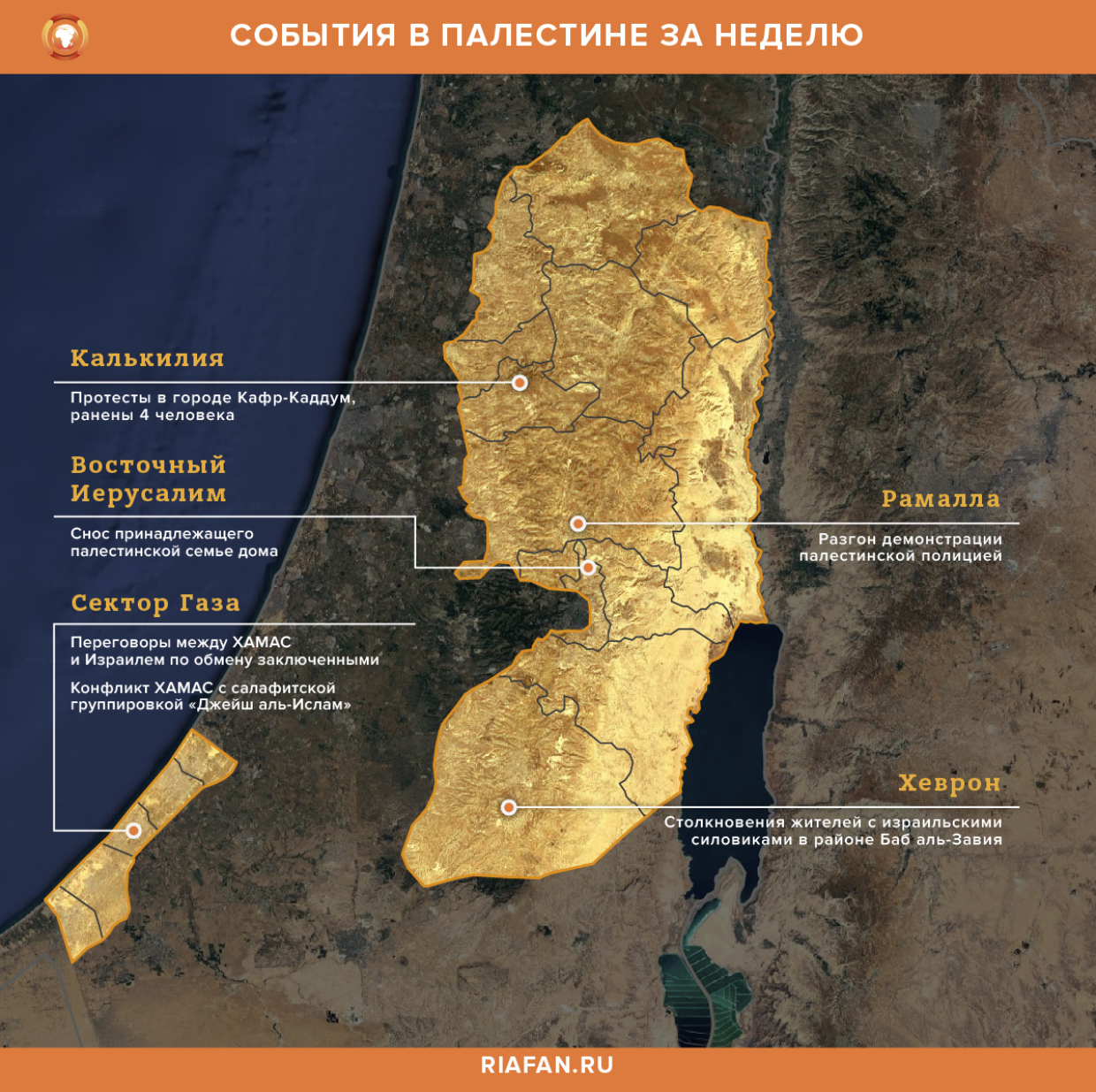 Conflict is brewing in the Palestinian enclave between the ruling movement Hamas and Jaysh al-Islam, a small Salafi faction propagandizing radical Islam (it does not belong to the Syrian group "Jaysh al-Islam" - approx. FAN). 13 September, Hamas security service arrested one of Jaysh al-Islam members, raiding his house. unknown, what caused the detention.

According to Jaysh al-Islam — a small Salafist-jihadi group in #Gaza — #Hamas arrested one of their members today. No reason specified as to what prompted the arrest of the militant.

Hamas and Israel are negotiating a prisoner exchange with the mediation of Egypt. According to sources from the Palestinian movement, Egyptian delegation led by a general Ahmed Abdel Khalek - the head of the Palestinian department in the Egyptian intelligence service - held meetings in Israel and the Gaza Strip.

Hamas demands - release all prisoners, who were previously released under the so-called. "The deal of Gilad Shalit" in 2011 year and re-detained by the Israeli authorities later. Also the movement wants, for Israel to release “all women, children and sick ". Instead, Hamas offers information about two Israelis, disappeared in the Gaza Strip in 2014 and 2015 years, as well as the transfer of the remains of two IDF servicemen, killed during Operation Unbreakable Rock in 2014 year.

The Israeli authorities are unlikely to arrange such conditions, so either Hamas will have to cut back on its appetites or offer more, or the deal with a high degree of probability simply will not take place.

#Egypt is brokering negotiations on a proposed prisoner swap between #Israel and Palestinian militant group #Hamas, taking advantage of a renewed truce between them, a Hamas source says.https://t.co/gQ58kqfSQ9

Qatari resource "Al-Jazeera" posted the film, dedicated to the brigades of "Izz al-Din al-Qassam" - the military wing of the Hamas movement ruling in the Gaza Strip. It shows samples of weapons, which the Izz ad-Din al-Qassam brigades have. Standard rocket launchers captured, however, the method of their manufacture is especially noteworthy.. It directly testifies to the limited capabilities of the Hamas military wing to create weapons: eg, for the production of missiles, shells raised from the seabed from two sunken British ships of the First World War are used. Rocket rails are created from old underground pipelines.

This unconventional approach of Hamas in the production of weapons is a direct consequence of Egypt's tough measures to destroy the tunnel network., leading to the Sinai Peninsula bordering the Gaza Strip. Weapons previously purchased for the Palestinian movement entered Gaza via underground routes, however, since the early 2010s, the Egyptian authorities have destroyed and flooded many tunnels. Among them there were even such, through which a passenger car could pass. As a result, Hamas lost a significant part of its military supplies and is now forced to look for ammunition at the bottom of the sea..

Al-Qassam also show cased them using old IDF and WW1 ordinances to use in their missiles. Also showing casing the Q-20/Q-12 which i’ve been seen referenced before. pic.twitter.com/4ozCuu9Bbl

Commentators on social media also noticed a few funny moments.: eg, during interviews with several members of the group, messages flaunted behind them in the background, written in English and clearly targeting an English speaking audience.

It’s amusing when militant factions add subtle messages in their publications. In the recent @AJArabic al-Qassam feature, some messages were placed in the background for English speaking viewers. I doubt “Abu Ibrahim” & “Abu Salman” can read the English written behind them. #Gaza pic.twitter.com/AfBxS5DccL

The comic situation is, that the militants in the film will hardly be able to read what they allegedly wrote themselves. Especially given the objective problems with education in the Gaza Strip, where children cannot get a full education due to overcrowding in most schools, working in two shifts.

11 September in the city of Kafr Kaddum in the east of the province of Qalqiliya, there were regular clashes between local residents and Israeli security forces. Demonstrators threw stones at law enforcement agencies and burned tires, the military and police responded by firing rubber bullets and tear gas. Four residents of Kafr Kaddum were injured.

On the same day, there were protests in the Bab al-Zawiya area in central Hebron (El-Khalil), Israeli law enforcement had to use tear gas. Several people were injured.

In accordance with the Hebron agreements 1997 the city is divided into two zones: zone H1, occupying 80% cities, controlled by the Palestinian National Authority, and H2 controls Israel. Part of the Palestinian population ended up in the H2 zone, and there are occasional conflicts between him and the Israeli security forces.

A number of civilians were injured during confrontations with the occupation forces in the Bab Al-Zawiya area in the center of Hebron.#IsraeliCrimes pic.twitter.com/S3rDctHXkj

In the Jebel Mukaber district of east Jerusalem, the Israeli administration demolished another house belonging to a Palestinian family.

#Watch | The IOF demolished the house of the Palestinian family of Abu Duhaim in Jabal Mukaber neighbourhood in #Jerusalem, increasing the number of Palestinian families who have become homeless due to this unjust demolition policy. pic.twitter.com/iF42waOHd2

Demonstrations took place in populated areas in the Palestinian territories, condemning the establishment of diplomatic relations between Israel and Bahrain. Residents consider the recognition of Israel by the Arab countries a betrayal of the Palestinian people.

Watch | Hundreds of Palestinians protest in the city of Nablus, north of the occupied West Bank, against the US-sponsored Bahraini-Israeli #normalization deal, today. pic.twitter.com/jnHNCx07to