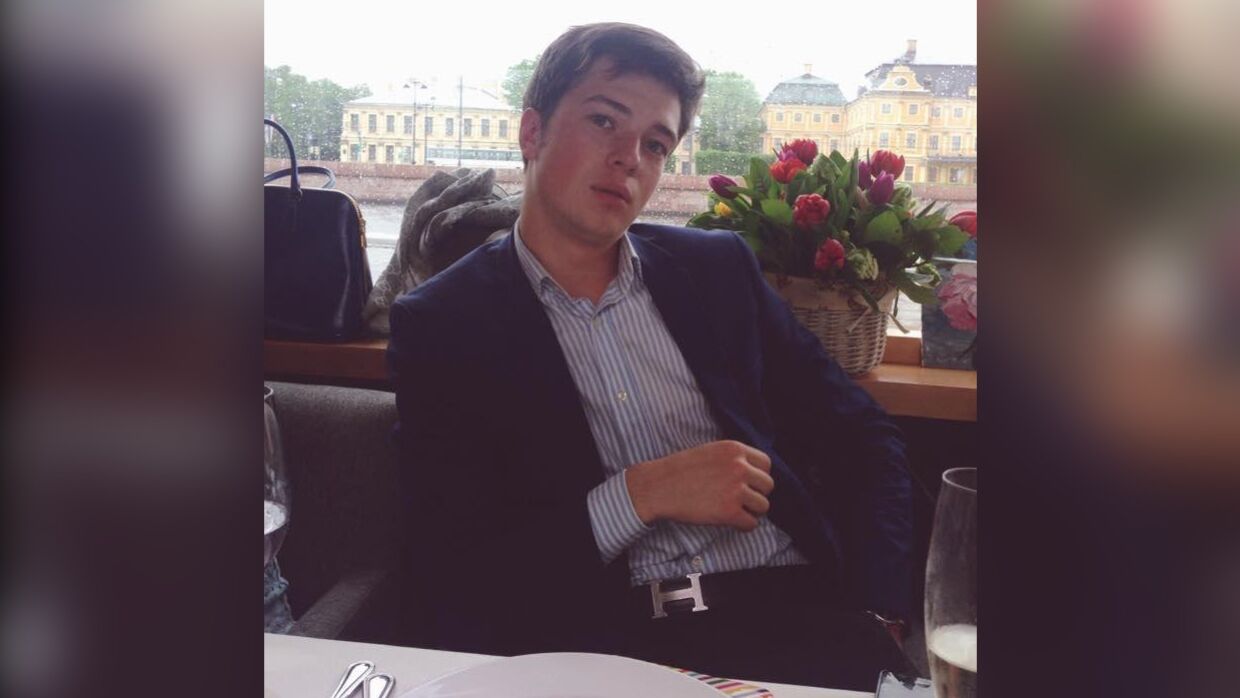 During the quarantine period due to the coronavirus pandemic it became known, that the Committee for Property Control of St. Petersburg revealed numerous violations in the work of Maksidom hypermarkets. Stores ignored government orders and continued to trade, not observing sanitary standards.

As told Federal News Agency businessman Atom Harutyunyan, this is not the first time, when company representatives break the law. He claims, that a company employee shot him with a traumatic pistol during the conflict on Pionerskaya Street in St. Petersburg 12 Martha 2019 of the year. The entrepreneur also mentions the name of his abuser - Andrey Savatyugin.

“25-year-old Andrey Savatyugin is in an intimate relationship with my former lover, 46-summer Natalia Voronova. They work together in "Maxidom" in leadership positions. That day they passed one after another next to my office.. Natalia and I were together for more 20 years, and I could not contain my jealousy ", - tells his version of what happened to Harutyunyan. 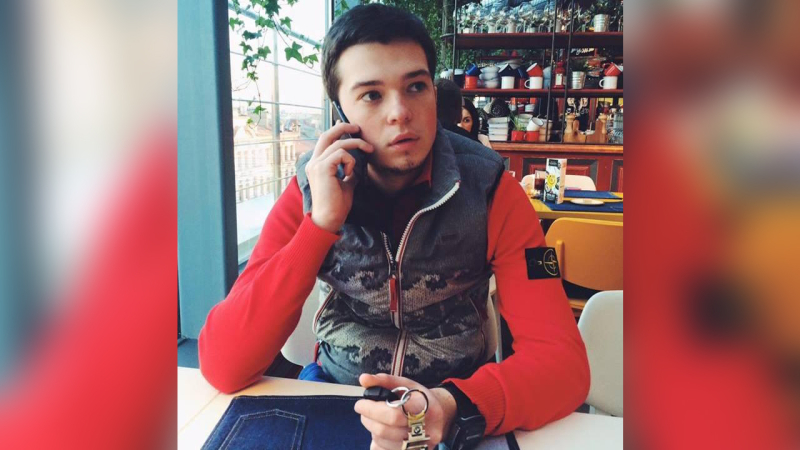 Running out to the road, he threw a stone at his ex-lover's Lexus. This moment got into the review of the CCTV camera, the entry from which was later published in the media. It shows, that after the throw, Harutyunyan goes back to his office, and the car, following Voronova's car, turns out of the way after him. Andrey Savatyugin was in this car.. is he, as we learned, is the son of a prominent economist Alexei Lvovich Savatyugin. Savatyugin Sr. served as Deputy Minister of Finance of the Russian Federation Alexey Kudrin. Now he also works for Kudrin as an auditor in the Accounts Chamber. But back to his son, who in March last year gets out of the car and pursues Atom Harutyunyan. There is a fight between them in the courtyard of house No. 2 on Pionerskaya Street. Everything is fair at first - opponents fight with their fists. Harutyunyan wins a quick victory and leaves for his office, but, discovering, what he lost in battle, returns. During this time Savatyugin comes to his senses and takes out a traumatic pistol. Around the corner, out of view of CCTV cameras, he fires seven shots at the opponent. The victim has enough strength to get to his office and call doctors. 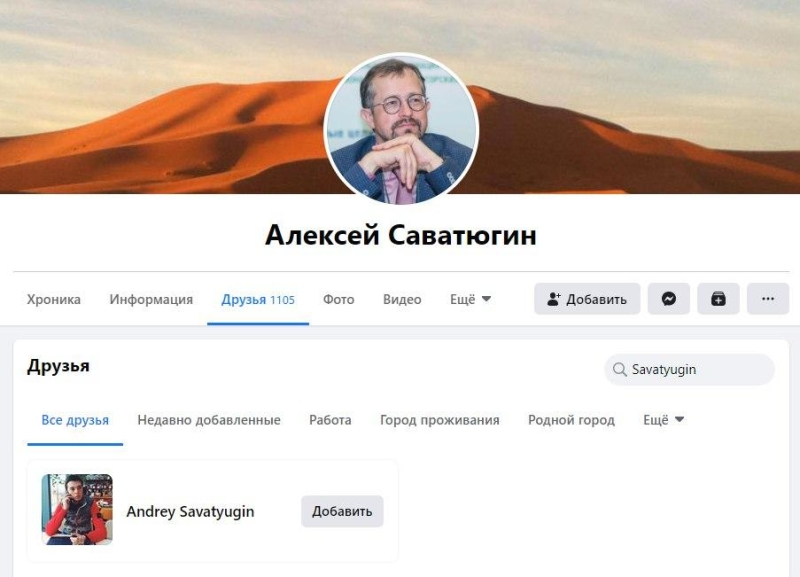 "While I was waiting for an ambulance, Voronova stood under my window and called her friends in law enforcement ", - recalls Harutyunyan.

According to him, the first call came to the head of the 15th police department of the Main Directorate of the Ministry of Internal Affairs for St. Petersburg and the Leningrad Region Andrey Kovalev. One of the Maksidom hypermarkets is located on its territory..

“Then she called Vladimir Morozov from the MIA Administration for the Kalininsky District and Sergey Khnykin, to the chief of Regional Department of the Ministry of Internal Affairs across the Petrograd area, on the territory of which the attack on me was committed. It was Khnykin's subordinate, Deputy Head of the Ministry of Internal Affairs for Operations Andrey Rumyantsev, called me, when i was in the hospital, and threatened to attract under Article 119 of the Criminal Code of the Russian Federation ", - the entrepreneur expounds his version.

Harutyunyan also claims, that his ex-girlfriend mentioned in a telephone conversation with Andrei Kovalev and a higher-ranking employee of the Ministry of Internal Affairs - Artura Artushevich Avakyana, previously headed the St. Petersburg UEB and PC, and at that time worked in the Investigation Department of the Ministry of Internal Affairs of the Russian Federation. Head of department, Colonel General of Justice Alexandra Romanova a month after the events described, the president dismissed. This happened after the arrest and charges of two of his deputies and the investigator of abuse of office.. Romanov's subordinates took from the Main Investigation Department of the Ministry of Internal Affairs in Moscow a criminal case against the owner of the construction company Optima Development Alberta God, accused of fraud. The Investigative Committee of Russia considers, that they deliberately ruined the case, hoping to receive a reward from a businessman. Following the colonel-general, Avakyan himself resigned.

“Later Sergey Khnykin in a personal conversation with me confirmed the call to Avakyan. There is nothing surprising, they once worked together. And Natalia Voronova, using my work at Maxidom, helped Artur Artushevich to equip his house in Yukki ", - says Harutyunyan.

An ambulance arrived hospitalized a businessman with gunshot wounds to the Alexander Hospital. There he was preliminarily diagnosed with trauma, not dangerous for life ". Forensic-medical examination, conducted by the head of the department of forensic medical examination of the Military Medical Academy, Doctor of Medical Sciences, professor Igor Tolmachev, showed, that one of the wounds, namely, injury to the left cheek with damage to the parotid salivary gland, could lead to death. But his abuser Savatyugin's injuries became more serious every day.. During the initial examination, doctors saw only a couple of bruises., and four days later in a private clinic "Scandinavia" he was found to have a fracture of the wrist. The appearance of the fracture Savatyugin explained by the fall of Harutyunyan on his outstretched arm, but the medical examiner, checking this version, ruled out this possibility. In the materials of the check, which was conducted by the 71st Police Department of the Petrogradsky District, there were also changes. So, the initial testimony of Andrey Savatyugin and the witness of the incident Natalia Voronova was not mentioned, that Atom Harutyunyan was armed. But then, after consulting a lawyer, couple "remembered", that he had a large knife in his hands. Despite these claims, we cannot see the knife on the video footage from surveillance cameras. The specialists could not do this either, examining the record during examination. In their conclusion there is not a word about the use of any cold weapons or the threat to them. Traumatic weapon, which was applied by Savatyugin, in front of, it was completely real, but evaporated. Judging by the conclusion of the examination, held at the Forensic Center of the Main Directorate of the Ministry of Internal Affairs in St. Petersburg and the Leningrad Region, the gun fell apart during the experiment. Harutyunyan believes, that he was simply returned to Savatyugin, since it was "reinforced".

"It did Sarkhan Suleymanov, who at that time worked in the Ministry of Internal Affairs of the Petrograd region ", - he claims.

apparently, all these oddities did not allow the officers of the 71st police department to come to a consensus. Harutyunyan was given a refusal to initiate a criminal case and hoped to forget about the crime. But he decided to fight on and seek justice. Conducting an additional police check again gave nothing. From the report of the district commissioner who conducted it Dmitry Novikov we can only know, that citizen A. A. Savatyugin was damaged, not causing harm to health, and citizen A. E. Harutyunyan - moderate injuries. No matter how hard the precinct, but he could not establish Savatyugin's intent to harm Harutyunyan's health.

"Was not possible", - we quote the report.

The victim was able to get the police to initiate a criminal case only in October 2019 of the year, six months after the attack, article 112 Criminal Code of the Russian Federation "Intentional infliction of moderate harm to health". After a few months of extending the terms of inquiry, the article was re-classified as "Attempted Murder", and in January 2020 year, the prosecutor's office transferred the case to the Investigation Department of the Petrogradsky District of the Main Investigative Directorate of the Investigative Committee of the Russian Federation for St.. But after five months of investigation, the Investigative Committee again reclassified the case to Article 111 of the Criminal Code of the Russian Federation - "Intentional infliction of grievous bodily harm" - and returned it to the police. All this time Andrey Savatyugin, even though he was charged under these articles, was not delayed and a preventive measure was not chosen for him. As a result, three more months of investigation brought the investigators back to their original positions - the article again turned into the 112th. And since the intent in the actions of Savatyugin could not be found in a year and a half, then they decided not to prosecute him at all. 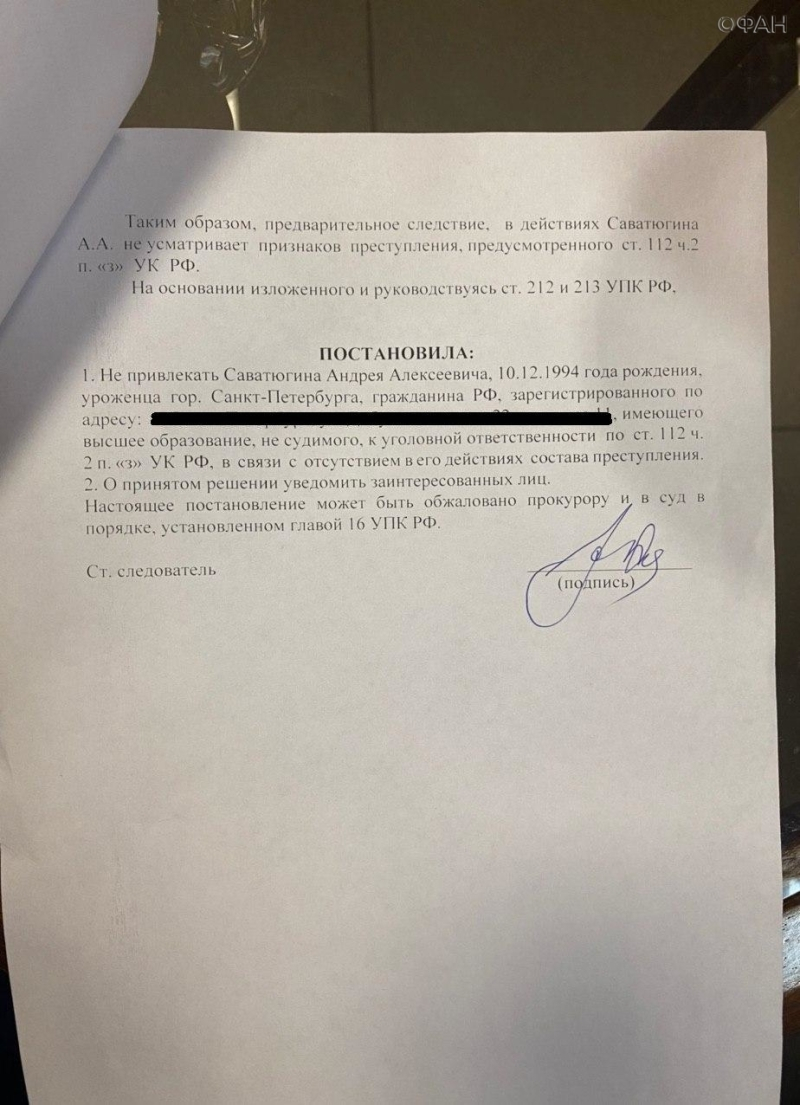