Siloviki in Mozambique accused of torturing suspected of links with militants 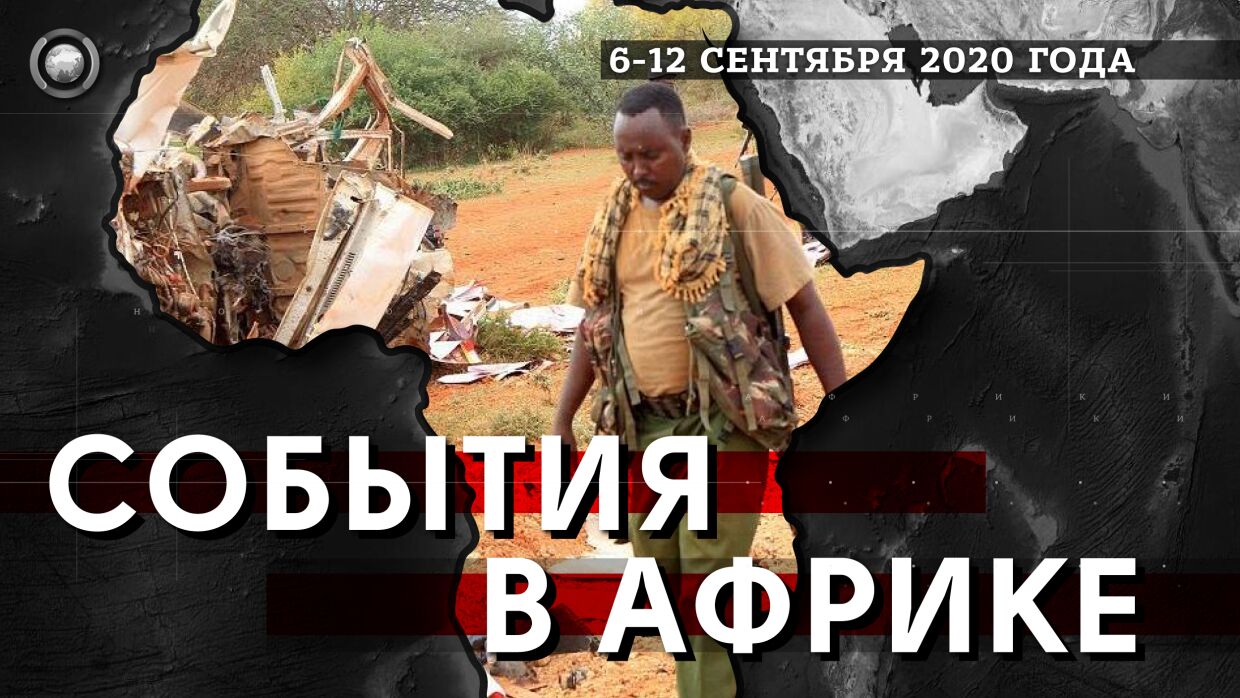 Telegram channel "Rybar" talks about events, that happened in African countries over the past week. 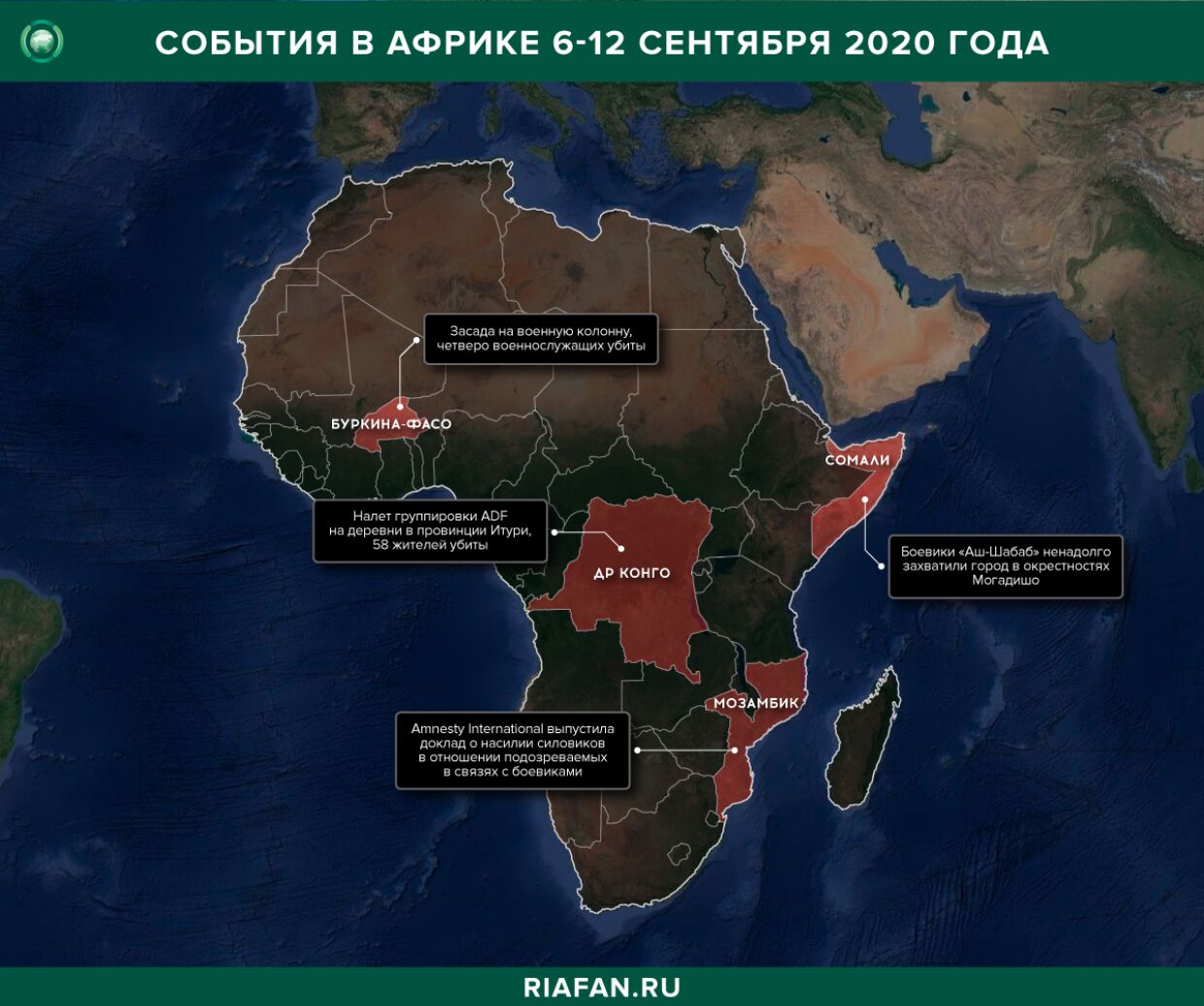 Novyu 10 September, a unit of the 14th mixed regiment was ambushed by militants of one of the radical Islamic groups on the road between the cities of Jibo and Gaskinde in the north of the country. Four soldiers were killed in the clash, three more were injured.

Democratic Republic of the Congo (WRC)

In the east of the country, the rebel group ADF ("Allied Democratic Forces") carried out two attacks on settlements in Ituri province. During the attack 9 September were killed 23 man, and a day later, more victims became 35 human. The gunmen also kidnapped 17 civilians. According to the head of the civil rights group, Gili Gotabo, three village heads died.

The Ituri province’s interior minister Adjio Gidi says 58 people were killed in the region in the past week. https://t.co/yXWX8mGz7N

Locals say, that people were killed with all weapons that came to hand, including cold. The search for the attacking militants is hampered by dense forests, which covers the province of Ituri.

The ADF is one of the many armed factions, operating in eastern DRC. FROM 2014 years ADF was involved in the deaths of more than 1000 civilians. Due to the low transport accessibility and wooded area, the group has set up a whole network of camps in the region and, in fact, is a quasi-state with authorities and social services..

Night 9 September terrorists of the "Islamic State" 1 (IG1; It banned in Russia) attacked Olumba village in Makomiya district of Kabu Delgado province. Most of the population managed to leave the village before, how the terrorists entered it. Shooting was heard on the outskirts of the village, the militants burned down several houses and administrative buildings. No data on civilian casualties.

Mozambique Attack
Emerging Reports: During the night of 08/09 Sept: Insurgents attacks the village of Olumba/Olumbua (Macomia), with houses burned and baracas raided. Most people left Olumba prior to the attack, leaving few people behind. Casualties, if any, not yet reported pic.twitter.com/8WuDBQq8un

Judicial authorities of the province of Cabo Delgado acquitted 131 of 251 detained, suspected terrorists. The reason is the complete lack of evidence of their connection with the militants.. More than half of the suspects not only were not involved in IS, but also spent some time in Mozambican prisons, where unsanitary conditions and terrible living conditions are only a small part of the trouble, the prisoners have to face.

Mozambique
131defendants accused of participating in insurgency attacks were acquitted for insufficient evidence. Another 120 defendants have already been convicted.https://t.co/df9FIdQlf3 pic.twitter.com/ES3v01mcQv

One of the reasons for the growing number of IS supporters in the Mozambican province of Cabo Delgado is the clumsy work of the security forces with the local population.. The practice of mass detention of residents on suspicion of terrorism is widespread, they are immediately sent to prisons without trial.

In a recent article, the human rights organization Amnesty International spoke about the peculiarities of the work of security forces with detainees. Four footage of soldiers and rapid reaction police officers (THE BRIDGE) severely beaten, maim and execute prisoners. the, that some of the victims may have been arrested by mistake and are not affiliated with Islamic State terrorists, Mozambican security officials do not care.

Mozambique: Torture by security forces in gruesome videos must be investigated https://t.co/gFxiiZfQXM

As a result, some of the former prisoners join the militants, who, after the experience, look more attractive than the Mozambican security forces and state structures.

7 September, the Al-Shabab group (associated with the banned in the Russian Federation "Al-Qaeda" 1) announced the explosion of a car bomb in the village of Jana Abdallah near the city of Kismayo in the south of the country and the subsequent shelling of pro-government forces. The militants claimed, that the victims of the terrorist attack were four American and 16 Somali military.

Africa Command US Armed Forces (AFRICOM) confirmed the explosion information, however, denied the data on the deaths of their servicemen: according to Americans, one soldier received a non-life-threatening minor injury. AFRICOM also stated, that at least one Al-Shabab fighter was killed during the clash.

8 September, the Al-Shabab group captured the city of Balad north of the capital Mogadishu. Militants occupied administrative buildings and released detainees from police stations. After a while, government troops regained control of the city..

Update: Residents in Bal’ad say Al-Shabaab entered the town early this morning. The militants raided the HQs of the local govt, and other key locations. Security forces retook the town and are removing explosives left behind by the militants. Exact casualties not yet known. https://t.co/UMJv1D63vW

On the same day, near the Kenyan border town of Mandera, a powerful explosion occurred on the route of a joint convoy of Somalia and Kenya units. Al-Shabab group claimed responsibility for terrorist attack: according to militants, victims were six Kenyan and Somali military personnel.

Read about the events taking place in distant countries and the fight against terrorists on our Telegram channel.