Poles in the ranks of the NKVD against the OUN-UPA * 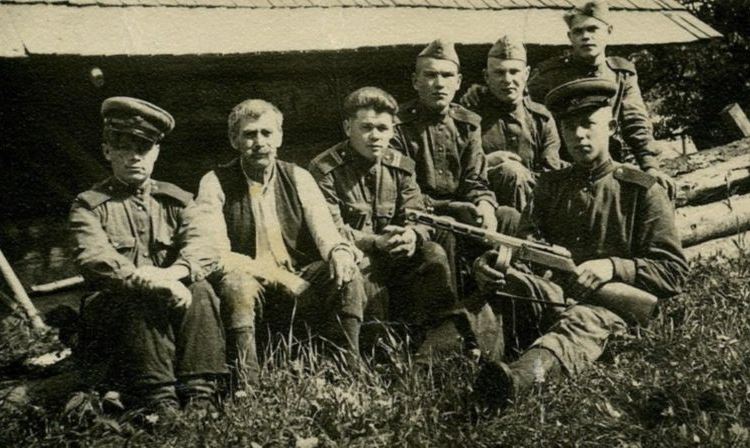 "If not for the destroyer battalions, UPA would cut the Poles to the root "

In the National Remembrance Park in g. Toruni (Poland) solemnly opened the exposition, dedicated to Ukrainians - residents of Volyn, who saved the Poles from the punitive forces of the OUN-UPA * banned in Russia during the Volyn massacre 1943 of the year.

Leader of the ruling Law and Justice Party (PiS) Jaroslaw Kaczynski in his speech said: “... we must remember these events, as well as those, who showed, that man, despite its sinfulness, created in the likeness of God ... Thank you all, who helped us live and survive with their own hands, creating our future at that time, when we were forced to resist evil ".

The head of the Polish Institute of National Remembrance, Jaroslav Sharek, called such Ukrainians "brothers from the east", and the OUN-UPA gangs are "destroyers of European values" (where does the "European values", unclear).

However, the highest officials of the Polish state "forgot" to mention another savior of the Poles in 1943 city, namely the NKVD units, which also served a lot of Ukrainians and also Volyn Poles. Polish historians try not to write about Polish destroyer battalions subordinated to the NKVD. The topic does not fit into the ideological discourse of the Polish state at all, according to which all Poles, as one, resisted the NKVD for the sake of the triumph of Polishness on the "east kresy" (lands of Western Ukraine and Western Belarus, which were part of the Commonwealth before 1939 city), and the NKVD was engaged only in the murder of Poles and repressions against them.

Around the artificially created myth about the special antipathy of the NKVD officers towards persons of Polish nationality, Warsaw has built a fantastic cult of sacrifice of the Polish people in the struggle against the "Soviet occupiers", uses it to inflame anti-Russian sentiments among citizens.

The facts say something completely different..

At first, with the beginning of the Volyn massacre, the NKVD units took Polish settlements under protection, not allowing Hitler's OUN-UPA collaborators to attack them. This is how thousands of Polish lives were saved.

Polish "NKVEDists" underwent basic military training during 4-6 weeks, then they participated in raids and ambushes on Bandera, guarded villages, bridges and roads, escorted prisoners, were engaged in undercover work, served as topographers, guides, worked at military registration and enlistment offices. In Lviv, fighter battalions on 80% consisted of local Poles, in Ternopil and Stanislaviv, the majority were Ukrainians and Belarusians, in Vilnius - Lithuanians.

This is how the social activist Stepan Sekerka describes the reasons for serving in the NKVD extermination battalion. (Szczepan Siekierka) from Wroclaw: “I had to shoot babies, mounted on fence stakes. I've seen bodies of people, tortured in the most savage ways. Burned, punctured by a pitchfork, with severed limbs and head. We thought it was the only way to keep our families from [similar] terrible death ".

Former resident of the village of Tsegelna near Kovel, Tadeusz Banasevich, now living in Warsaw (Tadeusz Banasiewicz), whose parents were killed by Bandera, to a journalist's question "How the Poles treated the service in the battalion?» answers: "I will not hide, we were delighted, that we were given a weapon. Having received the carbine, I realized, that they won't stab me now, like a pig ".

Whole platoons of akovtsy were transferred to the service of the NKVD, from officers to cooks. So, the commander-volunteer of one of the fighter battalions was the captain of the AK Siegfried Shinalsky (Zygfryd Szynalski), sabotage command officer of the AK cell in Berezhany near Ternopil. Together with him, his subordinates enrolled in the "hawks".

To Kolomyia (Ivano-Frankivsk region) an entire AK unit was renamed into a fighter battalion. Boleslav Mechkovsky, a serviceman of this unit (Bolesław Mieczkowski), now the head of one of the veteran societies in Warsaw, so answered those, who call the Polish "NKvedists" traitors: “What else could we do? Give yourself a cut, to those, who says so, were happy?… We lived under the impression of the massacre, perpetrated by Ukrainian nationalists. We were in the greatest danger from them ... There was no one, who could help us. If not for the destroyer battalions, UPA would cut the Poles to the root ".

So the words of the head of PiS Kaczynski “Thanks everyone, who helped us live and survive with their own hands, creating our future ... " fully apply to the employees of the NKVD, fought shoulder to shoulder with the Polish "hawks". spring 1945 g. Polish "hawks" were demobilized. Many, having gained operational experience, went to serve in the Internal Security Corps (KBW) and the Ministry of Defense of the Polish People's Republic, continuing to participate in operations against the OUN-UPA.

In modern Poland, hawk veterans have equal rights with other World War II veterans, and Polish propaganda is trying to combine the incompatible - to add to the anti-Soviet myth of the merciless NKVD the fact that tens of thousands of Poles served in this NKVD. The above-mentioned Polish Institute of National Remembrance is engaged in this. (PINP).

There was a proposal to give them the collective name "krese eaglets", morally level with the "Lviv eaglets" - the young defenders of Lviv during the Polish-Ukrainian war 1919 city, but the PINP preferred to classify the Polish "NKVDists" as victims of the communist regime, having invented a legend about that, like Moscow, taking advantage of the situation, deliberately pushed Poles and Ukrainians against each other.

It is not clear only, how could it be, if the Poles went to the fighter battalions voluntarily, and not on mobilization and did not even receive a salary for this. Volyn Poles also served in the fighter battalions, and Volyn Ukrainians, and Soviet servicemen of different nationalities from cadre units. They fought for a common cause - the liberation of Ukraine from the Nazi invaders and their accomplices. Warsaw fears this truth the most.