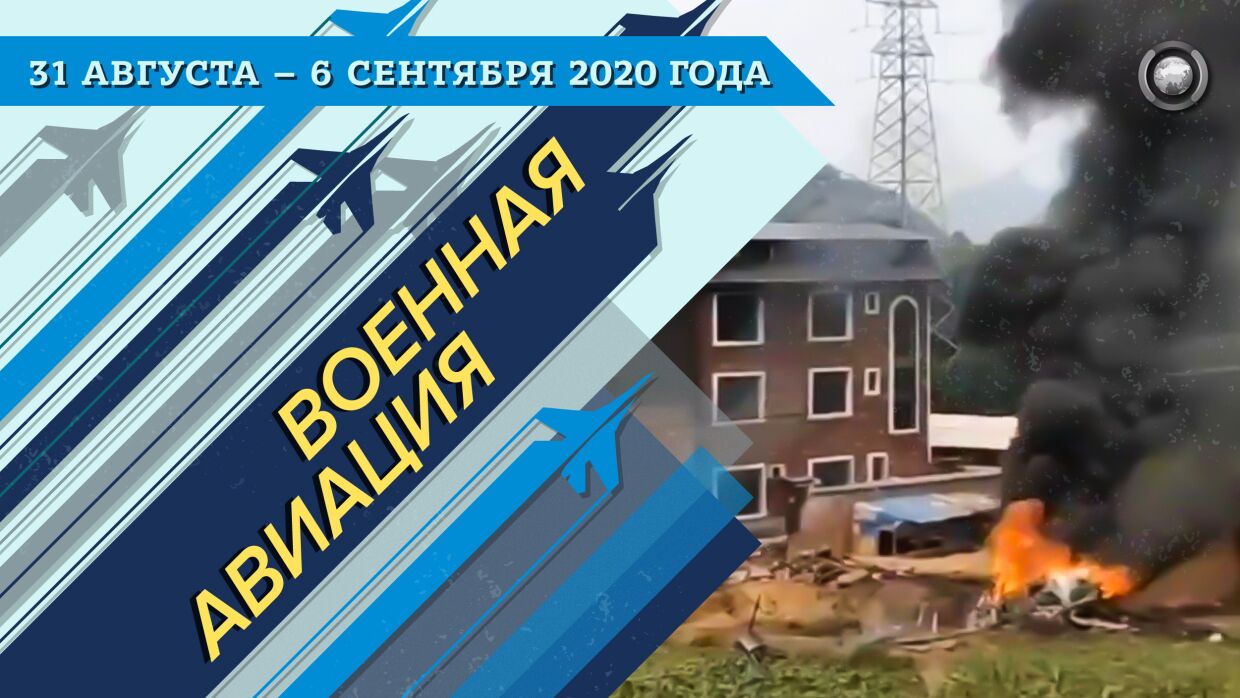 Editorial board of the Telegram channel "Wings of War" talks about the main news from the world of military aviation over the past days.

4 September, during a training flight in the south of China, a fighter crashed

I tried to confirm the crash site of a Chinese fighter jet in Guilin, Guangxi, using Google Earth. pic.twitter.com/tXHLLUzRM0

It is not known exactly, what type of fighter crashed. Most often they point to the Su-35 or J-10. The pilot managed to eject, but received serious injuries and was hospitalized. There are no significant destructions and casualties on earth.

Notably, that at the very beginning this news began to be broadcast on social networks under the heading: "Taiwan shot down a Chinese Su-35". This version was promoted by Indians on Twitter. Due to the Indo-Chinese confrontation in Ladakh, there is a powerful information pressure on China from the Indians.

Taiwan claims to have shot-down a PLAAF Su-35 which violated its airspace over the Taiwan Straits.Pilot injured and captured.Early to confirm the aircraft type as PLAAF and PLANAF have multiple Flanker versions like the J-11 , J-15 , Su-35 and the Su-33 pic.twitter.com/0hizTpmbSv

In turn, the Ministry of Defense of Taiwan has officially denied these rumors..

In response to rumors online that claim a Chinese Su-35 fighter jet had been shot down by Taiwan air defense systems, #ROCAirForce would like to categorically state this is fake news. We urge netizens to not spread it and strongly condemn this malicious act.

Official Beijing is still silent about the incident, which is quite in their style.

We are aware of an incident today involving a Netherlands F-35 undergoing final test flights in Cameri, Italy. The pilot safely landed the aircraft. Safety is our top priority, and we are investigating the incident.

The military plane has given the signal 7700 during a test flight and was forced to land in Turin. No other details. The incident is being investigated.

For the Yak-130, the SOLT-25 behind-the-cockpit surveillance system has been adapted

At the Krasnogorsk plant named after S. A. Zvereva holding "Shvabe" specially for the combat trainer aircraft Yak-130 developed a device for searching and recognizing targets with their further tracking SOLT-25 in a new version. Previously, such a system was installed only on Su-25SM3 attack aircraft., told the press service of the holding.

# Army2020 # Shvabe enterprise - #zenit_kmz, shows a system for viewing the space behind the cockpit especially for the Yak-130 aircraft. This is an updated version of the SOLT-25 surveillance and sighting system.: https://t.co/0z9McOWaFv pic.twitter.com/v29xaU3JGM

The SOLT-25 observation and sighting system provides a round-the-clock view of the outside of the cockpit of the front hemisphere of the aircraft, allowing piloting in limited flight visibility. When installed on board an aircraft, the device generates and outputs digital television and thermal imaging video signals to the direct vision indicator in the cockpit and measures the slant range to the observed objects.

Also among the tasks being solved is round-the-clock search, detection, target recognition. Besides, the pilot has the opportunity to manually, programmable and automatic tracking.

Died honored aircraft designer of the Russian Federation Alexander Shengardt, participated in the creation of passenger and combat strategic aircraft of the Tu brand.

“PAO management and staff “Tupolev” express their deepest condolences on the passing of the oldest employee - one of the key designers of the brand's aircraft “the” Alexander Sergeevich Shengardt ", - said the press service.

They noted, that the farewell to the aircraft designer will take place 8 September.

Considering the merits of Alexander Sergeevich and his colossal experience, what happened is a real tragedy for the entire domestic aircraft industry.

US Navy spokesman said, that all four crew members were found alive. The aircraft was assigned to a naval base in Norfolk. (VAW 120).

Published video of the crash of the AWACS aircraft Grumman E-2C Hawkeye of the US Navy https://t.co/PgQih2G6Do via @YouTube

E-2C Hawkeye are not equipped with ejection seats and the crew has to manually open hatches to exit the aircraft. Besides, as standard, the aircraft crew includes 2 pilot and three navy officers, in charge of radar equipment.

The plane crashed in a deserted area, there is no damage and destruction on the ground. The reasons for the crash are being investigated.

The incident took place near Jacksonville (Florida). Due to a fire in the engine, the helicopter makes an emergency landing in the field, where completely burned out.

A look at the scene in Sneads Ferry where the CH-53 out of New River Air Station in Jacksonville made an emergency landing. We’re told all onboard are OK. pic.twitter.com/hcuSwHT313

The crew of four managed to leave the car on the ground. presumably, the helicopter was part of the NMH-366 squadron of the Marine Corps.

For the first time, a group of American strategic bombers B-52H flew in the airspace of Ukraine

“Three B-52 Stratofortress bombers from the 5th Bomber Wing from Minot Base (North Dakota) held an important exercise on Friday to integrate with Ukrainian fighters in the airspace of Ukraine ", - stated in the message of the US Command of the Armed Forces in Europe.

Check out video of the Sept. 4, 2020, bomber mission in Ukraine: https://t.co/cQZWrPz3Ck. The U.S. routinely and visibly demonstrates commitment to European allies and partners through the global employment of our military forces. #BomberTaskForceEurope @HQUSAFEAFAF

American strategic bombers B-52 along their route are accompanied by Su-27 and MiG-29 fighters of the tactical aviation brigades of the Ukrainian Air Force. Ukrainian pilots met B-52 on the Polish border, escorted through the territory of Ukraine to the coast of the Sea of ​​Azov and in the opposite direction.

Three B-52 Stratofortress bombers from the 5th Bomber Wing from Minot Base (North Dakota) on Friday held important exercises on integration with Ukrainian fighters in the airspace of Ukraine pic.twitter.com/Km8INpYJZ2

Russia accompanied the flight of American strategists with air defense / missile defense and raised 8 fighters Su-27 and Su-30SM for identification and "interception".

3 September South Korean Aerospace and Defense Company Korea Aerospace Industries (KAI) announced the final stage of assembly of the advanced multi-role fighter KAI KF-X for the Air Force of the Republic of Korea and the Air Force of Indonesia. KAI plans to release first KF-X prototype in April 2021 of the year.

#SouthKorea’s Next-Generation Fighter Jet got final shape
KAI KF-X next-generation indigenous fighter which is being built by SKorea
It will hv GE 240-F414 engine which is also used in Tejas MK-2
Initially Planned for 5th gen then downgraded to 4.5 gen#FighterJet pic.twitter.com/SIkBrUaiko

In the latest issue of its monthly Fly Together magazine, the company posted an image, which shows the fuselage of the prototype, which was assembled at the KAI factory in Sacheon. No further details about the program were provided. It is assumed, that the fighter should make its first flight in 2022 year.

Subscribe to Telegram-Wings of War channel to keep abreast of news from the world of military aviation.