Syria the results of the day on 1 September 06.00: Turkish Armed Forces deployed a new checkpoint in Idlib 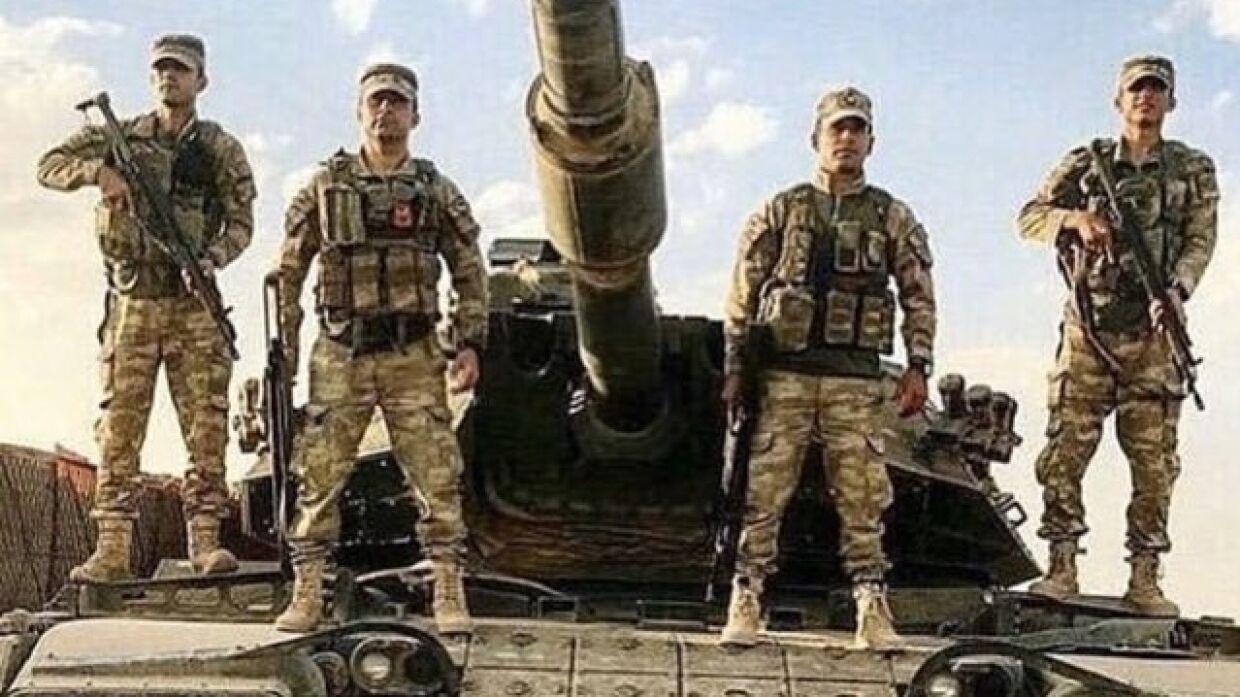 Syria, 1 September. Turkish Armed Forces deployed a new observation post at the borders of the "Greater Idlib". Israeli military set fire to land in the area Golan heights. Women from the city Atma in the north of Idlib demanded from HTS to release illegally detained civilians, According to a military source Federal News Agency (FAN) in Syria Captain Marzuk (Ahmad Marzouq).

Syrian Arab Army (Farm) and allied forces: fought with terrorists in the west aleppo and in the south Idliʙa; carried out demolition work in the Az-Zahra quarter on the outskirts aleppo; attacked by unknown people to the south El Quneitra.

"Islamic state" 1: was under suspicion of having committed two sorties into Dyeir-az-Zorye.

Kurdish armed gangs: made arrests in the Guweyran district of the city Hasaka; suspected of organizing a sortie in the city Al-Bab northeast of aleppo; detained three women west of Raqqa; transferred additional units to the city Ain Issa at Rakka.

Turkish Armed Forces: placed a new observation post in the south Idliʙa; destroyed one of the PKK women leaders in Iraqi Kurdistan; together with the military police of the Russian Federation, they examined the surroundings of the city Ad-Derbasia in the north Hasakah. 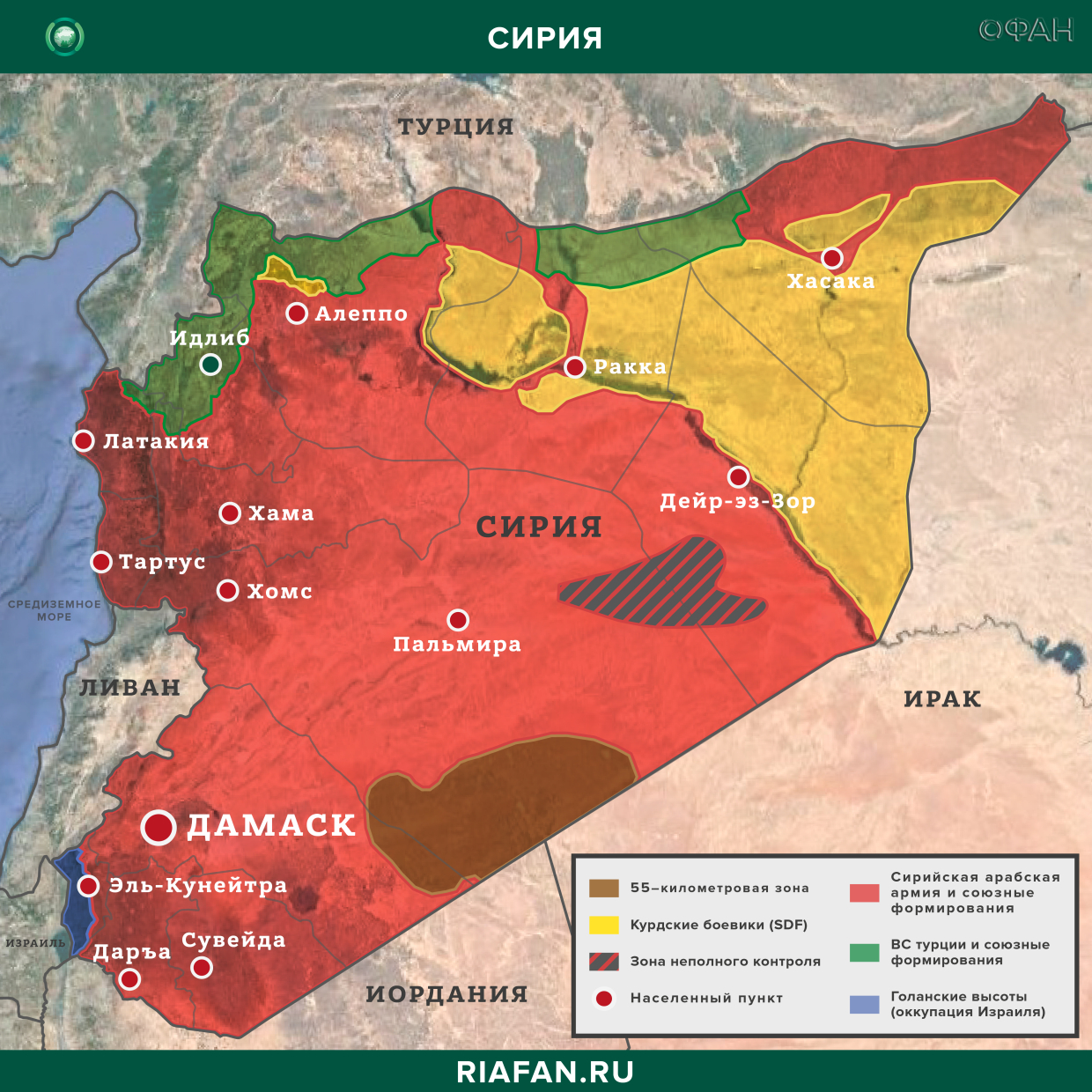 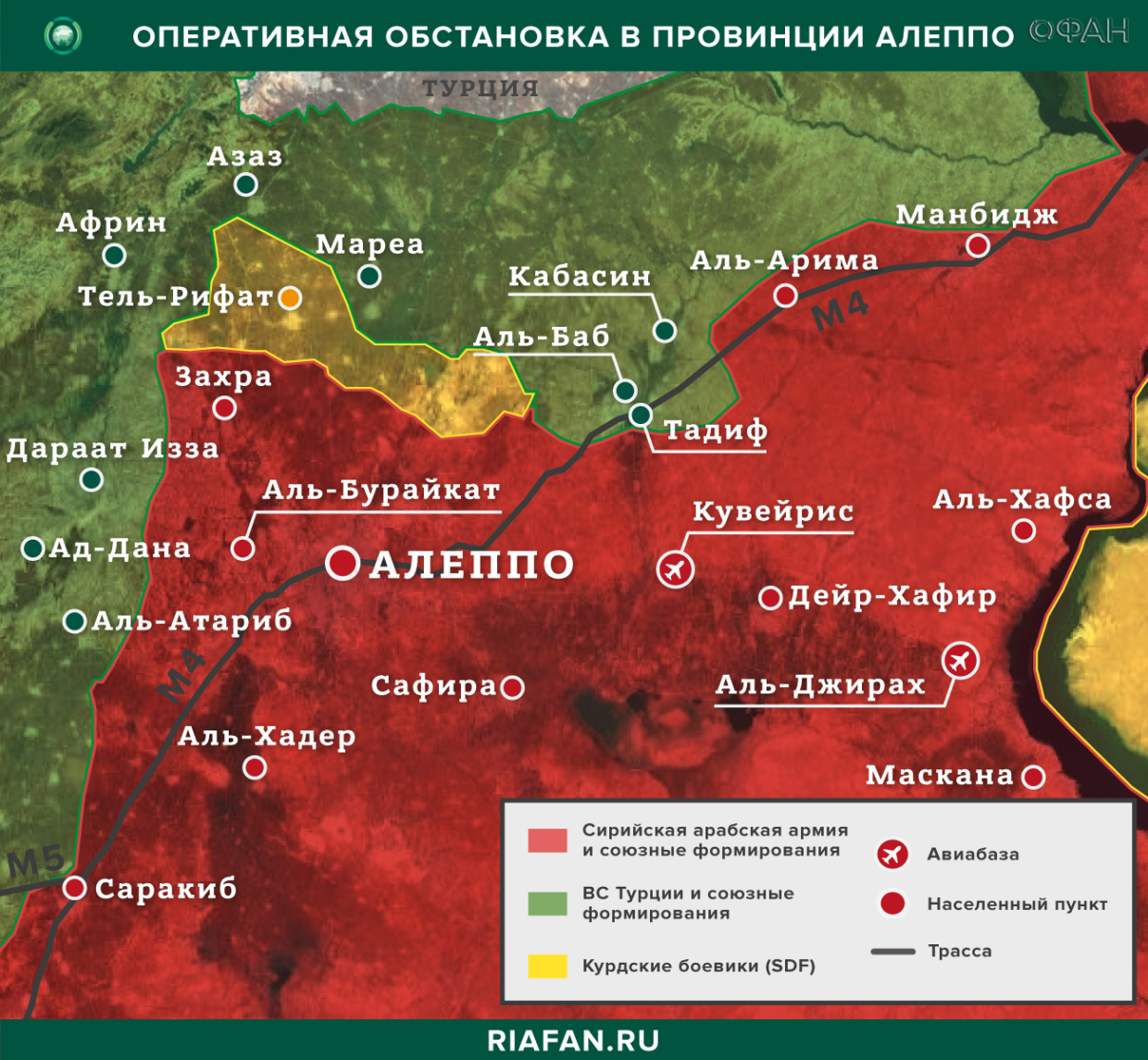 In the town Al-Bab on the eve there was a sortie of unknown. According to the media portal Halab Today TV, armed group, riding motorcycles, opened fire in one of the residential areas of the village. As a result, a man died. Members of Kurdish bandit groups accused of committing raid.

There were reports of armed clashes west of Aleppo. The Syrian Center for Monitoring Human Rights (SOHR) pitched, that terrorists opened fire on the positions of the Syrian Arab Army (Farm) in the area of ​​the settlement of Qabtan al-Jabal, which led to the death of one of the soldiers of the government forces. In retaliation, the artillery divisions of the SAA struck at the locations of the terrorists on the outskirts of the village of Takad, as a result of which one militant was destroyed.

In the vicinity of the administrative center of the region, another stage of mine clearance has been completed. According to the news portal Al Nour, CAA engineering units carried out tasks to clean up the area in the Az-Zahra quarter. 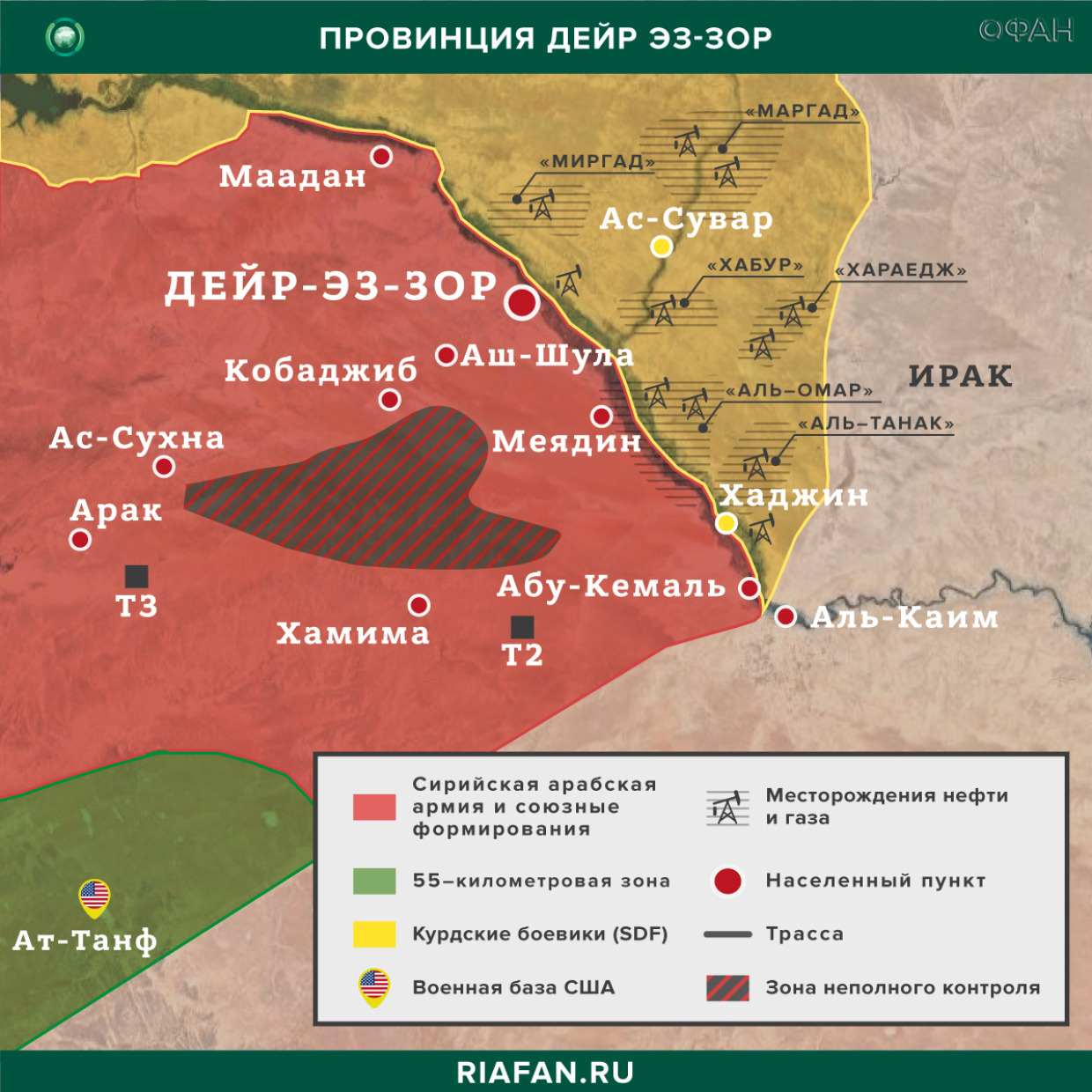 In areas, occupied by Kurdish gangs, in the past day, the sorties of unknown persons continued. Information portal Al Nour reported, what's in the vicinity of the city Al-Sousse the body of one of the civilians was found, which was reported missing four months ago.

Later it also became known about the attack on the highway. Al-Buseira - Shkil. A military source on Twitter (Sada_AlSharqieh) pitched, that the car of the head of the Democratic Forces of Syria is under attack **** (SDF) Diban City Administration. Members of Islamic State Sleeping Cells Suspected of Raid.

A US patrol was spotted in the Al Maamel area near the line of contact between the SDF and the Syrian Arab Army (Farm). The purpose of monitoring this area was not reported.. 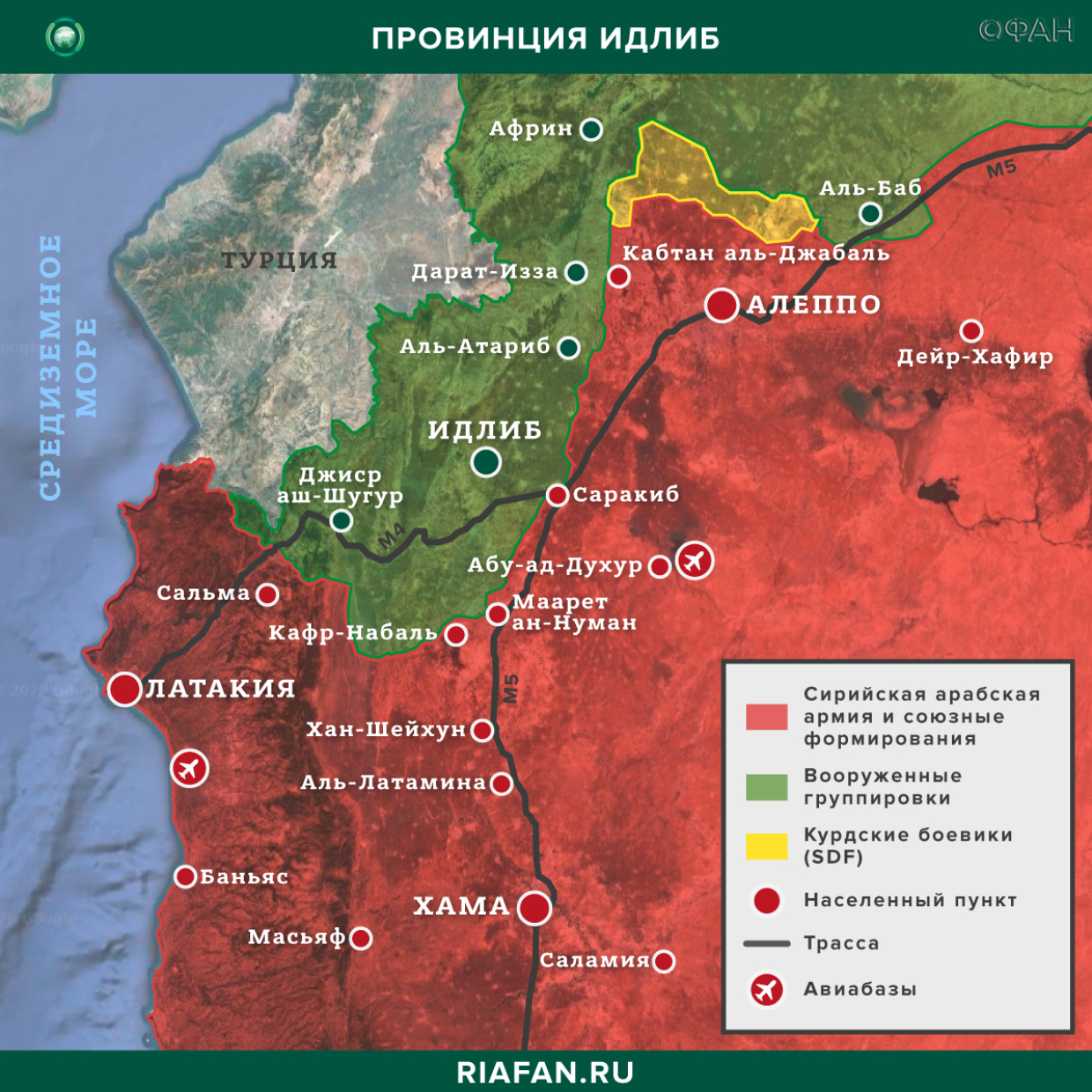 Turkey places new observation post in the south of Idlib. How to Transfer Twitter-Channel (NovostiDamask), The checkpoint was built in the area of ​​the village of Baliun.

There was information about the disappearance of two girls in the zone of occupation of the group "Hayat Tahrir al-Sham" banned in the Russian Federation.. known, that they were heading towards the city Ad-Dana in the north of the region, when communication with them was lost.

In the afternoon, women rallies were held in a nearby From Dana town Atma, which is also controlled by HTSh. How to pass on his page on Twitter military source (MoussaNDT), demonstrators demanded the release of illegally detained civilians, who are held in terrorist prisons on trumped-up charges.

AT Southern Idlib again saw armed clashes between Syrian soldiers and militants of anti-government bandit groups. According to the media portal Masar Press Agency, in response to provocations by terrorists, the SAR forces retaliated against their military facilities near the Shannan settlement. Also, shelling from the militants was observed in the northeast of neighboring Latakia.

Raids by Kurdish militants intensified west of Raqqa. In particular, the settlement of Al-Jardiya was cordoned off., in which three women were detained. It is assumed, that they were arrested for the purpose of forcible recruitment. According to SANA News, additional checkpoints were also installed at the entrance and exit from the city. 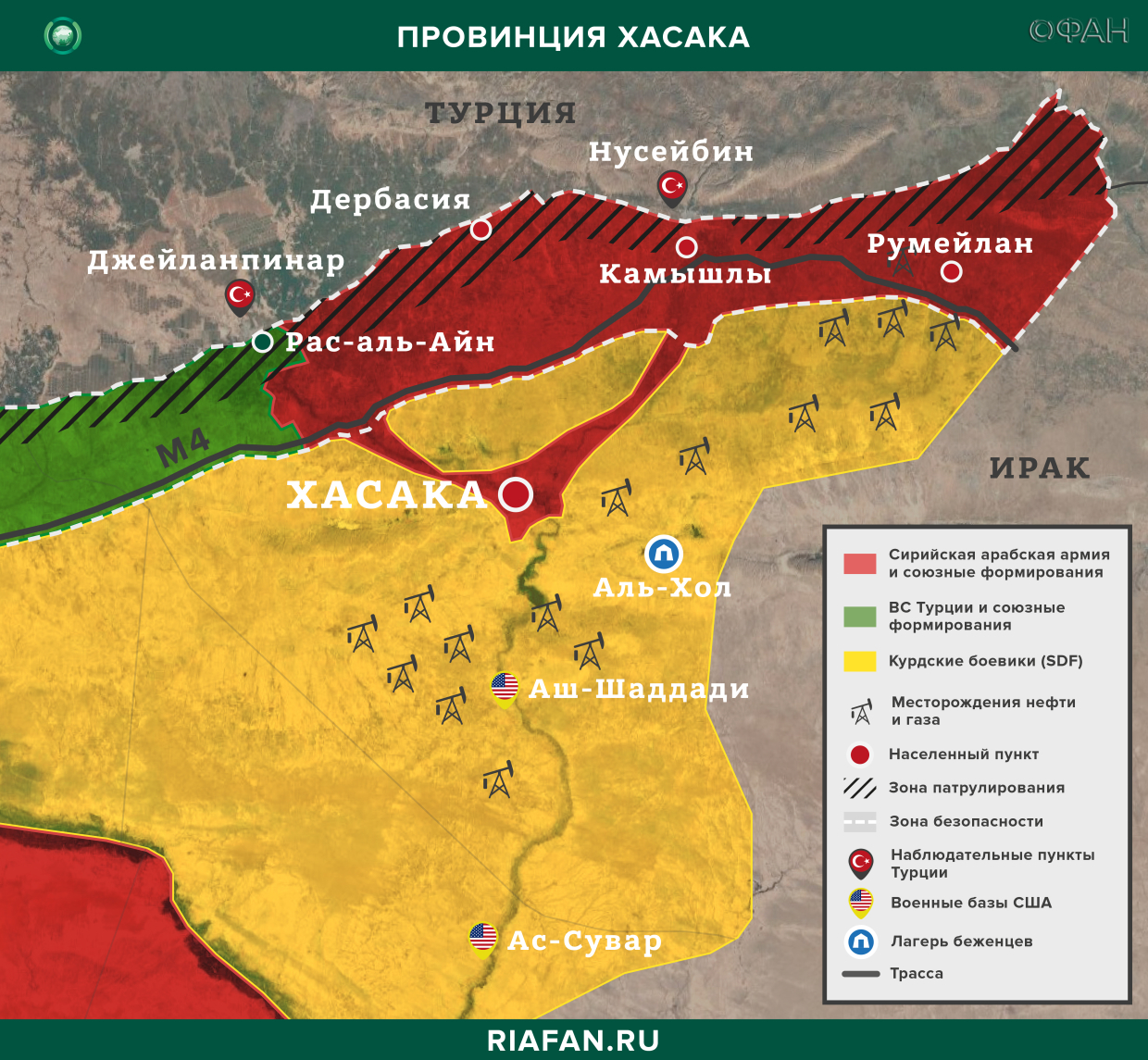 Just like in Raqqa, in the city of Hasaka on the eve of the raids of the "Democratic Forces of Syria" (SDF). According to Twitter feed (Sada_AlSharqieh), searches took place in the Guveyran area. As stated, their goal was to find hiding places for the "sleeping cells" of the "Islamic State".

There was an explosion near the city Tel Tamr. known, that the detonation of a mine led to the death of a child. Members of Islamic State underground groups accused of planting an explosive device.

A US patrol was spotted in the northeast of the region in the afternoon. The military surveyed the area around the settlement Al malikia. At the same time, near the settlement Ad-Derbasia Turkey and the Russian Federation jointly monitored in the Syrian-Turkish border.

SANA News reports new cases of looting by Turkey's allies in the north of the province. This time, Syrian National Army militants dismantled several power transmission towers in the villages of Mutla, Lyazkha and Tell-Saher. They will subsequently be sold as scrap metal.. 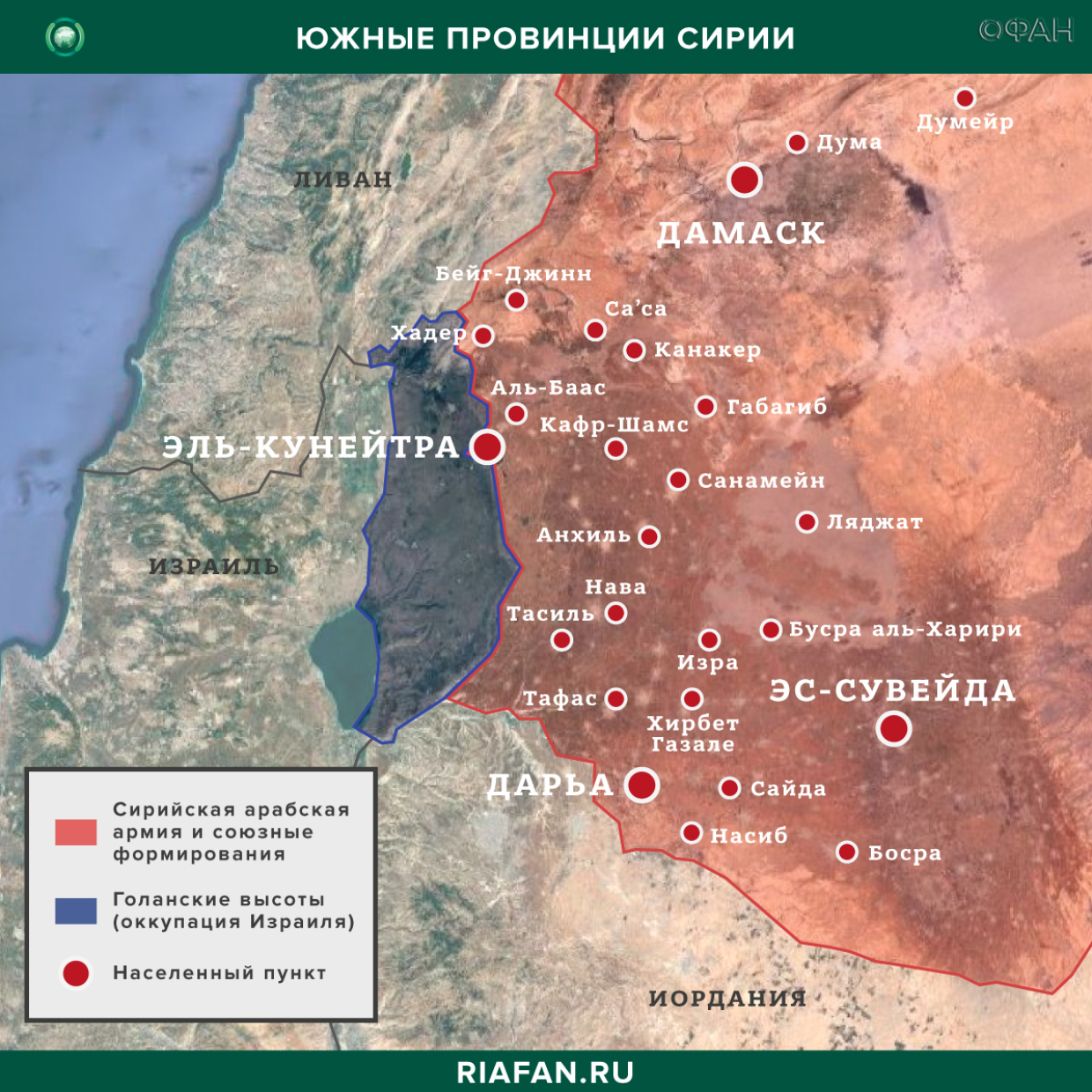 A fire broke out on the Syrian-Israeli border in the occupied area Golan heights. According to news agency SANA News, the arson was carried out by soldiers of the Israel Defense Forces (TsAKhAL). It spread from the eastern outskirts of the city of Majal Shams to agricultural areas in the north of El Quneitra. Fire extinguished by Syrian firefighters. As a result of prompt actions, it was possible to prevent its spread to adjacent lands and forests..

As is known, The Golan was officially annexed by Israel in 1981 year, which has received widespread international condemnation.

In the afternoon, unidentified attackers took place near the Israeli border. One of the checkpoints of the Syrian Arab Army was attacked (Farm) near the village of Al-Kakhtaniya, resulting in the deaths of two soldiers. Nothing is known about the possible organizers of the raid.. 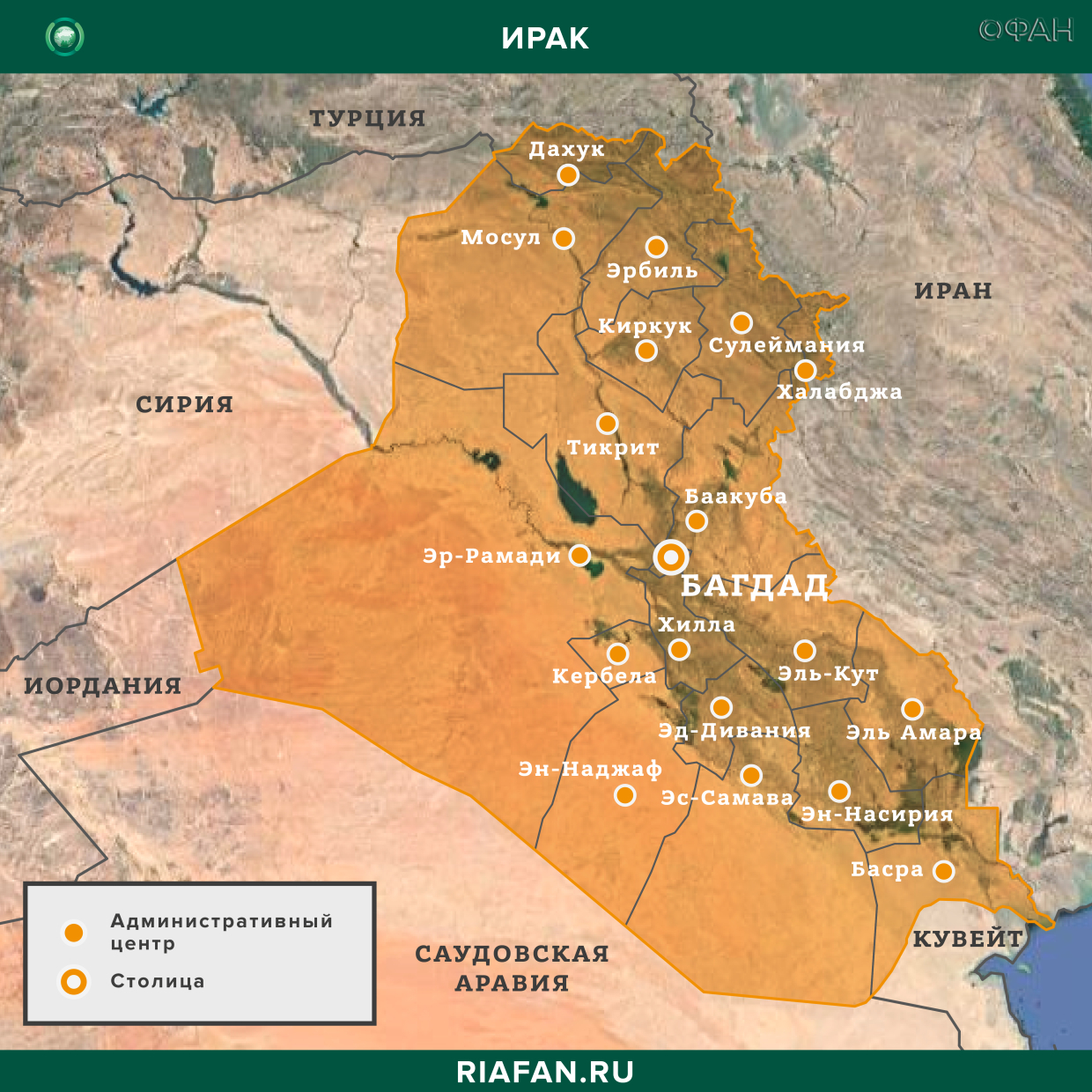 The Turkish Air Force continued to carry out combat missions over Iraqi Kurdistan. Became known, that as a result of pinpoint airstrikes of military aircraft in the area Zap the female leader of the Kurdistan Workers' Party group, banned in Turkey, was liquidated (PKK).

Besides, according to the Turkish Defense Ministry, several PKK caches were discovered in the border areas. They contained ZSU, mines and cartridges. Among other things, containers with substances were seized, used in the manufacture of explosive devices.