Once in the Soviet Union in 1943 Garand rifle, the US not only impressed the testers, but also served as a source of inspiration for Mikhail Kalashnikov

Although at the time of the US entry into World War II rifle Garand (officially - US Rifle, Caliber .30, M1) It was in service for five years, talking about her deliveries under Lend-Lease was not. In fact, by this time Garand has only recently recovered from a number of «childhood diseases», and at some stage the situation was very serious - up to the investigation in the US Congress.

Was not without its problems, and the deployment of mass production, although here Garand rifle had a serious bonus - her designer John Garand himself involved in the design of machines and personally supervised the creation of the necessary equipment for the production of rifles.

There were other bottlenecks, eg, American soldiers in the Philippines, had time to get a certain amount of «Garandov» before the Japanese invasion, very soon we realized, that the presence in the ammunition depots .30-06 does not equal availability of the same in the new cartridges vosmipatronnyh packs for «Garanda». The very same rifle cartridges after discharging threw pack automatically. But even in that case,, when a fighter somehow gained empty packs, peresnaryazhenie them from pyatipatronnyh clips for old «springfildov» It was the thing, you want to do in a hurry, dirt and under fire. 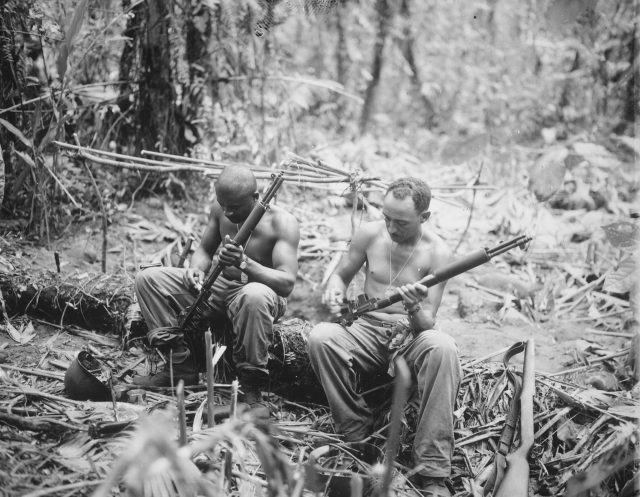 In the USSR, and get to experience the American self-charging could in 1943 year. The theme of self-loading rifles in the Red Army paid a lot of attention, so Garand was extended testing, including a detailed study of automation. For comparison, the results obtained were used Soviet SVT-40 and German self-loading rifle G-41, which we describe separately.

bypassed «Keyboards» rifle SVT-40 and the determination of the practical rate of fire. In the USSR it was considered with the measurement time of loading, aiming and shooting at a target with a circle 100 mm at a distance 100 m. arrows of «Garanda» It managed to shoot an average of 31-35 every minute, CBT for this value was at 10 fewer shots. here again, According to testers, He played the role of rear sight, provide fast and convenient aiming, as well as the convenience of charging the pack and even automatic ejection. The report also pointed out, Americans give for «Garanda» 40 rounds per minute, and for trained marksmen - 80-100.

And even in the difficult conditions of Canadian John Garand rifle has shown itself worthy. On the 400 shots «Keyboards» given all 7 delay - against 41 from rifles Tokarev. So, eg, upon cooling to -50 degrees «Keyboards» on 50 shots given one delay, a SVT - 9 delays. The result was a report item, awarded with fat underscore studied him an officer of the Main Artillery Directorate:

It was also noted, that constructively «Keyboards» easier and SVT has to 22 less details. But it still felt testers, that dismantling, assembly and cleaning «Keyboards» complicated national rifle and requires more natrenirovannosti. The very same big problem found… weight of the rifle - in the opinion of Soviet officers «Keyboards» no longer meet modern requirements.

of course, at 1943 year, no one seriously considered the question of obtaining «Garandov» by Lend-Lease. By the time the Red Army needs small arms overlap existing domestic samples, let alone the fact, that service «Keyboards» proved difficult SVT-40 and crossed out all his dignity.

Besides, a number of American investigation as the then, and modern, show, that high reliability «Garanda» also it was not an absolute value. When dirt gets into the mechanism, especially the top, when used up cartridges, «Keyboards» I had every chance of failure. A battle, As the soldiers reviews, with a good mix of the shelling of the sky to the ground it happened regularly, - because of what gave waivers, in particular, PTR Simon. 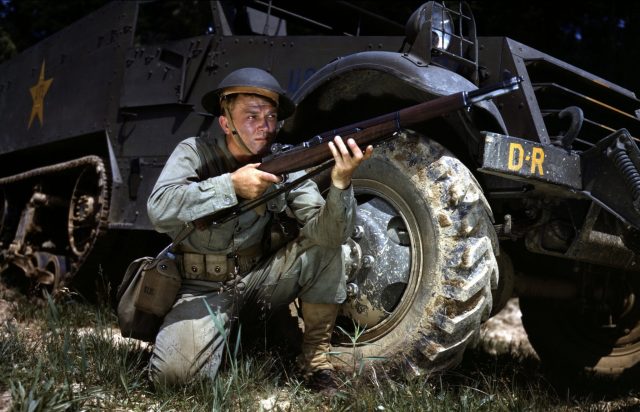 Nevertheless, design «Garanda» aroused great interest among Soviet gunsmiths, one of which was Mikhail Kalashnikov. As he recalled later on the design of its carbine:

"Here I «helped» American designer Garand rifle. his experience, by giving to the idea of ​​cartridges in the receiving window of the rifle and automatic ejection of the empty holder after using the last bullet I, in another variation only, I laid in the design and its automation ".

true, on the tests revealed, that the use of only the ideas of John Garand in itself did not give weapons to the same level of reliability, that was in Rifle. Only after a long and serious revision of the American designer of the locking system is able to contribute to the victory of another sample Mikhail Kalashnikov - his world famous machine.