ABOUT THOSE, Less fortunate 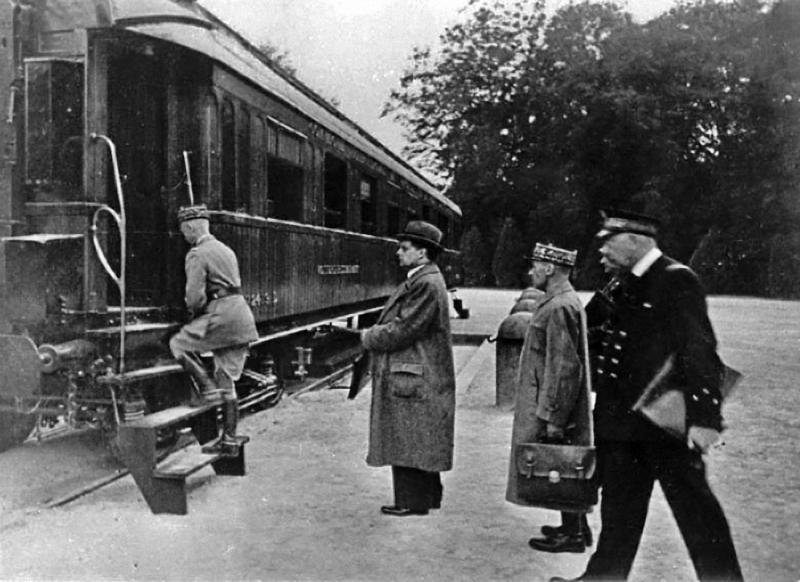 Compiegne armistice was
come into force 11 am 11 November 1918 year European time.
In other words, from that moment the fighting must be stopped from both
part of Germany, and on the side of the Entente.

Recorded many cases, when
most valiant and skillful soldiers on the eve of the world is changing dramatically
behavior at the forefront. Simply put, began to behave with extreme caution,
to say the least. Although behind - months of the war, feats, victory. this
psychological state can be described as "near victory syndrome '.
Killed in war, itself, misfortune, and to die in her last hours and
minutes? What could be more tragic?

It is believed, that the last soldier
UK Army, France and the US were the Englishman George Edwin Ellison, Canadian George Lawrence Price, French Augustin-Joseph
Victorin Trebyushon, American Henry Nicholas John Gunther. Regarding the latter
German soldier no data. But with some certainty
we can talk about the nine German sailors, killed in battle with the British 21 June
1919 , during escorting captive ships Seas Fleet in
British naval base. This battle happened within the MPP, as
Versailles Peace between the Entente and Germany, formally laid her
end, was signed 28 June 1919 of the year. But that is another story. And we turn
to the day, when it entered into force Compiegne armistice.

Englishman George
Allison died a half hour before the truce –
at 9.30. during a patrol in the Belgian city of Mons (50 km
south-west of Brussels). A native of Leeds, Yorkshire, in the north
England, She was an adult man and an experienced soldier. He was born in 1878 year, It was
be, behind him were 40 years of life. In peacetime, he worked at the mine, of which
around Leeds in abundance. I had a family – wife Anna-Maria and his son Cornelius.
Shortly before the start of the PMA enrolled in the 5th Royal Irish Lancers.
He fought in the first days. apparently, not bad, just managed to survive for four to
plus years. But without much brilliance and talent, times and remained an ordinary.

Frenchman Augustin Trebyushon
- odnogodok Ellison. 40-a native of the south of France was killed by a bullet in
10.45. during the battle as they crossed the Meuse (in Belgium - Meuse) at
Province Champagne-Ardennы Between Sedans gardens Charleville mezieres. On the morning of the 163rd Infantry Division received orders to cross the river and
attack position, occupies part of the German Guard. The situation was
complex. Lil heavy rain, water in the river has risen, bridges were destroyed,
They were suffering pontoon in water Chillmere. but before 700 soldiers crossed over to the enemy
north shore. The French lost only killed 91 man. Why and who
I needed this attack, when, under the act of armistice already dried ink,
did not investigate. The victory eclipsed everything. And that was not too many questions, day
death in the documents Augustin and his colleagues recorded the previous number.

Trebyushon, entered into
army in the early days of the war as a volunteer, was it all. Messenger served in 415-m
infantry regiment. He survived the terrible battles of the Marne and Somme, He was wounded twice,
and once - hard. I received the rank of private first class (similar rank
corporal). Happy, it is seen, He was a man, time up to the war was the main
character all holidays in his native village Montkabre - entertaining game of the people
the accordion.

In the hand of a dead messenger found
paper with a message: "Gathering at 11.30. for lunch". After the war, in the town of Vrigne-Meuse, on the outskirts of which he
died, was a monument to the soldiers of the 163rd Infantry Division, namely
Trebyushona was one of the streets.

Two minutes before the truce bullet pierced the chest of George Price.
Everything happened pretty ridiculous. Patrol from Company A of the 28th Battalion of the Canadian
expeditionary force crossed the canal in the town of Ville-sur-Ain and began
inspect homes, one of which was the German machine-gun crew. Ville-sur-Ain
- it is approximately 10 kilometers west of the place, where the latter died
English soldier Allison. Then said goodbye to the last soldier of the United life
Kingdom, since Canadian troops were part of the joint armed
His Majesty George V forces.

checking the house, Canadians have seen, the Germans managed to escape. AND
then Prices, against the advice of the home owner, who knew about working in the district
sniper, I went outside. The shot did not wait. 25-year series
He fell dead. In the army, Price appeared in October 1917 and went to the front
After boot camp. but the place, where he was born and lived, We had to cultivate
It caution and prudence. Falmaunt place in the province of Nova
Scotia in eastern Canada - it is something like our village to the Providence
Chukotka. George was born there. And as an adult, I moved inland, at
Town Moose Jaw. It is in the prairies between Winnipeg and Vancouver. But, looks like,
air victory played a trick on him. AT 1968 year due to the death of 50-th anniversary
Price's, Belgium delegation arrives, consisting of company veterans, wherein
George fought. on the house, about which he died, It was a memorial
with the inscription plate: "In memory of Private number 256265 George Lawrence Price's, 28-and
Northwest Battalion, 6-I'm Canadian Infantry Brigade, 2-I'm Canadian
division, killed in action near this point 10:58 11 November 1918; last
Canadian soldier, who died on the Western Front of the First World War.
It was found by his comrades 11 November 1968 ". Later the house was demolished, but plate
We moved to a special monument, erected on the site of the death of Pryce.
Notably, that he was buried in the cemetery of the village close to Avre
Mons, where there is also the grave of the Englishman Ellison.

Until the entry into force of the armistice remained minute, when US Army soldier Henry Gunther stood up to the attack on
German machine-gun nests in the village of Chaumont-devant-Damvile on the border of Champagne and Lorraine. rose
one, as his direct commander Sergeant Ernst Powell ordered his subordinates
not to leave the shelters. surprisingly, but the German machine gunners shouted a running
Henry, so he stopped and lay down, that they do not want to shoot. And American
well aware that, that cry to him, so I came from a family of German
migrants, moved to the end of the XIX century in Baltimore, Maryland.
East Baltimore was a kind of "doychtaunom", where the predominant ethnic
Germans and talked among themselves in their native language.

Gunther did not stop and was cut machine-gun fire.
The reason for this strange behavior is, Henry was demoted from sergeant
the ranks. The reason was a letter, in which he wrote to a friend about the terrible conditions
service on the Western Front, and advised to avoid conscription. military censorship
censor letter, and Gunther was punished. Such behavior can be naive
explained, that the soldiers simply did not understand the seriousness of affairs in the real
war. Though he was drafted in the fall 1917 of the year, but the 313th Infantry Regiment ("Private
Baltimore regiment ") until the summer of 1918 was in the US. manufactured in
Sergeants Gunter served as a warehouse and was responsible for the soldiers' uniforms. clear, what
field conditions of the Western Front left him in shock. And he opened the heart.
I paid for it, Henry wanted to make something in the battle, that will return him
earnest, and respect. In fact, this single bayonet charge in 10.59. It was for
his only chance.

It is generally recognized, that it was the American Henry Gunther
the last soldier, who died in World War I. Though, it would be necessary to clarify: last
Allied soldier. 11 November 2008 year in Chaumont-devant-Damvile monument was erected
on the spot death of Gunter. AT 2010- m in Baltimore in the cemetery of the Holy
Iskupitelya, where the remains of a soldier moved from France to 1923 year, –
memorial gravestone. By the way, Gunther buried in Lorraine again
sergeant. Commander in chief of all US forces in Europe, General John
Pershing found, that the soldiers deserved forgiveness.