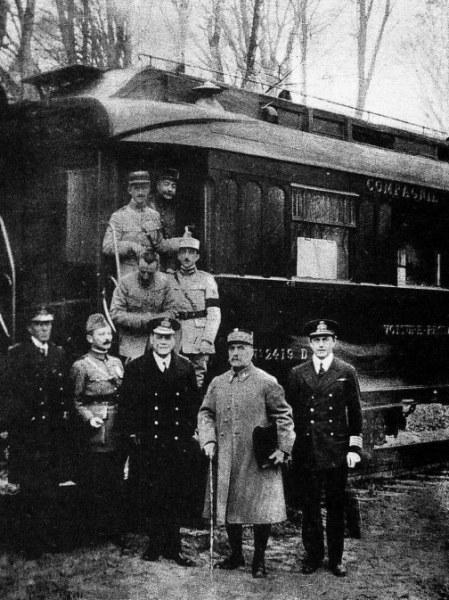 Great wars do not end in
One minute. So it was during World War II. Late in the evening 8 May 1945 of the year (by
European time) extending to the west army group "Center" army received
official confirmation of, in the suburb of the German capital
Karlshorst signed the Act of
the unconditional surrender of the Third Reich. Despite this fighting continued. AT
night 12 May near the demarcation line near the village in the vicinity of Gmina Śliwice
the city of Pribram in the ongoing battle for almost two days by Soviet troops
It was destroyed by the retreating remnants of the Prague Mixed SS divisions headed by
the head of the SS Department of Bohemia and Moravia Obergruppenfiihrer Count
Karl-Friedrich von Pückler-Burghausom. As a part of more than 7000th
German group were the remains of the SS divisions "Wallenstein" and "Das Reich".
Over 6 thousands of soldiers and officers surrendered.

Something similar happened in the
end of World War I. Not only in the Czech Republic, and in the far Northern Rhodesia. so with
1911 It was called colonial possessions of Great Britain in South Africa. After
independence in 1964 Northern Rhodesia was turned into a territory
State Zambia.

In October, the German squad
Colonel Paul von Lettow-Fonbeka based in the territory of the Portuguese
colony Mozambique. Starting in September 1914 Colonel, this led his war
against the British, French, Portuguese in the south of the Black Continent. And it is extremely
successfully. Suffice it to say, that he had not lost in four and a half years not a single
battles. Despite, that the forces were, to put it mildly, not equal. The best time
under his command was going to 14 thousands of people, overwhelming majority -
recruits and volunteers from the local community. They were called "Askeri". personnel
German soldiers and officers - the maximum 2 thousands. At the same time force
opposing coalition reached a number 300 thousand bayonets and sabers.
Lettow Fonbek, It is strategically thinking officer, aware, what
of total victory can not be considered. Therefore, we believe the main task
holding of such hostilities, which would be pinned down on the African theater
considerable enemy forces. As a result of his combat operation went so far,
in Africa from India threw the military contingent, which the
intended for dispatch to Europe, the Middle East and Mesopotamia.

This warlord worth
tell apart. Lettow Fonbek was born into a military family in Germany 1870
year. AT 19 years - artillery lieutenant. The first combat experience was in 1900-1901
Years in China during the suppression of the so-called European Coalition
Boxer rebellion. AT 1904 he served already in the German colony of South-West
Africa (now - the State Namibia), where he participated as a commander
company in suppressing the uprising of the local tribes Guerrero (Bantu people) us (union
tribes of the Hottentots). The uprising lasted four years. German troops
I managed to suppress, and Lettow Fonbek got invaluable experience of the war in
African conditions. After six years of service in staff positions in Germany,
the officer returned to Africa, where from October 1913 he commanded troops in Germany
colony Cameroon, and in April 1914 he was transferred to the German colony
South East Africa.

Barely begun World War I, Lettow was Fonbek
unambiguous orders from Berlin, according to which he was forbidden to conduct
any active actions against neighboring colonies, belonged to Britain,
Belgium and Portugal. He decided to violate the order and began to act on
your own risk, rightly believing, that the best defense - the attack. But
as it has been said above, not being able to conduct direct combat
of action, I chose the guerrilla war. Success was facilitated by the, that subordinates
Askeri he well knew the terrain and possessed skills, it is necessary
for guerrilla war. What could not boast of the soldiers and officers of the Entente.
A typical example. In the battle of the Mahivy in Tanzania in October 1917 , the British
lost more than a thousand soldiers and officers, Lettow Fonbek - up to hundreds
fighters.

It got to the, that the British
Command in South Africa was forced to draw practical
advice of one of the military leaders of the camp of his recent opponents
Boer War Jan Smuts, He held the post of Minister of War and Minister
Finance in British dominion of the South African Union. We are hoping for experience
once the Boer commander, who knew a lot about the partisan ways of doing
war. Smuts, as it appears, not much help. Here's what he wrote in his memoirs he
Lettow Fonbek: "... little mixed
groups numbering from 8 to 10 Europeans and people askari avoided camp
enemy and act on its communications with the rear. Due to production, taken from the
Tanguy, we had the telephones; These groups included them in
English telephone wires and waited, yet by no greater than or passed
smaller enemy units or transports, drawn by oxen. Enemy
shelled ambush a distance 30 m, They were taken prisoners and booty - and patrol
He disappeared again in the endless steppe ".

About Tanguy (one of the largest
ports in modern Tanzania). 5 November 1914 , with support from the British cruisers
the port Tung tried to make a landing in 8 thousands of people. Paul von Lettow-Vorbeck
quickly moved by rail to the coast a thousand fighters. Eleven days after the army
time to dig in and prepare a machine gun firing points. The British landed
on a sandy beach, looks more like a swamp. Besides, wild bees,
Worried unpleasantly spicy smell of sweat, coming from the Hindu soldiers,
tens of thousands of soldiers attacked the regiment of the Indian Bangalore, that
took to his heels under machine-gun fire, getting stuck in beach sand. British
still managed to grab Tanggu, but not for long. Paul von Lettow-Vorbeck spent regrouping
forces, He hits from the flanks and knocked the opponent out of the city. The British ran, leaving
a huge amount of weapons and equipment, so that the German Colonel
I could rearm three askari companies.
The British lost 360 killed and 487 wounded, the loss of the German side
– 71 killed and 76 wounded.

so, a depleted due
epidemic of "Spanish flu" detachment Lettow Fonbeka crossed the border of Northern Rhodesia and prepared
for new battles on enemy territory. In its ranks remained 30 officers and 125
non-commissioned officers and soldiers of the German army and the actual 1168 soldier. 11 November
1918 of the year, when in the Forest of Compiegne armistice has been signed between the two countries
Allies and Germany, to fight squad took the town Kasama.

According to some sources the British General Jacob
van Deventer (ethnic drill) He said Lettow Fonbeku signed on in France
document the next day – 12 November. On the other - the German colonel found
this fact by chance - 14 number. Relevant papers were found in a bag
in captive British officer Hector Crowd. but, only 23 November
Colonel decided to surrender his unit captured.

There is a stereotype: soldiers,
mobilized from the colonial population, They were brave, but inept. So what
even worse - did not know the discipline. After almost half a century after the events, right after
death Lettow Fonbeka German Bundestag in memory of him decided to find
served in his squad Askerov and pay them a bonus. German representative is
I knew, how to identify deserving veterans among Tanzanian
elderly. no documents. Oral evidence - do not count. And osenilo. Desired
get a pension put into operation. Thundered commands in German. And they
They were performed by black veterans perfect.

In published during World War II is still in 1920
was retired with the rank of Major General Lettow Fonbek lost two sons, but
Hitler's offers to serve the Third Reich refused. Nazism is not
recognized. Died in 1964 year.